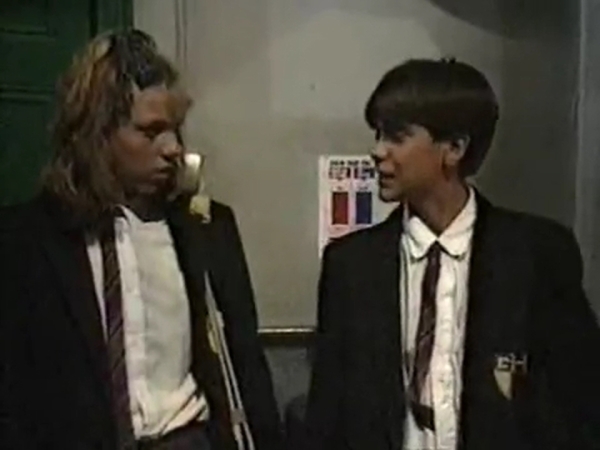 The episode begins with Akik in full flight. POV shots and dramatic music are to the fore as he desperately races across the playground and down a flight of steps to the basement. His pursuers? The Timpson brothers of course, intent on creating mayhem.

The interesting twist with this scene is that it doesn’t go any further – no sooner have the Timpson duo started to put the frighteners on, than they’re shooed away by Raju (Carl Pizzie) who’s in the company of Natalie, Justine and Becky.

One of those GH pupils who suddenly appears from nowhere (and will vanish just as abruptly in a handful of episodes’ time) Raju is something of an entrepreneurial wide boy. The spirit of Pogo and Gonch lives on.

Pizzie’s performance is best described as average, although given his acting inexperience no doubt it wasn’t easy for him to have been flung into the deep end like this. Still, slightly annoying as Raju is, he pales into insignificance after we meet his older cousin Rikki (Dhirendra).

Raju sees there’s a profit to be made from the girls’ t-shirt printing process and puts them in contact with Rikki who can supply good quality clothes for a cheap price (no questions asked, naturally). Rikki’s character is deftly defined within a matter of seconds – blaring music from his van and the furry dice that dangle from his front mirror tell their own story.

This t-shirt plot has yet to get the pulse racing, although there are some good dramatic moments elsewhere today.  Highlight of the episode is Tegs’ interview with his social worker. It takes place in the social services office, which has an air of quiet desperation (reinforced when the camera tracks past several other unfortunates before locating the office where Tegs is).

Mr Hargreaves has announced the members of his Vigilance Committee – Ted and Trev are in, but several others aren’t. Some, like Robbie, couldn’t care less whilst Mauler quietly seethes at the way he’s been overlooked (a nicely played moment which helps to make up for some of Mauler’s more irritating “comedy” scenes of years gone by).

Ronnie and Calley are also annoyed at being overlooked, which is slightly more surprising – maybe they were looking forward to exercising a little authority? Mind you, given how many sixth-formers there must be in the school, it would stretch credibility to breaking point if they were all drawn from the eight or so speaking regulars in the series.

At long last there’s an article in the local paper about the pub fight. Since a number of days have gone by, I can only assume that news travels very slowly in that part of the world. Mike’s ever-so-slightly frantic, whilst Robbie doesn’t seem to twig at first what he’s on about. This handily allows Mike to explain to the audience exactly what happened. It’s a slightly clumsy scene, but back in the day when all the episodes of a series weren’t available at the touch of a button you had to sometimes bring latecomers up to speed.

A tired and listless Matthew is given a ticking off by Mrs Monroe. She believes he’s been staying up late at night watching movies. Although he doesn’t deny this, he doesn’t confirm it either – and since we know how wretched his home life currently is, it’s possible to draw a different conclusion from his current demeanor. It’s a slight mark against Mrs Monroe that she didn’t actually ask him what the problem was (even though what we know of him from past experience would suggest he’d lie or keep quiet anyway).

Chrissy and Justine begin spray painting their t-shirts in their workshop (a room in the basement found for them by Rod). If the audience were slow on the uptake that the room (lacking windows) was badly ventilated, then the ominous incidental music is there to provide them with a blatant nudge in the right direction.

And wouldn’t you know it? Just as the girls begin to find the fumes overpowering, the Timpson brothers return and lock them in. The discovery of Chrissy and Justine’s unconscious bodies provides the episode with its cliffhanger. 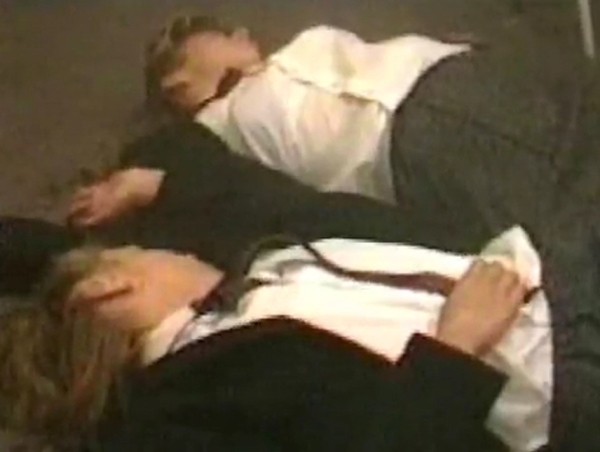 Leave a Reply to Michael B Cancel reply