Bob Kellett (1927 – 2012) was a man of many talents. Particularly active during the sixties and seventies, he plied his trade as a writer, producer and director. As director he helmed big screen adaptations of several small screen favourites such as Up Pompeii and Are You Being Served? whilst his television writing career included both admags (those curious programmes which turned up in the early days of ITV) and Space 1999.

Kellett also produced the four short films included on this BD/DVD (Futtocks End, A Home Of Your Own, San Ferry Ann and Vive Le Sport) in addition to writing the screenplay for San Ferry Ann and directing Futtock’s End.

Taking pole position on the disc is Futtock’s End (1970, 47 minutes) which was written by and starred Ronnie Barker. Clearly inspired by Kellett’s earlier works, Barker would return to this style of comedy several times in the future (The Picnic, By The Sea) but Futtock’s End was his best work in the genre.

Set in an English country house, Barker is wonderfully entertaining as the befuddled General Futtock, who has his hands full with a gaggle of weekend guests. Barker is matched every step of the way by Michael Horden as his lecherous butler whilst familiar faces (including Roger Livesey, Peggy Ann Clifford, Julian Orchard and Richard O’Sullivan) also pop up.

Barker’s unquenchable thirst for saucy seaside postcard humour would surface again and again during his career and Futtock’s End is a prime example of this. So it comes as no surprise to discover that various attractive young women (such as Hilary Pritchard, credited as ‘The Bird’) are used throughout as little more than eye candy. Subtle the humour isn’t – the rule seems to be that ladies’ skirts should be as short as possible and fly up at every opportunity …

A ‘silent’ film with sound effects but no dialogue (like the other films on the disc) Barker is deftly able to mine comedy gold from this apparent restriction. For example, the breakfast scene (where a group of very hungover guests recoil in horror as every small movement of the breakfast things generates impossibly loud sounds) is just one highlight amongst many.

Ronnie Barker also features in A Home of Your Own (1965, 41 minutes).  Written and directed by Jay Lewis (John Whyte was the co-writer), Richard Briers, Peter Butterworth, Janet Brown, Fred Emney, Bernard Cribbins, Bill Fraser, Ronnie Stevens, Thorley Walters and Gerald Campion were some of those who appeared alongside Barker.

Briers and Bridget Armstrong play a newlywed couple who buy a plot of land on which they intend to build their dream house. But thanks to a group of inept workmen progress is far from smooth …

A sly satire, A Home of Your Own plays on the familiar theme of the British workman as lazy and/or incompetent (for them, the tea-break is always the most important time of the day).

By the time of Futtock’s End, Barker was a star but during A Home of Your Own he was only just beginning to build his reputation in the worlds of film and television. But though his role isn’t very large, he does have one very memorable moment – after an unthinking colleague wanders across his wet concrete floor for the umpteenth time, he snaps and performs a frantic pirouette on the ruined floor (it’s a sight to behold).

Bernard Cribbins – as a hapless stonemason – probably has the best comic material to work with, whilst the likes of Butterworth and Fraser always catch the eye, even when they appear to be doing very little.

A travelogue following a group of British holidaymakers as they take a trip from Dover to Calais, San Ferry Ann certainly benefits from oodles of local colour on both sides of the channel (quite what the ordinary cross channel ferry passengers thought about inadvertently featuring in this film is anybody’s guess).

Several of the actors play very much to type. Brambell begins by using his trademark leer to good effect and it doesn’t take him long before he’s gone topless on the ferry  – attempting, but failing, to catch a bit of sun. As for Barbara Windsor, she isn’t a million miles away from her Carry On persona – a pneumatic blonde who blithely breezes through the frame whilst constantly turning male heads.

No cultural cliché is left unturned once the holidaymakers reach Calais (one of the first Frenchmen we meet is riding a bicycle with a string of onions round his neck) but San Ferry Ann is still a very agreeable watch. And for Coronation Street fans there’s a spot of trivia to share – this was Lynne Carol’s first role after her Street character (Martha Longhurst) was killed off the previous year.

After two black and white shorts, we burst back into colour for Vive Le Sport (1969, 25 minutes). Eschewing the all-star nature of the other features, this one centres around two swinging sixties chicks (played by Liane Engeman and Beth Morris) who set off for a road trip across Europe in their Mini Cooper, unaware that they’re being pursed by Barry Gosney (he’s keen to retrieve a roll of film hidden in the car).

Vive Le Sport was Engeman’s sole credit but Morris would become a familiar television face in the decades to come (possibly her most memorable role was that of Drusilla in I, Claudius). Neither actress is stretched during this film though as it’s plain that the car’s the star (with the scenery running it a close second). Unlike the other features on the disc, this isn’t a gagfest and the subplot of the girls being pursed by the ‘baddies’ isn’t edge of the seat stuff. Instead, you’re well advised just to sit back and enjoy the ride.

San Ferry Annie is a five minute interview with Anne Kellett, Bob Kellett’s widow. Even though its running time is very brief, there’s still time for Annie to share a few interesting stories – such as the reason why her husband began to make silent films, as well as some memories concerning the making of San Ferry Ann.

Feature First (7 minutes) interviews director of photography Billy Williams. San Ferry Ann was one of his earliest jobs but he quickly moved into features (he racked up many credits, most notably Gandhi in 1982).  Given his career I obviously could have listened to him talk for a great deal longer, but this featurette is a good overview of his work on San Ferry Ann.

Futtocks End features an archive audio commentary with Bob Kellett which is worth dipping into as he had plenty of good stories to tell. The last special feature on the disc is an 8mm version of Futtocks End, which runs just under nine minutes (this savage abridgment is a curio worth watching at least once).

This very attractive package is rounded off by a booklet written by Melanie Williams.

All four films have been restored and are presented in their original widescreen aspect ratios. To compare, I dug out my old DVD copies of A Home of Your Own and San Ferry Ann (released by Digital Classics). The new Network remasters offer a considerable picture upgrade (the Digital Classics releases were in 4:3 and speckled with dirt and dust).

Futtocks End and Other Short Stories comes warmly recommended. It’s released today and is available from Network both on BD and DVD. 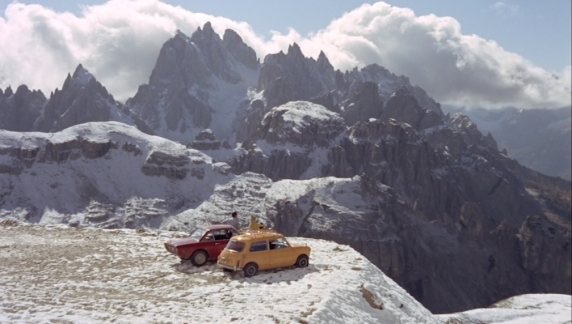