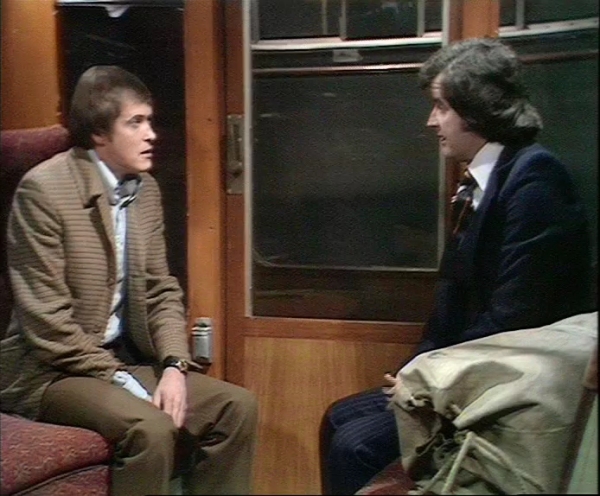 Strangers on a Train, the first episode of Whatever Happened to the Likely Lads?, was broadcast on BBC1 in 1973.

There might be previous examples which have slipped my mind, but WHTTLL has to be one of the first sitcoms which allowed its characters to grow and develop. Most sitcoms prior to this (Steptoe & Son or Dad’s Army, say) existed in a kind of stasis, but the Bob and Terry of 1973 were certainly different from the young lads we first met in the early sixties.

Given Bolam and Bewes’ later estrangement, it’s hard not to rewatch the series without pondering how far real life mirrored fiction. Graham McCann’s summation of their relationship (click here) might be a little waspish towards Bewes, but it does help to redress the balance previously painted (largely by Bewes as a victim, it must be said).

Throughout WHTTLL it becomes obvious that Bob and Terry have little now in common and it’s mainly the ties of childhood friendship which still keep them together. For Bolam and Bewes during the 1970’s, it was only the work that kept them together – like Bob and Terry they were totally different people with few shared interests.

Mind you, I don’t have a problem with discovering this and am always surprised when someone states that they find it difficult to now watch the series after learning that the stars weren’t the best of friends. For me, they’re simply giving an acting performance – and if they convince, then they’re very good actors.

The Grand Design, the first episode of Yes Prime Minister, was broadcast on BBC2 in 1986.

I think that the first series of YPM has to be my favourite run of episodes (Yes Minister was always consistent, but these eight episodes just have the edge). By now the formula was well established, the three regulars were totally comfortable with their characters and the elevation of Jim Hacker to the PM’s chair gave the series a little extra spice.

Sitcom fans were well catered for this evening, as you could then switch over to BBC1 to catch the first episode of Blackadder II – Bells.

Sirens, the first episode of Rockliffe’s Babies, was broadcast on BBC1 in 1987.

For the best part of thirty years the BBC pumped out a series of top-rated police series – Dixon of Dock Green, Z Cars and its various sequels and Juliet Bravo. After Juliet Bravo came to an end in 1985, they struggled to find a long-running replacement.

Rockliffe’s Babies briefly looked like it might have the legs, but in the end it only ran for two series. Oh, plus there was the faintly bizarre spin-off in which Rockliffe became a country copper (which was almost as jarring as seeing DI Maggie Forbes in the C.A.T.S. Eyes environment).

Reviewing it now, Rockliffe’s Babies is patchier than I remember, but there are some strong episodes and it has the same urban feel of The Bill from this period (like its Thames counterpart, the show was shot entirely on VT).

Ian Hogg’s always good to watch (although in this one he’s only called upon to utter a few words) and maybe casting seven relatively unknown young actors was done in the hope that one or two stars might emerge who could then be given their own series (as had happened with the likes of Auf Wiedersehen Pet). Most are still acting today, although Susanna Shelling’s post Rockliffe career was fairly brief (her last television credit was in 2007).