Drake is in El Dura, a Middle Eastern country whose government has grown rich from the sale of heroin. Determined to stop the flood of these narcotics into the US, Drake enlists the reluctant assistance of Captain Aldrich (Donald Pleasence), a minor official in the El Dura government, who has the information Drake needs ….

Once again there’s no voice over during this episode and there’s another sign that the series is becoming more confident that the audience will get quickly up to speed (the episode opens with a brief establishing shot of New York but there’s no onscreen caption to hammer this point home).

Drake’s clearly knows New York well (several people call him Johnny, which is a tad disconcerting) although his stay today is brief. Calling on an old friend, Paul (John Phililps), he’s horrified to learn that Paul’s daughter is now a junkie. This is revealed in a striking – if rather melodramatic – way. Paul, in his luxurious apartment, lingers over a photo of his daughter on the sideboard (youthful, smiling) before showing Drake another photo (a police mugshot of his now hopeless looking daughter).

After deciding that rounding up the pushers will do no good, Drake heads off to El Dura, intent on extracting a list of the organsations the government sells the heroin to. The drug aspect of the story then becomes a Macguffin (the list could be about anything) as from now on the episode centres around the manipulation of the hapless Aldrich.

Pleasence’s second Danger Man appearance is a memorable one and he’s responsible for making the episode so watchable. Aldrich is a British ex-pat, ex-public schoolboy who pretends that he holds a position of trust (as per the episode’s title) but is nothing more than a minor clerk, barely tolerated by his superiors.

Drake decides to gain his trust by posing as an old boy from the same public school (so McGoohan gets to drop the American accent for a while and try out an English one). Aldrich is pathetically grateful to meet anyone from the old country and immediately latches onto Drake. The question is then posed as to why Aldrich has never returned home – we’re not given a definite answer but the arrival of Mrs Aldrich (Irene Prador) strongly hints that since his wife is a local, he might be concerned about the welcome she’d receive in the UK.

Austrian born Prador (possibly best known for playing Mrs Lemenski in Dear John) provides subtle support to Pleasance. Both Mr and Mrs Aldrich seem to be decent people, which makes Drake’s ruthless manipulation of Captain Aldrich all the more cruel (Drake no doubt believes that the ends justify the means).

Having plied Aldrich with drink and encouraged him to lose heavily at the roulette table, he’s now forced by Drake (back with the American accent) to steal the document he needs. That Aldrich is no sneak thief is confirmed by the fact that he walks out of the office with the secret file in full view – immediately alerting Fawzi (Martin Benson).

A comedy then plays out in which Drake manages to manipulate Fawzi, the end result being that Drake and Mr and Mrs Aldrich are unable to be charged but will be deported by an irritated government immediately. Drake promises to use his contacts to find Aldrich a new job (who, after realising the horror of the heroin trade, has now regained his self respect).

Everything’s wrapped up neatly then, although you could argue that it’s just too neat. Maybe later in the series’ run the innocent Aldrich might have been sacrificed, giving us a downbeat ending, but here everything concludes happily.

With Lois Maxwell also featuring strongly as Drake’s local contact Sandi Lewis, Position of Trust is a compact and satisfying script by Jo Eisinger (one of six he wrote for the first series). 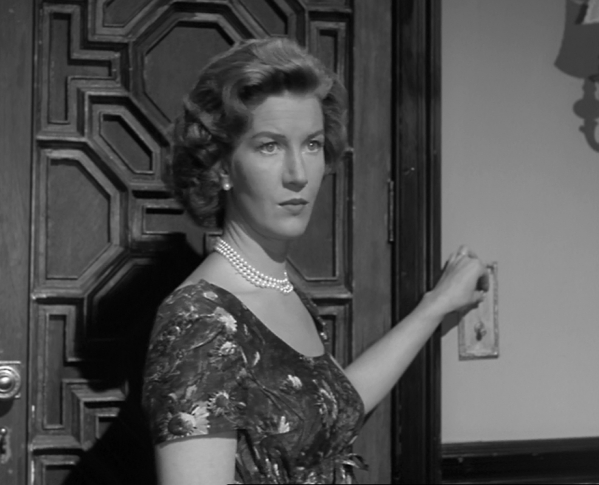 One thought on “Danger Man – Position of Trust”