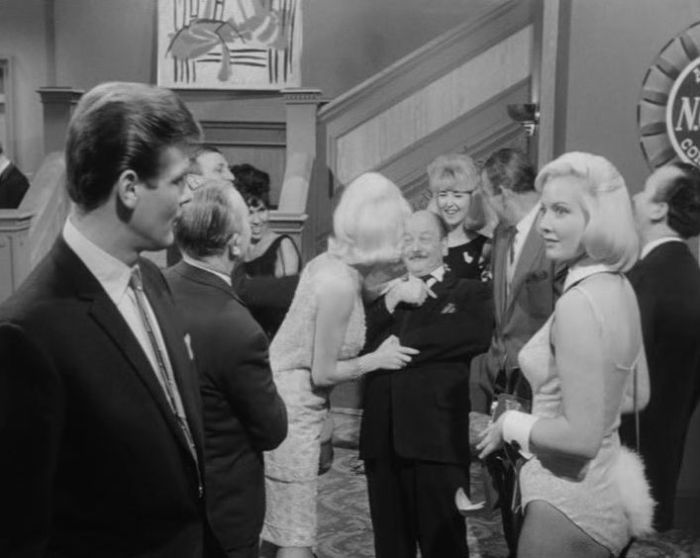 Otis Q. Fennick (Barry Jones) approaches the Saint for help. He’s been caught in a compromising position in his hotel room after a scantily-clad, attractive young woman, Norma Upton (Jacqueline Ellis), was thrust upon him, whilst a photographer, Vern Balton (David Bauer), took several incriminating snaps (paid for by Fennick’s wife, Lianne). But after Balton is murdered, Simon has a complicated mystery to unravel ….

Simon is indulging in one of his favourite pastimes – observing the foibles of others.  He’s staying in the same hotel as Fennick and his colleagues (a group of middle-aged businessman who, since they’re attending a convention far away from their wives, take the opportunity to cut a little loose).  Well most do, Fennick remains somewhat straight-laced.  He’s also not terribly American.  Presumably Guernsey-born Jones didn’t feel confident in adopting an accent – although most of the other cast were American or Canadian born, which helps with the authenticity.

David Bauer, making his second Saint appearance, casts an effectively evil shadow as the slimy Balton – although this is a much smaller role than his previous one (he’s bumped off mid-way through).  Jeanne Moody draws an immediate boo-hiss as the conniving Lianne Fennick, the scarlet woman scheming to divorce her husband and pocket a sizeable alimony payoff along the way.  Quite what poor Otis saw in Lianne is a bit of a mystery – but then, love is blind.

Although most of the performances are pitched at a steady level, somebody is doing something a little different.  That’s Alexis Kanner, always an idiosyncratic actor.  Kanner plays Alec Minser, Norma’s jealous boyfriend (it’s fair to say that he’s somewhat upset that she’s been posing for suspect photographs with Balton).  Since Alec is written as a somewhat unstable character you could argue that Kanner was perfect casting, since this was his usual stock in trade.  He certainly ensures that Alec comes across a twitchy, unpredictable type.

Alec becomes suspect number one for Balton’s murder and is taken downtown to be grilled by the grim Detective Williams (British born Robert Arden, managing a decent American accent).  This seems far too obvious though (and the Saint wasn’t involved in his capture) so there clearly has to be a twist along the way.  The last twenty minutes or so, when the Saint turns detective in order to unmask the true culprit, are the most effective of the episode since there’s a decent mystery to unravel (even if the list of suspects is rather small).

Taken from the short-story collection The Saint Sees It Through (published in 1959), Charteris’ tale has a few incidental details missing from Norman Borisoff’s teleplay.  Such as the reason why Simon’s somewhat slumming in a very average hotel with a group of boisterous executives (the convention types have so monopolised all the hotels in the area that the Saint concludes he’s lucky to have found a room anywhere).   Although the television Fennick, like his literary counterpart, is head of a sweet company – in print much more fun’s made with this.  Simon, on first hearing his story, ponders if it’s all a gag perpetrated by one of his colleagues.

If some prankster in this Convention is trying to sabotage your bid to be elected Supreme Lollipop by charging you with dissolute habits, the foul conspiracy may yet boomerang. With your new reputation as the Confectionery Casanova, you might become the hero of the Convention. Think what a few shots like that did for Brigitte Bardot.

Possibly the biggest change is reserved for the end.  I won’t disclose the identity of the murderer, but in print Simon is happy to let him or her walk free (considering that the murder of a blackmailer is an acceptable crime) whilst the television Saint is a much more law-abiding type.  As touched upon previously, Simon’s vigilante aspects had to be toned right down when the series was developed, in order not to affect the sensibilities of the watching millions, and this was something which rather neutered the character at times.

Not the best the series has to offer then – partly because of the changes made, but also because the story never really clicks into gear until we’re more than halfway through.  But the performances – especially Kanner and Jones – are strong, and this is enough to make me score it three and a half halos out of five. 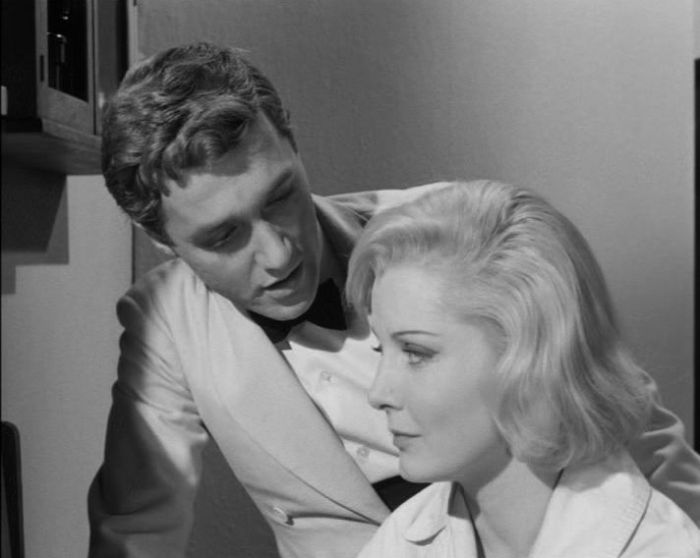