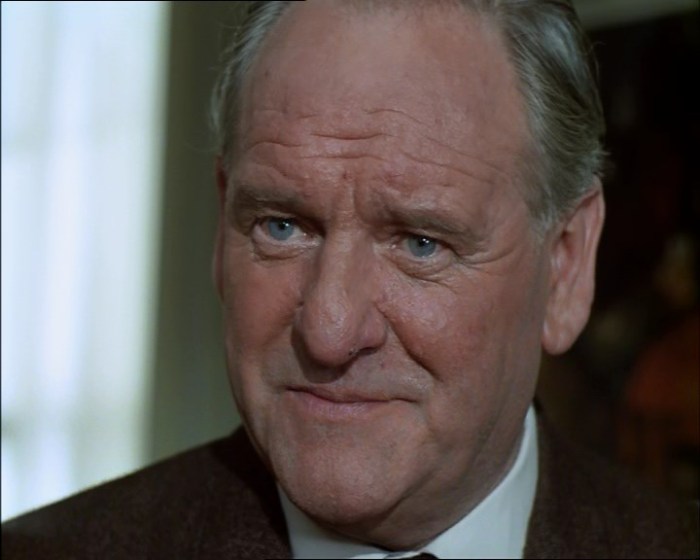 Two journalists stumble across a bizarre research facility in Wales, run by a man called Squires (Bernard Lee). One of the journalists is killed on the spot but the other – Frank Nicholls (J.G. Devlin) – escapes and contacts his friend Richard Barrett. Richard investigates and quickly finds himself in deep trouble ….

We open with yet another highly unconvincing day for night shot (given the vagaries of the British weather, it’s a shame these scenes always seemed to be filmed when the sun was especially bright).

Frank’s a bit of a cold fish. After breaking in, he hears someone approaching but doesn’t think to warn his pal (Frank just nips off a bit sharpish). And isn’t he a bit old for this cloak and dagger stuff anyway?

Post credits, Craig uses his superpowers to free a child who’s got his head trapped in some railings. A handy skill.

The early part of the episode revolves around the mystery of General Patterson who may or may not be dead, but whose body has disappeared (it’s ended up in suspended animation in Squire’s establishment). At first it seems like Patterson will be an important part of the story but it turns out he’s nothing more than a Macguffin.

Why has Richard gone it alone in Wales? It seems pretty pointless, since he leaves an obvious trail which Craig and Sharron follow at Tremayne’s behest.

I was looking forward to the hotel receptionist sporting a nice Welsh accent but no such luck. We later see an uncredited Talfryn Thomas as a garage mechanic though, so that’s some consolation ….

And apparently the only trains running in Wales are steam ones. Well they do look nice.

Devlin gives a good turn as the doomed Frank. Even better is Bernard Lee as Squires (Squires kills Frank in a particularly nasty way – with petrol and some matches). Lee was always an imposing sort of actor and easily dominates every scene he appears in. He might have been battling demons at this point (his issues with alcohol are fairly well known) but was professional enough not to let it interfere with his performance.

Given this is a Terry Nation script it’s possibly not surprising it has some science fiction overtones. But construction wise it’s a slow burn – Richard spends the first half of the episode lurking about whilst Craig and Sharron are several steps behind him. We really want to see Richard and Squires face off, but it takes a long time before that happens.

On the plus side, William Gaunt gets to act mean and moody in a leather jacket before getting frozen for his pains, whilst the presence of Ann Lynn and Philip Locke helps to bolster the cast. I also never say no to a touch of Sharron in fighting mode. It’s also nice to see her cosplaying as the Fifth Doctor.

The plot’s a bit thin but there’s enough going on to award The Body Snatchers three and a half out of five.