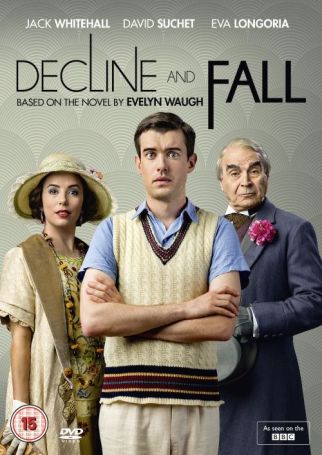 When Paul Pennyfeather (Jack Whitehall) is expelled from Oxford through no fault of his own, he finds his employment options to be rather limited.  So he travels to Wales to take up a position as a teacher at a rather inferior public school, run by the intimidating Dr Fagan (David Suchet).  Everything seems bleak until he spies the beautiful and wealthy Margot Beste-Chetwynde (Eve Longoria) …..

Evelyn Waugh’s classic class satire, first published in 1928, turns out to be surprisingly contemporary.  James Wood’s adaptation wisely doesn’t stray too far from the original source material, so much so that some of Waugh’s most biting dialogue is lifted verbatim from the page.

The first episode finds Paul in Wales, Llanabba to be precise.  Mr Levy (Kevin Eldon) who sends him on his way, tells him that the school he’s going to doesn’t have a terribly good name.  “We class our schools into four grades here: leading schools, first-rate schools, good schools, and schools.  The status of this school is … school.  And school is pretty bad.”  Eldon is just one of a number of quality actors who pop up in cameo roles, indeed the strength in depth of the casting is one of Decline and Fall‘s great assets.

David Suchet has some wonderful scenes throughout the first episode.  In one of the DVD featurettes he mentions that he hasn’t played comedy for some time and it seems plain that he’s enjoying himself enormously.  Fagan’s tirade against the Welsh is a classic Waugh moment which Suchet delivers impeccably.  “I do truly believe that the Welsh are the only nation in the world that has produced nothing of any worth.  The produce no painting or sculpture, no architecture or drama of any kind. They just sing.”

Three other grotesques – Grimes (Douglas Hodge), Prendergast (Vincent Franklin) and Philbrick (Stephen Graham) – are also lurking in and around the school.  Grimes and Prendergast (or Prendy as he’s known) are Paul’s fellow tutors whilst Philbrick is the intimidating school porter, a man complete with a colourful, mysterious and ever-changing past.  Like Suchet, it’s easy to see that Hodge, Franklin and Graham are relishing the material, although they manage to keep their characters grounded in some sort of reality.

Although Grimes is a comic character, wooden leg and all, the comedy is rather dark.  Hodge is able to make him appear rakishly appealing even if it’s plain that there’s something nasty lurking just below the surface.  Franklin is touching as the drunken, wig-wearing Prendy – a man who agonises through every school day – whilst Graham casts an imposing physical presence as Philbrick.

The disastrous sports day – with Prendy firing his starting pistol at one of the unfortunate pupils – is a fabulous early set-piece although this turns out to be another example of Waugh’s dark humour.  In the second episode we see the unfortunate boy shot by Prendy having his injured foot amputated and in the final instalment we’re casually told that he died.

Grimes’ wedding to one of Dr Fagan’s daughters early in the second episode is another delightful scene, thanks to Hodge’s immaculate playing.  Poor Grimes is really not keen to get married for several reasons and spends the ceremony desperately hoping that someone will step up to give a just cause or impediment.  Alas, nobody does and when Grimes’ clothes are found a few days later on the beach it appears that he’s taken a pretty permanent way out.  Or has he?

Episode two is where Paul’s relationship with Margot deepens.  Like the others, she’s a bizarre creation – albeit very attractive – and Longoria is perfect in the role.  Paul loves her deeply whilst she responds with an air of absent-minded affection, although she does finally agree that it might be pleasant if they did get married.

Surrounded as he is by effortless scene-stealers, Jack Whitehall has by far the most challenging part to play.  Paul has to be the still centre – sensible and honest – otherwise the grotesques have nothing to reflect against.  That Whitehall manages to make Paul much more than just a pompous prig is greatly to his credit – his role may be less showy than the others, but it’s just as skilled.

He gets some good comic moments though, such as when he demonstrates his piano skills to a roomful of Margot’s friends (he can’t play a note). Paul announces that his piece is thoroughly modern in style, which is the prelude for a discordant cacophony of noise which leaves most of them thoroughly nonplussed.

If there’s a theme to the story, then it seems to be that wealth and privilege ensure that you never have to face the consequences of your actions (something which seems as relevant today).  In the first episode, Paul is the one sent down (expelled) from Oxford purely because the real troublemakers – all from affluent families – could afford to pay their fines, whilst Paul – from a more humble background – couldn’t.

This is somewhat mirrored at the start of the final instalment after Paul is arrested for his part in a white-slavery ring.  Again, he’s innocent – it’s Margot who’s the guilty party – but he can’t bring himself to name her (plus it’s strongly implied that the establishment would never believe him anyway) so he finds himself sentenced to seven years penal servitude.

It’s a rather unlikely coincidence that both Grimes and Philbrick are his fellow prisoners whilst Prendy turns out to be the prison vicar (a sudden career change after he decided that the life of a schoolmaster wasn’t for him) but by this stage of the story there’s little point in complaining about a certain lack of naturalism.  The prison episode gives Philbrick the chance to display a more human side to his nature, Grimes to make a daring escape on horseback (an impressive feat for a unidexter) whilst Prendy’s exit is the most memorable of them all ….

There’s a pleasing circular path to to Paul’s journey. After he’s sprung from prison with the aid of Dr Fagan, he’s able to fake his own death and return to Oxford as his own distant relation.  Maybe second time around things will work out right.

Acorn’s DVD has three featurettes (all around five minutes each) – Adaptation, On Set and Satire.  With such brief running times they obviously don’t go into great detail, but they do feature short interviews with all the main cast, plus James Wood and director Guillem Morales.  A short picture gallery is also included.

Laugh-out loud funny in places, somewhat disturbing in others, Decline and Fall is a sparkling comic treat, albiet one with a strong cynical streak.  Following the somewhat lumpy adaptation of Len Deighton’s SS-GB (somehow one of Deighton’s best books was transformed into a six-hour plod) Decline and Fall shows that the BBC hasn’t completely lost the ability to mount a successful adaptation of a literary classic.