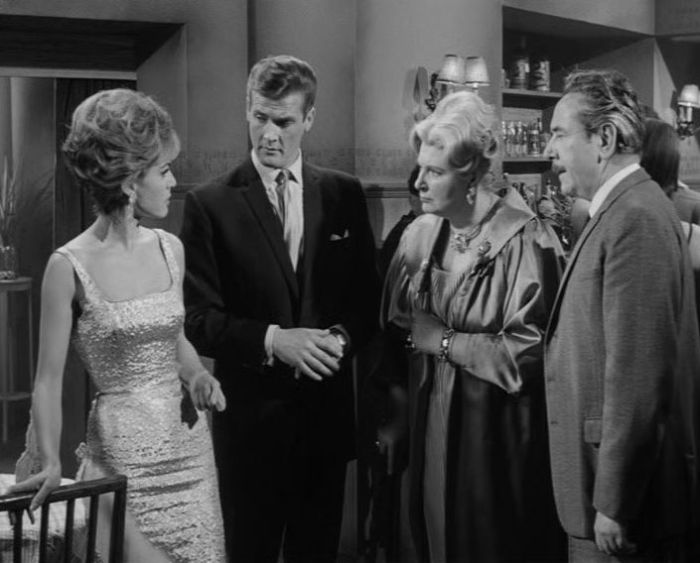 Simon travels to Hamburg, at the behest of the American government, in order to investigate a fine art smuggling ring.  He has an “in” – since a former girlfriend, Lili Klausner (Margit Saad), seems to be implicated.  The Saint quickly works out that the sinister Dr Ernest Zellerman (Joseph Furst) is a key man, but finding evidence against him proves to be tricky ….

The Saint Sees It Through has a decent noirish atmosphere, with Simon meeting taciturn contacts on dark street corners before dodging into Tante Ada’s –  a smoky nightclub where Lili plies her trade.  Moore isn’t doing much during these early scenes, but as the cliché goes – less is more.  He enters the club whilst Lili is in mid song and moves to stand directly in front of her.  This could be taken as an oppressive gesture, but Lili doesn’t interpret it as such.  Later, as they share a drink, he asks her why she walked out on him several years back.  It’s unusual for Simon to show concern about a former relationship (like James Bond he generally tends to love them and leave them) but it may be that he’s simply using this as an excuse to re-establish a link with her.

Also at the club is Dr Zellerman, who has arranged a date with Lili.  But after Simon appears, she declines Dr Zellerman’s invitation – which rather infuriates the good doctor.  Luckily Simon’s on hand to forcibly teach him that good manners cost nothing.  Whenever I see Joseph Furst it’s hard not to have one line of dialogue running through my mind (“nothing in ze world can stop me now!”) but there was a good deal more to him than that over exuberant Doctor Who guest appearance.  Elsewhere he tended to be – as here – much more restrained and sinister (Furst carved out a very decent niche playing villains).

It was a good move to cast Margit Saad, a German actress, as Lili.  No doubt many British actresses could have played the role just as well, but Saad is naturally more authentic.  Mainly plying her trade in German-language roles, this was therefore something of a rare English-language excursion for her.  Given this, you might have expected her to be a little stiff, but that’s not really the case – or if it is, then it suits the character.  Saad also has several musical credits to her name, so it could very well have been her vocals which were used for the nightclub scene (it was fairly common for anonymous singers to dub beautiful actresses who weren’t such beautiful vocalists).

Guy Deghy makes his second Saint appearance (here, looming with menace as another member of the smuggling ring) whilst Elspeth March, a veteran actress with an impeccable list of stage and screen credits, plays Tante Ada – the slightly blowsy nightclub owner who is also connected to the nefarious goings on.  This means that the Saint has a number of adversaries to battle against – but is Lili one of them?

Her connection to the smugglers remains nebulous for a while, although Simon – in the course of a little light burgling of Dr Zellerman’s office – finds her details in his card index file.  She then explains to Simon that she’s his patient (Zellerman is a psychiatrist) which Simon has a hard time in believing.  “You’re no more mentally ill than I am” he tells her.

You have to be impressed at Simon’s snap diagnosis (presumably those people who do have issues display physical traits).  He’s convinced that Dr Zellerman has waged psychological warfare on her, in order that he can then bend her to his will.  Since this turns out to be the case it luckily lets Lili off the hook in terms of being a complicit criminal (although it also serves to reinforce Simon’s prejudices that it was laughable to believe that an attractive young woman could possibly have had mental health problems – not such a good thing).

There’s some impressive dressing gowns on display during this episode.  Firstly, Carl (Guy Deghy) sports a natty little number when Simon comes a calling.  The Saint puts the screws on him, which is enough to convince the physically imposing – but rather cowardly – Carl that he should cut and run.   Dr Zellerman agrees he should go (providing him with an escort out of the city) but it’s plainly telegraphed that Zellerman has arranged for Carl to be permanently silenced.  And so he is – via a rather striking death scene (Carl, shot once, sinks slowly to the floor in a very eye-catching manner).

Our second dressing gown moment occurs when Simon, equally as well attired as Carl, agrees to meet Dr Zellerman for lunch (although you’ll be happy to learn that he changed out of his dressing gown before the meeting).  It’s a trap though – Zellerman had arranged for Simon to admit that he’d earlier indulged in a spot of burglary (unaware that several police officers were stationed outside to hear his confession).  This could have been a sticky moment, but conveniently (a touch too conveniently maybe) Simon’s American contact appears from nowhere to bail him out.

Furst creates one of the best realised Saint villains to date.  Dr Zellerman might be largely single-minded in his desire to make money, but he also exhibits a spasm of tenderness towards Lili.  But he can’t bring himself to cease his brainwashing tricks on her since he knows that if he did then he’d never see her again.  Therefore we shouldn’t feel too sorry for him.

Simon later exhibits a previously unknown talent for disguises, as he saunters into Tante Ada’s bar sporting a beard and a wicked-looking scar.  It’s enough to fool Lili, which seems to suggest that she’s either very trusting or needs to visit an optician.  Simon’s Swedish accent (imagine the Swedish Chef from The Muppet Show) is also a joy.  It seems barely credible that Simon’s disguise would fool anyone for more than a minute (why not recruit a genuine unknown to penetrate the smuggling ring, rather than Simon who’s now a familiar face?) so that’s a slight mark against the story.

Published in 1946, The Saint Sees It Through was the final full-length Saint novel (from then on, Charteris would pen either novellas or short stories).  In the novel, opium, rather than art treasures, are being smuggled whilst the location is New York instead of Hamburg.  Simon’s contact, Hamilton, is the same in both – although his presence makes more sense in the novel, since he’d also been Simon’s wartime contact (the Saint – like Charteris – had relocated to America during WW2).

Notwithstanding Simon’s rather silly disguise, this is a well-crafted episode which has something for everyone.  A first-rate guest appearance from Joseph Furst, a decent romance between Simon and Lili and some energetic last-minute fisticuffs as the Saint duffs up several members of the ungodly.  A very early credit for Ian Kennedy-Martin (later to create The Sweeney and Juliet Bravo), this is good stuff – especially the heart-breaking final scene (absent from the original novel).  Four and a half halos out of five.