Henry Gow (Anthony Newley) lives a life of stifling suburban respectability. The household consists of his nagging wife Doris (Joan Collins), his equally nagging mother-in-law Mrs Rockett (Joan Sims) and his adenoidal daughter Elsie (Prudence Olivier).  It would seem that the elder women rule the roost over the hen-pecked Henry, but initial appearances can be deceptive ….

Described by Coward as an “unpleasant comedy in two acts”, Fumed Oak provides Joan Collins with another opportunity to play very anti-glam. Starting the play with no make up and her hair in a scarf, she makes all the early running – effectively the first act is a two-hander between her and Sims.

It’s hard to know who Doris despises the most, as each member of the family receives a lashing from her caustic tongue in turn. The early conversations between Doris and her mother are incredibly inconsequential, which builds up a feeling of ever-increasing oppression. This is also helped by the way that Henry simply sits and eats his breakfast without speaking at all, seemingly resigned to having little say in the way the house is run.

The second act is where the comedy (and the unpleasantness) really begins, as we see a slightly alcoholically refreshed Henry returning home from work to drop the bombshell that he’s leaving them all for a new life abroad (complete with a small fortune he’s been secretly saving for a number of years).

But before he departs, Henry makes sure to insult them all thoroughly, which is where the cruel comedy is generated. Beginning reasonably gently (telling Doris that her hat is common) his abuse gradually starts to ramp up (when Doris counters that she’ll give him a piece of her mind, Henry responds that “it’ll have to be a small piece, Dorrie, I don’t think you can afford much”)

Several of Henry’s choicest insults (“this old bitch of a mother of yours”) are reserved for Mrs Rockett. Joan Sims reacts beautifully to these verbal volleys whilst Newley seems to be relishing every line.

Henry then rounds on Doris again, delighted to finally have the opportunity to speak his mind after years of silence.

What right have you got to nag at me and boss me? No right at all. I’m the one that pays the rent and works for you and keeps you. What do you give me in return, I’d like to know! Nothing! I sit through breakfast while you and mother wrangle. You’re too busy being snarly and bad-tempered even to say good morning. I come home tired after working all day and ten to one there isn’t even a hot dinner for me.

Coward rarely dipped his toe into the travails of suburban life. This – along with the more substantial This Happy Breed – are rare examples, and it’s intriguing to consider Fumed Oak as the dark inverse of the later play and film.

Doris, like Ethel Gibbons, lives her life by behaving as respectably as possible. Frank Gibbons responds to Ethel’s chiding and ministering with good humour, but it’s all too much for Henry who has to break free (there’s shades in this piece of the much later exploits of Reginald Perrin).

“You’re mean, you’re cold and you’re respectable”. Henry’s parting shot to Doris is a three pronged attack. I wonder which he deems to be the worst sin? Judging by the tone of the play I’d guess the latter.

The most effective drama of the series to date, Anthony Newley is top notch, but then so are the others (even Prudence Olivier, who doesn’t have a great deal to do except complain and sniffle).

Whilst some of the other plays in the cycle might come across today as rather twee period pieces, Fumed Oak still manages to be rather discomforting (and presumably was even more so back in 1935 when it was first performed). Another definite success. 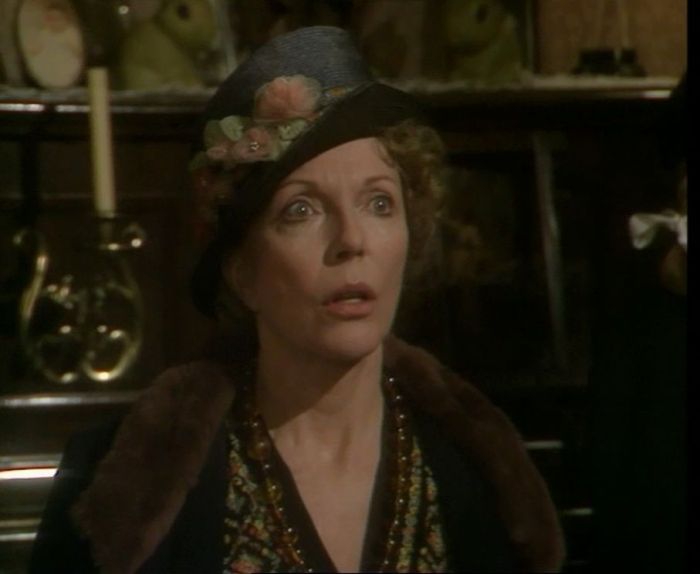 Alan Joyce (Barker) has been put on a strict diet by his wife Marion (Prunella Scales) and is told that he has to last the entire day without any food.  When she leaves he naturally heads straight off to the kitchen, but is appalled to find she’s taken every last scrap of food away.  And heading out to the shops is going to be a problem, because she’s removed all his pairs of trousers too …..

Written by Barker, under the penname of Jack Goetz, it’s not a surprise that One Man’s Meat gives him the (ahem) plum role.  Despite the heavyweight supporting cast – Scales, Sam Kelly, Glynn Edwards, Barbara New and Joan Sims – Barker is by himself for a large part of the episode’s duration.

Scales tops and tails the episode.  It’s nothing to do with the story, but Marion mentions that they’ve recently seen a blue movie at Bill and Nora’s house – this shines a light into the ways that the respectable middle-classes entertained themselves during the 1970’s.  Did they then indulge in a spot of wife swapping?  That would have made an interesting story, but possibly a post watershed one.

There’s more touchstones to the 1970’s as Alan mentions that he plans to fight the flab with Terry Wogan.  He’s too late to catch him though, so has to put up with Jimmy Young instead.  And since JY is delivering his latest recipe it’s all too much (he dunks the radio in the sink).

Although Alan attempts to order a takeaway from a Chinese restaurant (cue slanty-eyed acting from Barker, another moment which helps to date the story) he appears to be unsuccessful.  Presumably there were no other takeaways in the area?  This is something of a story weakness.

His desire for food then causes him to pretend he’s been burgled.  Two policemen (Edwards & Kelly) turn up, with Alan eyeing their trousers enviously.  It’s nice to see Sam Kelly and Glynn Edwards, even if they’ve not got a great deal to do.  I wonder if this small role led to Kelly being cast as Bunny Warren in Porridge?

The inimitable Joan Sims fairs a little better as the Joyce’s housekeeper, Mrs Dawkins.  Barker gives her some good lines which allows Sims to deadpan with her usual skill, ensuring that her scenes with Barker are the undoubted highlight of the whole thirty minutes.  Alas, she don’t appear for very long as Alan decides to steal Mrs Dawkins’ clothes, dress up as a woman and head out to the shops.  When in doubt, drag up, I guess.

One Man’s Meat has a sparkling cast and is a lovely time capsule of the seventies, but, like Alan’s stomach for most of the day, is a rather empty affair.  However if the story doesn’t appeal then you always entertain yourself by counting how many times microphone shadows appear (director Harold Snoad must have been having an off day). 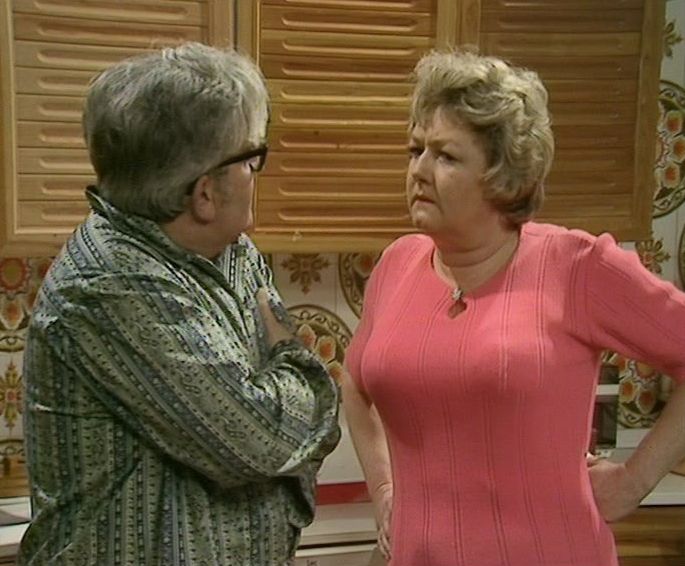 David Jason’s early career was very much intertwined with Barker’s.  Jason’s respect and admiration for Barker has never been in doubt (to him, Barker was always “the guvnor”) and it’s plain that Jason considered his work with Barker, especially during the 1970’s, as something of a comedy apprenticeship – a chance for him to watch the master at work and learn from him.

The Odd Job also sees him act without aged make-up, as he appears as Clive, a man desperate for any odd jobs (“engines you want de-clogged or television sets, I mend typewriters and washing machines you know”).  Arthur Harriman (Barker) does have a job for him – remove the scabbard from a samurai sword.  Arthur can’t take the nagging from his wife Kitty (Joan Sims) any more, so has decided to take his own life.  But when faced with the sword (plus Clive’s graphic description of hari-kari) he finds it impossible to do it himself, so wonders if Clive would do this odd job for him ….

Arthur is a meek, mild and fairly monotonous character whilst Clive (thanks to Jason’s comic tics and Northern accent) rather commands the screen.  Given that Clive is by far the showier part, it’s interesting that Barker chose to play Arthur instead.  This may be because, coming from an acting background, he didn’t have the ego that some comedians possess and wouldn’t have minded if Jason was earning more of the laughs.

Written by Bernard McKenna, who’d earlier penned several instalments of Hark at Barker and would later write several of Jason’s early sitcom efforts, A Sharp Intake of Breath and The Secret Life of Edgar Briggs, it’s a simple, but effective concept which is given a twist when Arthur and Kitty are reconciled.  This means that he no longer needs Clive’s services, but convincing the enthusiastic Clive is a little tricky.

Part two is where we see Clive really begin to treat this odd job with gusto.  He’s a man of limitless invention – for example, putting hydrochloric acid in Arthur’s milk so that his cereal disintegrates, setting up a tripwire which catches an unfortunate milkman instead, and almost managing to shoot Arthur in the park (instead some garden gnomes are dispatched).

It’s always nice to see Joan Sims, even if she has little to do, and the appearance of Derek Ware (playing the milkman) is a sure sign that something nasty is going to happen.  Ware was one of those select band of stuntmen (along with the likes of Terry Walsh and Stuart Fell) who would become so ubiquitous that their arrival on screen was a clear indication that mayhem wouldn’t be far behind.

It’s a pity that The Odd Job only exists as a black and white film print, as I’ve no doubt that the location work in the second half would look rather better in colour.  But no matter, it’s always a pleasure to see Barker and Jason together and whilst the final twist may be obvious it’s also satisfying.  It would later be revived as a 1978 film with Jason reprising his role and Graham Chapman replacing Barker.  Chapman’s involvement makes it an interesting Python curio, but The Odd Job works best in the twenty five minute format.