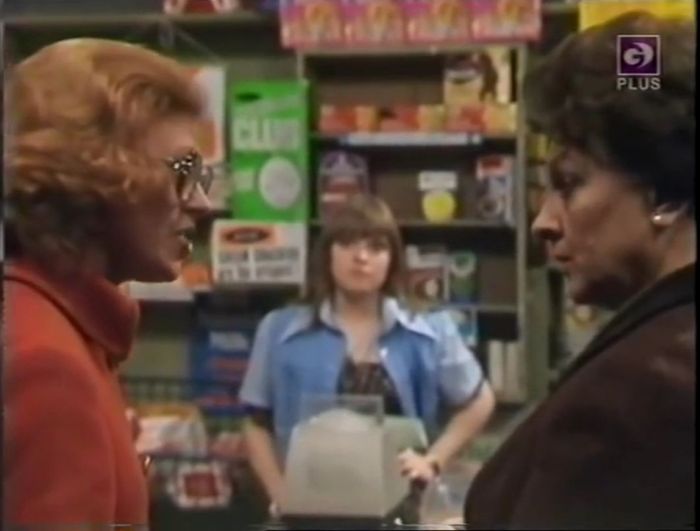 Whenever Gail and Tricia are teamed up they’re rather shrill. Having already sampled the more agreeable Suzie/Gail partnership from 1977, I have to admit they work much better (possibly because Suzie was cast in the dominant comic role whilst Gail was content to play her slightly dimwitted sidekick). Whereas Gail and Tricia are just too similar, meaning that they tend to cancel each other out.

They do have some comic appeal though – witness the early scene in the shop where both conspire by vague indifference to frustrate Len’s attempt to buy a packet of razorblades.  This scene serves as a reminder that the shop is rather going to the dogs (and is ripe for someone like Renee to take it over) but it’s fair to note that frustrated customers, kept waiting due to inconsequential gossip, is something that regularly happens in the corner shop. If a joke works then you may as well keep on repeating it.

At least the pair are no longer working together, as Gail still has her plum job at Sylvia’s Separates. But she’s fretting at the moment – as Elsie has handed in her notice. Mind you, with a spot of Machiavellian cunning on her part (telling both Mrs Matthews and Elsie some of the truth in order to get them back together and reconciled) Elsie’s soon back in harness. Hurrah!

Although whether this was because Gail missed her, felt guilty about her departure or simply didn’t fancy running things on her own is open to debate ….

Fred’s continuing to sniff around Rita. His fruitless attempts to arrange a date are played for laughs although Rita’s inability to warn him off can be taken either as kind-heartedness (not wanting to hurt his feelings) or playful spite (she enjoys stringing him along). Given the way Rita can be rather horrible to Mavis I wouldn’t say the latter possibility would be totally out of character for her.

Back to the corner shop, I like the shot of Renee and Betty facing each other (debating the possibility of Renee buying the shop) whilst an out of focus Tricia is centered in the middle of the frame. Renee’s decision will impact Tricia in more ways than one, but she’s totally powerless to intervene or affect the course of events – her position here as a passive and blurred observer makes that plain.

In this era of the programme it’s remarkable how quickly the plots move. Renee arrived for the first time last episode and today she’s setting off to the bank to obtain a loan in order to buy the shop. Speedy! Maybe this has something to do with the fact there were only two episodes a week – spread out the stories over too long a period and you run the risk of the audience losing track of their ins and outs.

This episode has two setpiece confrontations – the first is between Elsie and Hilda, two characters who have a great deal is history. Elsie’s still fuming about the way Hilda bad-mouthed her and is looking for satisfaction (at this point in the story she’s yet to get her job back). For maximum entertainment value they have their row in the Rovers, much to Mrs Walker’s distress.

Annie Walker: I’m well aware dear, Mrs Ogden would try the patience of Job himself, but I would have expected Mrs Howard to show a little more restraint. A woman of breeding does not bend to insults. She can make her point quite effectively without ever raising her voice. My Jack knew that.

Betty Turpin: I bet he did!

Wendy’s moving into Ken’s with some more of her things. The eagle-eyed Hilda spots this and judging by the faint smirk on her face you just know that it won’t be long before the news is disseminated far and wide.

Confrontation scene two closes the episode and occurs between Ken and Albert.  Albert’s not happy to hear the news that Ken’s cohabiting with a married woman, although Ken did hope that he’d at least be slightly flexible. But Uncle Albert’s never been known for his flexibility and – rather like a pocket sized avenging angel dressed in a flat cap – tells Ken that “as long as you stick wi’yer, you’ll not be seeing me. I’ve finished wi’yer”. 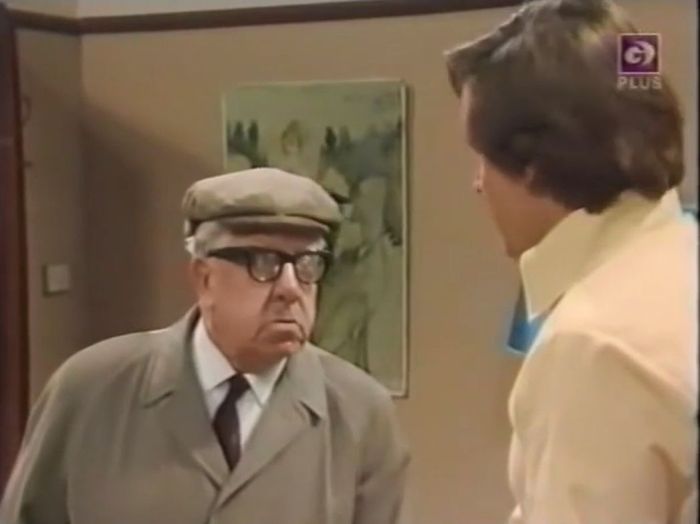