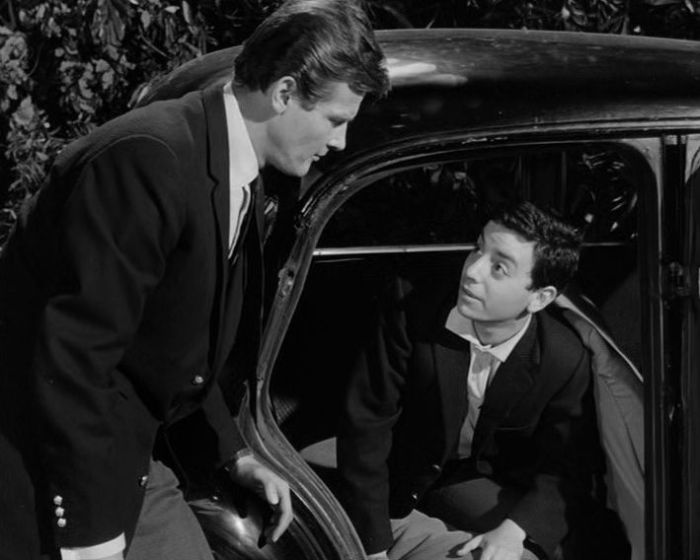 Simon Templar, international jet-setter that he is, is once again airborne – this time travelling from Rome to Geneva.  Today though he’s not sharing with a beautiful young woman, instead he’s sitting next to a stroppy teenager, Alfredo Ravenna (Joseph Cuby), who’s fretting that he’s being forced to emigrate from Rome to New York.  Both his father, Fillipo (Edward Evans), and his American step-mother Helen (Barbara Bates) attempt to reassure him, but to no avail.

Like Simon, the Revenna family are breaking their journey in Geneva and when Fillipo is knifed to death it goes without saying that Simon’s on the scene almost straight away.  Suspected by the police, the Saint can’t help but get involved …..

The Loaded Tourist begins with a piece to camera from Simon, expounding on the thoroughness of the Italian customs officers.  The fact that Fillipo and Helen are looking rather shifty immediately caches Simon’s attention, although when we later discover the very obvious place where they’d hidden the mystery package that resulted in Fillipo’s death (underneath a false bottom in Helen’s vanity case) you have to wonder if maybe the Italian customs men aren’t all they’re cracked up to be …..

Joseph Cuby registers high on the histrionics scale.  Poor Alfredo is far from chuffed at being uprooted from Rome to New York (even Simon’s reassuring words don’t help) and later tells Simon that he’s convinced his step-mother was involved in the murder of his father.  Cuby doesn’t essay a subtle performance, but it makes a nice change for the Saint to team up with a young lad rather than a young woman.

Edward Evans (probably best known as Pa Grove from The Grove Family) doesn’t have a great deal of screentime but he offers us a decent Italian accent.  ITC series of this vintage regularly call on British actors to adopt many and varied accents and it’s fair to say that some are better at this than others.  I’m sure this is something that we’ll touch upon again and again …..

Actually, speaking of that, Simon produces an Italian accent later in the story.  I’m not sure whether it’s deliberately supposed to be a little off, or if that was the best that Roger Moore could do.  Hmm.

The very recognisable John Dearth plays Inspector Codout.  He’s one of those police officers who take an instant dislike to the Saint (and the feeling is obviously mutual).  It’s a pity that Dearth only makes a fleeting appearance as more could have been made of the enmity between Simon and Codout.  Guy Deghy is rather good as the mysterious Oscar Kleinhaus, a man who appears on the murder scene just after Simon and whose precise involvement in the plot remains nebulous for a while.  The sharp-eyed might also spot Andrew Sachs in a small role as the hotel receptionist.

There’s a decent mystery element to this story.  We discover that Fillipo was carrying a stash of jewels, but since he seemed to be a law-abiding chap it’s a puzzle as to where they came from.  Production design is pretty solid – after the inevitable stock footage shots of Geneva, we see a rather nice balcony set with Lake Geneva in the background.  It certainly helps to create the illusion that we’re abroad and not stuck in the studio.

It’s an interesting touch that Alfredo’s ravings about his wicked step-mother actually turn out to be true.  She did intend to rob her husband, although murder wasn’t on her agenda.  This was the final screen role for Barbara Bates, who had previously plied her trade in a number of fairly undistinguished Hollywood movies.  Sadly, she took her own life in 1969 at the age of just forty three.

A solid yarn, The Loaded Tourist rates a respectable three and a half halos out of five.