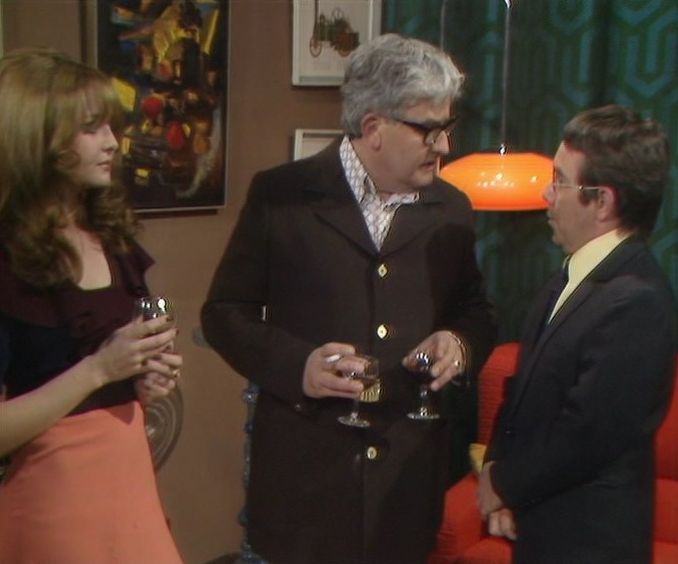 Notes: In this party sketch, Ronnie C desperately wants to find the toilet, but can’t bring himself to actually say so – instead he uses a string of subtle hints (inspect the plumbing, etc) which Ronnie B totally fails to understand. It’s not a terribly long sketch, nor does it have a particularly good punchline, but you can’t beat a bit of good, honest toilet humour.

New World, a vision in matching blue sweaters, are as relaxing as always. Tina Charles ups the tempo a little with another Laura Nyro song, Time and Love.

Now this is odd. Even this early on, the Two Ronnies had a sense of order and tradition, so it’s jarring that Ronnie C’s solo spot is so early in the show (we’re only seven minutes in) and what’s worse he’s not sitting in his chair – he’s by a piano instead! Luckily the jokes are just the same, including this one which I’m sure had more than one outing over the years. “This morning we had an argument with the children about staying up late to watch daddy. They wanted to go to bed.”

Hampton Wick once again places Madeline Smith in low cut dresses as well as offering us the chance to see Ronnie C as Toulouse Lautrec.

Next up Ronnie B plays a confused Scottish doctor (he doesn’t seem to realise he’s a doctor) whilst Ronnie C is his patient attempting to get a little treatment. When Ronnie C gives his profession as a Chartered Surveyor, it’s impossible not to wonder if one of the Pythons scripted this (Chartered Surveyors tended to loom large in Python).   That the sketch veers off in an unexpected direction also supports this, as that’s a very Pythonesque trademark.

Chaz Chase, born in Russia in 1901, made a career out of eating practically anything – cigarettes, flowers – and he does so here as well. Definitely one of the odder spesh acts we’ve seen so far, but I’m rather glad we have it.

The closing musical number is something that’s archetypical Two Ronnies fare. Ronnie B is the Rev Spooner who has endless trouble with words. Here he is attempting to give his wife (Josephiner Tewson) a present.  “I knew you needed a scentle of bot. A sottle of bent. Perfume”. Ronnie C gets in on the act. “The manner of your speaking, it ounds it a little sod.” And so on and on.

There’s several ways to date the episodes. If you don’t want to do it by the suits the Rons wear, then you can always do so by observing which big-breasted celebrity is the butt (as it were) of many of the news items. Here it’s Raquel Welch, so it’s plainly early days. She’s been signed to play Quasimodo “in the new film entitled The Hunchfront of Notre Dame.”

One thought on “The Two Ronnies – Series One, Show Five”