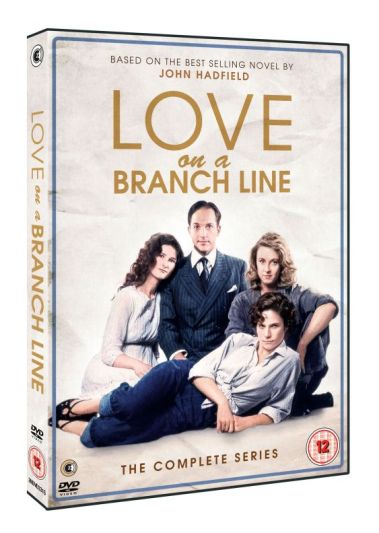 The year is 1957 and civil servant Jasper Pye (Michael Maloney) is stuck in a rut.  When his girlfriend mentions to a fellow party guest that he’s something of a bore, Jasper decides to take immediate action.  But his initial plan – to move to France and become a painter – is shelved after his superiors send him deep into the English countryside.

Since 1940, a small outpost of the Ministry of Information (Output Statistics) has been in residence at Arcady Hall.  Jasper is sent with the express mission of discovering a reason to close it down, but he finds himself constantly distracted.

The delightfully eccentric Lord Flamborough (Leslie Phillips), owner of Arcady Hall, is happy with the status quo – especially since the upkeep of his house depends on the subsidies he receives from a benevolent government.   Lady Flamborough (Maria Aitken) intrigues Jasper, but it’s Flamborough’s three daughters – Belinda (Abigail Cruttenden), Chloe (Cathryn Harrison) and Matilda (Charlotte Williams) – who all manage to bewitch him at different times …..

Based on John Hadfield’s 1957 novel, Love on a Branch Line is a serial which simply oozes class.  Adapted by David Nobbs (The Fall and Rise of Reginald Perrin) it has the sort of cast to die for.  Leslie Phillips looks to be enjoying himself enormously as Lord Flamborough, an idiosyncratic aristrocrat who, along with his wife, lives on a train at the defunct local station. He bought the station, track and train and he now indulges himself by travelling backwards and forwards.  That he never actually goes anywhere might be a not-so-subtle metaphor.

There’s no doubt that the serial’s appeal rests with the quintessentially English atmosphere it generates even if, as with the best examples of the genre (such as PG Wodehouse), events are clearly taking place in an idealised and stylised England that never was.  Therefore steam trains, cricket matches and village fetes are all very much to the fore.

When Jasper arrives he suspects that the team at the Statistics outpost, having been left to their own devices for so long, might be somewhat behind with their work.  Both the statistician Professor Pollux (Graham Crowden) and the data collector Quirk (Stephen Moore) have found numerous distractions over the years – Pollux has been researching the history of Arcady whilst cricket is Quirk’s passion.  Luckily for both of them, they have the efficient Miss Mounsey (Amanda Root) on hand to keep them in some sort of order.  Crowden and Moore are great value with Crowden (arch scene-stealer that he was) never failing to entertain every time he sidles onto screen.

Belinda (“the wicked one”) is the first of Lord Flamborough’s daughters encountered by Jasper. Within a few minutes she’s already kissed him, although this unexpected moment of pleasure is short-lived after Lady Flamborough interrupts them. As so often throughout the serial Michael Maloney’s comic timing is spot on (he delightfully leaps back in horror after Lady Flamborough calls out).

Matilda, the youngest daughter, is neatly summed up by her mother. “Funny girl. She spends all her time reading old-fashioned thrillers and wating to be seduced by a sinister monk. She’ll grow out of it”. Chole, the eldest, is plainly the apple of her father’s eye (“she’s a damn good engine driver”).  A later encounter at the pub with the drunken Lionel Virley (David Haig), husband to Chole, puts another piece of the jigsaw in place. Also there is railway enthusiast Mr Jones (the always entertaining Joe Melia).

Jasper quickly becomes a part of the local cricket team and is also drafted onto the local fete’s organising committee. That the fete is in aid of fallen women is something which has endless comic potential. Lord Flamborough declines to be chairman.  “I never could be trusted with fallen women”.  This line is delivered in the trademark Leslie Philips style.

By the end of the first episode Jasper’s been kissed by all three daughters and is somewhat perplexed by his experiences. He continues to ping between them like a pinball as the rest of the serial plays out.

A lovely comic moment occurs in episode two after Belinda decides that Jasper’s proposed painting of the Hall doesn’t sound terribly interesting. Surely he’d much prefer to paint her in the nude? Belinda’s very keen and Jasper doesn’t take too much persuading either (although he valiantly attempts to keep his mind on his art). Although he does wonder if they should ask Lady Flamborough’s permission so Belinda, stripped to the waist, casually leans out of the window and shouts down to her!

Further complications ensue when Pollux turns up with Miss Tidy (Gillian Rayne). Pollux is giving her a guided tour of the Hall and his desire to show her every nook and cranny means that Belinda is forced to beat a hasty retreat. The vision of a fully-frontal nude Abigail Cruttenden, albiet in long shot, was a slight surprise (I wonder what the original Sunday evening audience made of it?)

The sight of a desperate Jasper – convinced that Lord Flamborough knows about his dalliances with his daughters – dancing the Charleston whilst his Lordship tunelessly bashes away on the drums is another stand-out scene. Maloney cuts some impressive moves whilst Phillips is his usual louche self.

The big cricket match occurs in the third episode. Unfortunately, Jasper and Lionel are locked in one of Arcady’s wine cellars with only several thousand bottles for company. Few actors can resist a spot of drunk acting and Michael Maloney and David Haig are certainly no exception as Jasper and Lionel take solace in some of the more obscure vintages.  Carrot whisky anyone?

Things look grim for the village since their two best batsman have failed to appear but – improbable as it may sound – Jasper and Lionel do eventually stagger up to the crease. But will they be able to save the day? The cricket match is another entertaining setpiece sequence, as is the aftermath (everybody crowds into the pub for a hearty rendition of Yes, We Have No Bananas).

Love on a Branch Line has a delicate path to tread regarding tone.  It would be easy for Jasper to appear as little more than a letch  – after all, he’s already seduced (or been seduced by) Belinda and Chloe and when the sweetly virginal Matilda comes crashing down his bedroom chimney it seems that his cup runneth over.  Luckily, the unreal tone of the serial – and Michael Maloney’s skilful playing – ensures this is never too much of a problem.

The concluding episode promises to bring a dash of reality to the Shangri La of Arcady.  Jasper’s recommendation that the Statistical Unit be closed down forthwith doesn’t please either Lord Flamborough or Pollux and the arrival of jazz musician Ozzie Tipton (Simon Gregor) seems to turn Belinda’s head.  But Jasper – pressganged into becoming a judge at the Fallen Women fete – might just have secured his own future after he awards first prize in the prettiest ankle contest to Miss Mounsey.

In the end everything turns out fine for everybody and as the credits roll you can be assured that the sun at Arcady will always continue to shine (just as it will at Blandings Castle).

With an experienced cast of comic hands, beautiful locations and a sharp script from David Nobbs, Love on a Branch Line is a treat from start to finish.  Abigail Cruttenden, Cathryn Harrison and Charlotte Williams all catch the eye (although it’s Abigail Cruttenden that we definitely see the most of) whilst Michael Maloney, as the lucky Jasper, reels from one unlikely encounter to the next with aplomb.

Originally released on DVD by Acorn back in 2006, it’s now been brought back into print by Second Sight.  It comprises of four 50 minute episodes and whilst there are no additional features, the episodes are subtitled.

Something of a forgotten gem, this really is something that any devotee of British archive television should have in their collection.  Highly recommended.