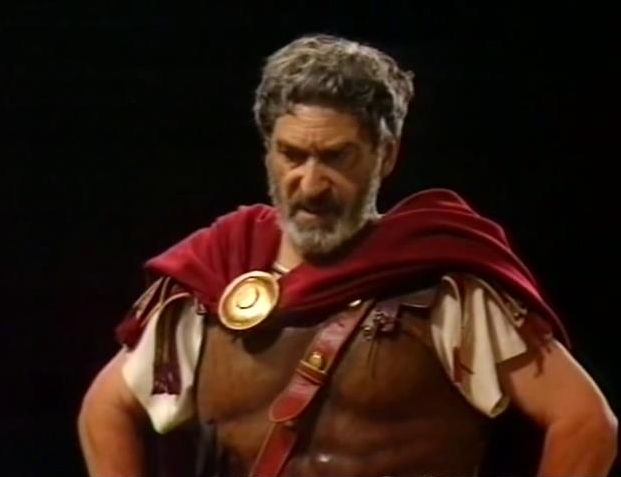 Alexander (Ian McNeice) now reigns whilst Cleopatra Berenike (Pauline Moran) is queen.  Alexander continues to enjoy drinking and dancing and seems to have very little interest in anything else.  War with Rome seems a real possibility, but Alexander has no desire to start a war he has no chance of winning.

Alexander just wants a quiet life – he knows that Rome tolerates him (regarding him as nothing more than an aimable drunkard) and by doing nothing controversial he hopes they’ll leave him alone to live his remaining years in peace.  But his unpopularity amongst both the people and the army means that civil war seems inevitable.

Familiar themes of royal musical chairs are played out in this episode.  General Chaetaes (Morris Perry) conspires with Cleopatra Berenike to depose Alexander and replace him with his younger brother Chickpea.  Alexander’s death is either another stunning example of minimalism or it’s a symptom of the series’ very small budget.  He’s supposed to be on a seashore, although it’s little more than a CSO backdrop and a few sound effects.  And it’s interesting that his death, like most of the murders throughout the series, is portrayed in an abstract way.  Given the amount of female breasts on display there was no watershed reason why they should be so coy, so it must have been another script/directorial choice (almost as if the current Cleopatra – who’s still listening to the tales of Theodotus – is editing out the grisly bits.  After all, it’s her family).

Another batch of well known faces pop up.  Morris Perry, something of an underrated actor I’ve always felt, is smoothly manipulative as Chaetaes.  Patrick Troughton has a frustratingly small role as a Roman soldier called Sextus whilst Donald Pickering and John Bennett also make appearances.  Pickering is the impossibly smooth Roman diplomat Lucullus (not a great stretch for him it must be said, since Pickering specialised in playing smooth characters) and John Bennett is very still and restrained as Philocles.  Given some of the more exuberant playing throughout the series so far, Bennett’s scenes are a model of restraint.

The death of Alexander means that Chickpea returns and he’s now an older and seemingly much more ruthless ruler.  His mistress Irene (Lois Baxter) explains why he’s changed from the younger, baffled man we saw in the last episode.  “He loves ordering people to be killed. It makes him feel like a strong man, or a king or a god. With power over life and death.”  So at heart Chickpea’s the same man, he’s just better at creating a public persona of power.  David Horovitch continues to mine some decent comic moments from the script whilst Pauline Moran (later to play Miss Lemon opposite David Suchet’s Hercule Poirot) is a characteristically manipulative Cleopatra.

Following the death of Chickpea, Rome puts his son, Alexander the younger (David Purcell), on the throne.  Purcell isn’t one of the series’ strongest actors and thankfully his reign is pretty brief.  Rape and incest are foremost on his mind as he’s upset that Cleopatra Berenike won’t sleep with him.  After he kills her in a fit of rage he’s set upon by an angry mob (there always seems to be an angry mob hanging around the palace for some reason) and his mutilated remains are very briefly glimpsed.

So that means another of Chickpea’s sons ascends the throne.  He’s known as Fluter (played by Adam Bareham) and yes, he delights in playing the flute.  Fluter demonstrates his skills to the multitude in a characteristically idiosyncratic conclusion to the episode.