The Wheeltappers hits the road today, as they visit Blackpool. We open with a lovely series of black and white stills of Colin and Bernard enjoying the various Blackpool amenities before crossing over to the Layton Institute (Affiliated) where the Wheeltappers faithful have set up for the night.

Shep’s Banjo Boys, still going strong today, keep the audience entertained with a burst of banjo favourites. I wouldn’t have minded a bit more from them, but as always the turns tend to be wheeled on and wheeled off.

Unless I’ve got him mixed up with another Dave Evans, then the young impressionist second on the bill here is the father of Lee Evans. Will Dave be giving us Tommy Cooper and Frank Spencer (as all 1970’s impressionists had to do?). He starts off with a pretty decent Eric Morecambe before moving onto Groucho Marx (you can’t beat the classics). That he’s got a slightly different list of victims from many of his peers is demonstrated when he then takes off Acker Bilk (he may not sound too much like him, but he can handle a clarinet quite well). So no Frank Spencer and Tommy Cooper then, but a more than decent spot.

This year – 1974 – Stephanie De Sykes hit number two with the song Born With A Smile On Your Face (penned by Simon May). She sings it here, with vocal support from Rain (three gentleman who all wear shirts with very wide collars). Very nice performance too, although not for the first time it’s an irritation that a good song is faded out (here because it’s time for the adverts). Unusually, De Sykes and Rain continue after the break (once again though, we don’t get the full song as this one is faded up). Rain take more of a prominent role on Golden Day, the theme song to The Golden Shot (written by Lyndsey de Paul and Barry Blue).

Bernard cajoles Colin up onto the stage. The first part of his act is basically what he does throughout all the other shows – reading out messages and resolutions from the committee – the difference here that he’s standing up on the stage rather than sitting down and ringing his bell. Instead, Bernard’s the one sitting down and enjoying himself enormously by lobbing several well-timed heckles Colin’s way! But Colin then does something different, singing With My Little Stick of Blackpool Rock. Crompton does a very fair impression of George Formby, it has to be said.

Malcolm Roberts had three hit singles in the late sixties, although like so many who appeared on the Wheeltappers he found chart success harder to come by in the seventies and beyond. Today he performs She (which was his current single). From such a brief appearance it’s hard to get too much of an impression of him, but it seems that he carved out a decent living in clubland and also went on to have a few Eurovision adventures. This website will enable the curious to dig a little deeper.

Johnny Hackett notched up a series of appearances on various series during the 1960’s and 1970’s (including The Good Old Days, Dee Time and David Nixon’s Magic Box). Mixing comedy and music, he’s a convivial type – not exactly my thing, but he’s amiable enough.

The Kaye Sisters (who weren’t actually sisters, what a swizz!) had several hits during the late fifties and early sixties. Their spot is quite jolly, although since they’re the headliners it does seem a little stingy to give them less than three minutes. 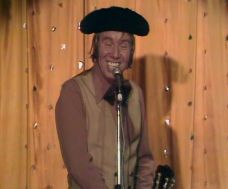