Vacationing in Miami, Simon is disappointed to learn that the skipper of the best fishing boat around – Patsy O’Kevin (Kevin McAlliney) – is fully booked up for the next few weeks.  But when Simon meets the radiant Gloria Uckrose (Shirley Eaton), the person responsible for chartering Patsy’s boat, his natural charm quickly wins him a place aboard.

Simon and Gloria have a relaxing afternoon on the waves, but when they eventually reach Bimini Dock – where Gloria’s husband, Clinton, is waiting – things turn a little sour.  This is not only due to Simon’s obvious closeness to Gloria, but also because Clinton (George Pravda) mistakenly believes that the Saint is aware of his criminal activities.  Together with his nefarious partner, Vincento Innutio (Paul Stassino), they ponder how to get Simon out of the way – eventually deciding that Gloria will be the perfect bait …..

Simon’s eye for a pretty face (and backside!) is on overdrive today.  The sight of a gorgeous bikini-clad blonde, carrying a large fish, captures his attention – although it’s plain that her ample proportions (back and front) were impressing him more than her fishy was.

But if Simon’s eyes were out on stalks when the fish-laden blonde passed by, that’s nothing to way he reacts after he meets Gloria for the first time.  You can’t really blame him though (Shirley Eaton looks stunning).  Given that 1962 was a very different moral era (especially in America – which was a prime market for this British-made programme) some people may have been slightly affronted at the way Simon deliberately attempts to romance a woman he knows is married.  It seems that the hotel staff might have shared this opinion too – I do like the shocked expression of the bartender after Simon tells Gloria that he’s hoping for an early dinner and a late night!

Their “affair” begins in a pretty chaste way – a few drinks and a dance in the hotel bar – but there’s something about the looks exchanged between Roger Moore and Shirley Eaton which makes this scene crackle with energy.  Making a quick return to the series after playing Adrienne Halberd in The Talented Husband, this is by far the better of the two roles for Eaton.  She’s striking from her very first scene – in which we observe her slowly soaping herself in the bath.  Little can be seen, but there’s a very sensual atmosphere nonetheless.

The big question must be, what did a nice young girl like Gloria see in Clinton?  Middle-aged, bad-tempered and somewhat on the dumpy side, he can hardly be said to be much of a catch (sorry, I’ll try not to use any more angling terms).  Their marriage seems to be an unhappy one – hence Gloria’s delight at spending time with Simon.  She later tells the Saint that Clinton is “dull and drab and jealous”.

She views Simon quite differently (“you’re a man”) and he reacts positively when she suggests they run away together.  But the slight face he immediately pulls suggests that he’s already a few steps ahead of her.  The revelation that Gloria isn’t the innocent and nice girl we’ve been led to believe (instead she was a willing accomplice in Clinton and Vincento’s scheme to lure Simon away from Bimini) is a decent twist – although by this point most people probably would have picked up on the fact that Gloria seemed just a little too perfect to be true.

One of the interesting things about The Effete Angler is that we don’t learn until pretty late on precisely what Clinton, Gloria and Vincento are up to.  Not that the precise nature of their villainy really matters, as it’s simply the Macguffin which ensured that Simon and Gloria were thrown together.

George Pravda, always such a watchable actor, is on good form as Clinton.  Popping tranquilisers like they were smarties, as the story wears on he cuts an increasingly forlorn figure.  His initial menacing persona therefore gets stripped away to reveal a much less impressive man – one who’s easily dominated by his wife.  The first of five Saint appearances for Paul Stassino, Vincento appears to be the muscle of the organisation – he later creeps into Simon’s room to shoot what he believes to be the sleeping Saint.  This may be an unconscious nod to a similar scene from the first James Bond film, Doctor No, but it’s no surprise to see that Simon has a brief tussle with Vincento (knocking him out) whilst Bond shoots his assailant in cold blood.  As touched upon before, this era of television was very restricted in terms of depicting sex and violence

It’s hard not to be smitten by the charms of Shirley Eaton and the character of Gloria – who switches from lovable innocent to hard-faced moll across the course of the episode – is one of the reasons why this one’s so very enjoyable.  Four and a half halos out of five. 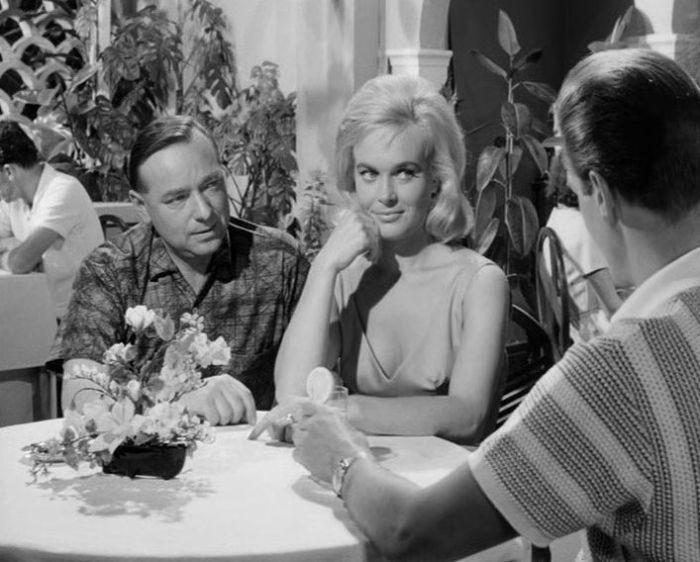