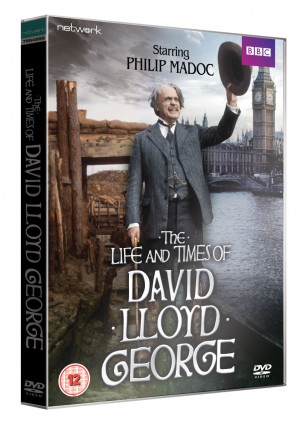 This is another very welcome BBC Network title – due for release in early October.

Philip Madoc gives a career-best performance as one of Britain’s most revered, inspiring – and controversial – leaders in this celebrated BBC series. Scripted by BAFTA-winning Elaine Morgan with input from leading historian A.J.P. Taylor – and with famously haunting theme music by Ennio Morricone – The Life and Times of David Lloyd George paints a multifaceted portrait of a political icon who steered Britain through the First World War and its aftermath, and whose pioneering reforms laid the foundations of the welfare state.

Brought up in a remote Welsh village, on his way to the top Lloyd George inspires both hysterical adoration and an enmity bordering on bloodlust. A passionate social reformer, his struggle to lift the spectres of poverty and the workhouse provokes the ire of the political establishment, while his indefatigable womanising fills many a gossip column; his political dexterity as the Liberal prime minister of a wartime coalition government, however, raised him to a new level of power and influence.