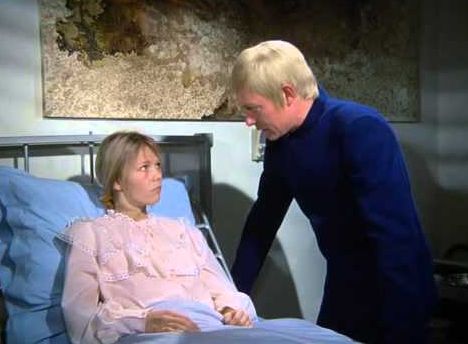 The Long Sleep is an oddity amongst UFO stories – as it’s able to be dated quite specifically.  We’re told that ten years have elapsed since Straker accidentally knocked down Catherine (Tessa Wyatt) and that it happened in 1974.  So the present day events occur in 1984.

After Catherine was hit by Straker’s car, she’s remained in a coma, until now.  Just before she lost consciousness she mentioned flying saucers, so her case-file is reactivated now that she’s woken up.  Straker feels a sense of responsibility, even though there was no way he could have avoided the collision, so he visits her in hospital to hear her story.

Ten years ago, Catherine had run away from home and met up with Tim (Christian Roberts).  The two of them then hitched a lift into the country and found a place to sleep – a deserted farmhouse.  Tim offered Catherine a couple of pills, promising her that they weren’t addictive.  But what occurred was a trip that was certainly bad for both of them.

One of the most striking things about the flashback scenes is that up until they take the drugs, all of the action set in 1974 is sepia toned.  Once they’re under the influence, there’s a sudden explosion of colour and everything slows down slightly – which effectively indicates the effects of the trip.  Things take a turn for the worse when they discover two aliens in the farmhouse’s basement, doing something with a strange object.  In their altered state, Catherine and Tim don’t realise the danger they’re in and they take part of the alien’s device.  Still under the influence of the drugs, Tim jumps off the roof and is apparently dead, whilst the aliens attack Catherine.

When she wakes up, the picture has turned back to sepia, indicating that the trip is over.  Dazed and confused, she sees the aliens drag Tim away and she staggers out of the farmhouse.  After an encounter with a truck driver who clearly had unhonourable intentions, she runs away from him and is mown down by Straker’s car.

Her story of the alien’s device is enough to convince Straker that it was a bomb.  This is a little bit of a leap, it has to be said.  Another unanswered question is why they haven’t come back to prime the bomb or replace it with another one.  What convinces Straker that it is a bomb is the time-frame – several days before Catherine’s accident there was an Earthquake in Turkey which killed 80,000 people.  Straker’s convinced that the Earthquake was caused by an alien bomb, and that there’s a similar device in England, waiting to do the same.  Again, this requires something of a leap of faith and also poses the question as to why the aliens wish to destroy large parts of the Earth, something they’ve previously never done (with the exception of Destruction).

Catherine is more than a little surprised to be visited in hospital by Tim, who, like her, doesn’t look a day older.  Quickly, it becomes obvious that he’s under the control of the aliens and he injects her with drugs in order to discover where she hid the bomb’s priming device.  This then leads to a final example of Straker’s ruthless side, when he elects to inject her with the same drug so that they can discover the hiding place and attempt to get there before Tim.  Dr Jackson warns of the dangers to Catherine, but as so often before, Straker has to weigh one life against possibly losing thousands.

Tim is caught, the bomb is dealt with, but there’s no happy ending for Catherine.  It’s perhaps fitting that the last recorded episode of UFO ends with a shot of an anguished Ed Straker.  Once again he’s protected countless people, but in order to achieve this, sacrifices have had to be made.

And that’s it – the 26th and final episode.  If you’ve never seen it, UFO is a series that has plenty to recommend it.  There’s the odd episode that doesn’t work and some do have gaping plot holes, but the main cast are excellent and the model-work (supervised by Derek Meddings) is never less than first rate.  Let’s sign off with the Power Themes 90 remix of Barry Gray’s UFO theme.