Although the third and final Pinter play from his Theatre 625 trilogy may initially seems to be on familiar ground (a mysterious individual indulging in oblique power games) The Basement quickly evolves into something much more interesting than might have been expected from the opening ten minutes.

Based on the first few scenes, the television viewer of 1967 would no doubt have expected a linear development of the opening theme. We have three central protagonists – the ebullient Law, the monosyllabic and slightly threatening Stott and the unfathomable Jane – and a well designed basement flat for them to co-exist in. With a running time of just under an hour, there seems ample scope for the three of them to clash.

And so they do, just not in the way that was probably expected. Whilst Tea Party featured some jarring cuts and fantasy sequences, these are much more pronounced in The Basement. Indeed, it’s possible to have some debate as to where reality ends and fantasy takes over (the final scene – delightfully circular in nature – floats the possibility that everything we’ve witnessed has been untrue).

The first jarring reality shift comes ten minutes in, as the action abruptly switches to a beach. Whilst Jane makes an elaborate sandcastle, the ever-voluble Law does his best to stake his claim as Stott’s true friend and soul-mate. Stott meanwhile, is somewhat distanced from this action. And then we quickly cut back to the flat – and in such a way which suggests that the whole beach scene was just Law’s fantasy.

Is it a good rule of thumb that any scene set outside the environs of the flat is fake? That could be so, but then some inside also have the same dreamlike quality. Time certainly seems to pass in a non-linear fashion (one minute there’s snow on the ground, the next moment it’s summer) whilst the décor of the flat also changes from scene to scene.

The final few scenes, although flat based, are clearly fantasy (Law and Stott, each stripped to the waist, attack each other with broken bottles) although whilst the men are scrapping, Jane is shown to be working in the kitchen, which appears to anchor her – if not them – in reality. This switch between the unreal and real is fascinating.

Although The Basement was staged several times (the London production of 1970 with Donald Pleasence as Law, Barry Foster as Stott and Stephanie Beacham as Jane sounds particularly intriguing) the strength of the piece is definitely its ability to rapidly change from one reality to another. Something that was simple to achieve on television (provided you had the time and the budget) but much more difficult to achieve on stage. I’d certainly be intrigued to see a staged production of the play, but I think it probably works best as a television entity.

Critical reception was mixed, but most writers had positive things to say, even if some had to confess that they didn’t understand it all. Kenneth Eastaugh, writing in the Daily Mirror, decided that it was “a unique master course for everybody who ever aspired to write” although this was qualified by some criticism of Pinter’s performance whilst he felt that Markham was merely “adequate” in her role.

J.D.S. Halworth in The Stage and Television Today also found some fault with Pinter’s Stott, although he/she was much more positive about Markham (both critics agreed that Derek Godfrey indulged in some skilful playing).

Max Wilkinson in the Coventry Herald declared that although “I am not certain what the play was about or what it was saying … I will confidently assert it was masterly”.

The Basement might be on familiar Pinter ground (unsettling and oblique) but it’s enlivened by some humorous moments. His final original work for television, it’s yet another which has aged rather well. 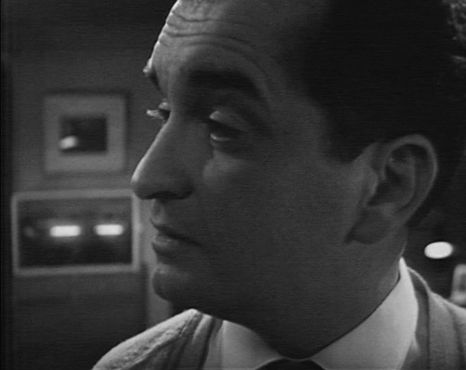 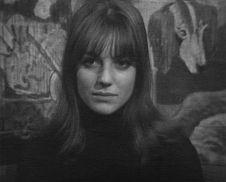 Albert Stokes (Tony Selby), a shy young man, lives with his emotionally suffocating widowed mother (Anna Wing). His big night out – a works party – turns sour after he’s falsely accused of groping one of his female colleagues. After this bad start, his night just get worse and worse ….

A Night Out was Harold Pinter’s first substantial success. It debuted on the BBC Third Programme in March 1960 before transferring to television a month later as part of ABC’s Armchair Theatre strand. This version, starring Tom Bell, Madge Ryan and Pinter himself, can be seen on volume three of Network’s Armchair Theatre releases.

The opening scene establishes the strained relationship between Albert and Mrs Stokes. She reacts with surprise to the news that he’s planning on going out, despite the fact that he’s already told her several times. Her cheerful manner doesn’t waver – even when she’s bemoaning the fact that he’ll miss their regular Friday night game of Rummy – but it’s plain that in her non-confrontational way she’s keen to prevent his departure (not revealing the location of his precious tie, for example).

Anna Wing offers a well judged performance, pitched just right. When Mrs Stokes enquires whether her son isn’t “leading an unclean life, are you? … You’re not messing about with girls tonight, are you?” it lays bare her central concern (with her husband dead, Albert is all she has left and clearly can’t bear the thought of losing him). Is it just a coincidence that these themes would be deeply mined just a few years later by Galton and Simpson in Steptoe & Son? Even down to the name Albert?

Meanwhile, Tony Selby – as the softly-spoken, down-trodden Albert – is equally impressive. Although he’s treated with contempt by some of his colleagues – such as the arrogant Gidney (Patrick Cato) – Albert also has his supporters, notably Seeley (John Castle). Seeley and Kedge (Richard Moore) form an entertaining duo, enlivening the early part of the play with their inconsequential chatter. And once both reach the party they prove to be an instant hit with the ladies – indeed, they’re everything that the awkward Albert isn’t.

Albert’s humiliation at the party sends him back home, but as he finds no succour there he heads out again, only to be picked up by a prostitute (Avril Elgar). Her lengthy, rambling monologue is deliberately wearying (it’s Albert’s misfortune to have stumbled into the company of somebody who, in their own way, is as controlling as his mother). Given this, it’s plain that their encounter won’t end well.

Although Albert has found himself unable to express his true feelings to his mother (when he finally returns home again their uneasy status quo is maintained) he can at least vent his frustrations on the unfortunate chattering prostitute. If Selby has been cast in a submissive role for most of the play, then this climatic scene allows Albert’s tightly-wound persona free reign to explode. It’s nicely played by both Selby and Elgar.

A Night Out, given the fact it was the most straightforward of the Pinter Theatre 625 trilogy, attracted the most critical acclaim. But whilst it has the most linear and comprehensible storyline of the three, like the other two it’s replete with disturbing and memorable dialogue.

Edward (Maurice Denham) and Flora’s (Hazel Hughes) idyllic countryside life is disrupted by the arrival of an elderly matchseller (Gordon Richardson). Despite never speaking a word, the old man strikes fear into the heart of Edward and awakens in Flora long-buried sexual desires ….

The first of three consecutive Theatre 625 plays by Pinter, which aired during February 1967, A Slight Ache was originally broadcast by BBC Radio in 1959 (Denham reprising his original radio role).

The oppressive nature of silence, very much a Pinter trait, is a key theme of the play. Remaining mute and pretty much insensible throughout (although there are occasional indications that he can understand at least some of what Edward and Flora are telling him) the matchseller becomes a blank canvas – enabling Edward and Flora to project their own fears, hopes and insecurities onto him.

Both direct several lengthy monologues towards him – for Edward they’re corrosive meetings, culminating in his total collapse. Denham excels throughout (and despite having to handle some very intricate dialogue rattled off at a high pace never falters). He’s matched by Hughes though, although Flora’s meetings are very different from Edward’s.

Edward rambles around a stream of disconnected topics, finding difficulty in asking any straight questions, whereas Flora is much more forthright. For example, she begins by wondering if he could previously have been a poacher (she confides in him that she was raped by a poacher as a girl). This remembrance awakens a sexual thrill in her, which is designed to be a disconcerting revelation in someone previously presented as a loyal and dutiful wife.

Prior to the arrival of the matchseller, the pair have several lengthy scenes – beginning at the breakfast table – which help to establish their relationship. A running battle with a wasp (eventually trapped by the forceful Edward in the marmalade jar) takes up a good few minutes and manages to be both amusing and oddly disturbing. At this point Edward is the dominant force, but once the matchseller appears, their roles become increasingly reversed.

Apart from the actors, Barry Newbery’s sets are an obvious star of the production (the lush garden is particularly impressive). Christopher Morahan’s direction has some nice flourishes, but with an enclosed location and only three actors it has to be fairly static at times.

Amanda Wrigley’s notes in the BFI booklet reports that contemporary critical reaction to A Slight Ache was poor. That may be, but there was the odd positive notice. Kenneth Eastaugh in the Daily Mirror commented that the play “like all Pinter’s works is for all times and for all mediums. Because it’s all about what goes on inside people – and we never change”.

W.D.A. in the Liverpool Echo was less forgiving though, finding it doubtful that anybody would have given the old matchseller such free reign (“it seemed highly questionable”).

Whilst it’s easy to sympathise with W.D.A.’s point of view, it doesn’t prevent A Slight Ache from being a tightly performed psychological drama. True it does sag a little in the middle, but it may be that future rewatches will prove to be rewarding.