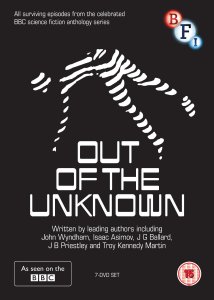 An impressive list of extras have been announced for the BFI DVD of Out Of The Unknown, due for release in October 2014. In addition to the twenty surviving episodes –

Return of the Unknown (2014, 42 mins). All-new documentary with cast and crew interviews, and clips from lost episodes.

Episode reconstructions for Beach Head, The Naked Sun, The Yellow Pill, and The Uninvited.

Fully illustrated booklet with essays by Out of the Unknown expert Mark Ward.

Out Of The Unknown was a ground-breaking BBC science fiction anthology series that ran between 1965 and 1971. OOTU adapted stories from the likes of Frederick Pohl, E.M. Forster, Isaac Asimov, Ray Bradbury and John Wyndham with an impressive roll-call of talent both in front of and behind the camera.

Acting-wise, George Cole, Wendy Craig, Graham Stark, Rachel Roberts, David Hemmings, Warren Mitchell, Hannah Gordon and Burt Kwouk were amongst the featured players whilst Ridley Scott was one of a number of designers who brought the series’ future visions to life.

Initially this was going to be a fairly bare-bones release, but the BFI were amenable to consider various proposals regarding extras.  For example, Toby Hadoke (an experienced commentary moderator on the Doctor Who DVDs) approached them on spec and the result is a series of commentaries that should be one of the highlights of the release.

This looks like it should be one of the best Archive TV releases of the year.

A brief history of OOTU is here with a full DVD review to follow in October.