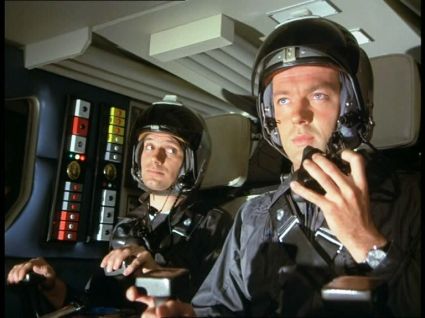 Exposed is the introductory story for Paul Foster (Michael Billington).  Foster is a test pilot who gets tangled up in a battle between Sky 1 and a UFO.  Foster remains adamant that he saw a UFO but nobody will believe him.  He keeps on digging though and eventually the trail leads to Ed Straker.

This episode allows us to see SHADO from an outsiders point of view.  Billington is good value as he tangles with various different characters on the way to his meeting with Straker.  But what he doesn’t realise is that everything has been coordinated by the SHADO boss in order to test Foster’s reactions and see if he’s a possible recruit.

If he responds in the right way then a job in SHADO will be his but it’s interesting to wonder what would happen otherwise.  There must have been other people over the years who stumbled onto the truth about UFOs and it’s hard to imagine that they’d all have been SHADO material.  Everything that we’ve seen so far seems to indicate that Straker would have no problem in silencing them for good, but luckily for Foster he makes the grade.

Also debuting is Vladek Sheybal as Dr Doug Jackson.  Jackson pops up regularly during the series and is particularly prominent in the forthcoming episode Court Martial.  There’s always something slightly unsettling about Sheybal’s performance and he contrasts well with the more straightforward members of SHADO.  With Jackson, you never quite know if he’s following a different agenda from everybody else.

Exposed gives us a chance to see the backlot at MGM Borehamwood, where the first production block was shot. The studio is the place where Straker and Foster meet for the first time and Straker has a unique way of determining whether Foster is the man for the job.  This seems to consist of pointing a wind machine at him and then pretending to shoot him at point blank range!

It’s hardly a surprise that he does get offered a post with SHADO, particularly since he’s been on the credits since the first episode, but overall this is still a decent episode.  Not outstanding, but it’s a good chance for Michael Billington to make a strong first impression.