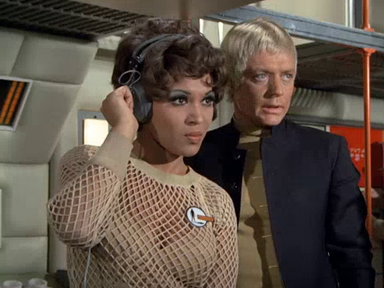 A ship is sunk in the South Atlantic and Straker believes that a UFO, operating undersea, was responsible.  He decides that capture of the UFO is a top priority and elects to lead a hand-picked crew onboard Skydiver to locate the alien craft.

It’s possible to guess the way that the episode will go pretty early on, after Straker admits that he suffers from claustrophobia.  So going aboard Skydiver probably isn’t the wisest move and it does somewhat stretch credibility that he would decide to take command himself after just one ship was attacked.  Surely the normal Skydiver crew would be just as good, if not better?

In story terms, of course, it allows Straker to be put under extreme pressure as well as allowing one of the series’ regulars (Dolores Mantez as Lt Nina Barry) a chance for a decent piece of the action for once.  Mantez had tended to play second or third fiddle on Moonbase, although she does feature more in the later stories, as Gabrielle Drake wasn’t available for the final batch of episodes.

Skydiver is attacked and is unable to surface, so Sub-Smash quickly turns into a classic submarine movie.  Five people are aboard – Straker, Foster, Barry, Chin (Anthony Chinn) and Lewis (Paul Maxwell).  As Skydiver is badly damaged, it will take time for everybody to escape.  Straker elects that Lewis, Chin and Foster will use the available escape hatch one by one, whilst Barry will exit via the crash-dive tube.

Lewis makes it out, but Chin isn’t so lucky – he goes berserk and dies before making an escape attempt.  Foster is reluctant to leave Straker, but does eventually.  This leaves Straker, like the captain of the ship, alone as he awaits the rescue craft.

Barry has already left, via the crash-dive tube, but she can’t get out because it’s jammed.  This provides Mantez with some very tense scenes and she certainly makes full use of the chance to flex her acting muscles, showing fear and desperation as escape seems hopeless.  Barry makes her way back to Skydiver’s main control area and together with Straker they both wait for rescue.  We’ve already seen, in Confetti Check A-O-K, that Barry was one of SHADO’s earliest recruits, and as the two of them desperately hang on (with the oxygen rapidly decreasing) there certainly seems to be something of a spark. She says: “If it had to be anyone…. I’m glad you’re here. I mean, I’m glad…..it’s you.”

Straker barely registers her words though, as the lack of oxygen and claustrophobia really begins to hit him hard.  He starts to hallucinate and replays the death of his son, which we saw in A Question of Priorities. Like the rest of the episode, it’s a wonderfully directed sequence and leads into an interesting jump-cut as we transfer straight to Barry’s hospital bed.

Rather than show Straker and Barry being rescued, they cut directly to the wrap-up scene where everybody (except the unfortunate Chin) can swop stories about what a close run thing it was.  This is initially somewhat jarring, but in retrospect it works very well.

Sub-Smash is very much Ed Bishop’s and Dolores Mantez’s episode and they both rise to the occasion.  Easily one of the best UFO episodes.