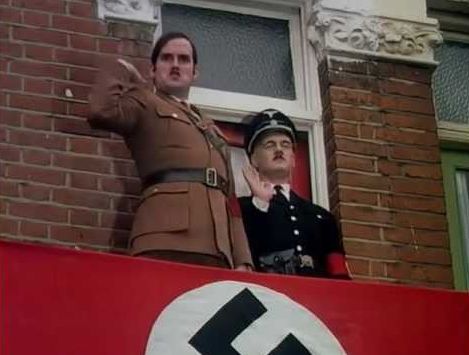 The Naked Ant opens with Idle and Cleese as two office workers who watch as their colleagues jump to their deaths.

Next up, Palin is good as a hyperactive television presenter (“Too early to tell’ … too early to say… it means the same thing. The word ‘say’ is the same as the word ‘tell’. They’re not spelt the same, but they mean the same. It’s an identical situation, we have with ‘ship’ and ‘boat’ but not the same as we have with ‘bow’ and ‘bough’, they’re spelt differently, mean different things but sound the same. But the real question remains. What is the solution, if any, to this problem? What can we do? What am I saying? Why am I sitting in this chair? Why am I on this programme? And what am I going to say next?”).

Mr Hilter and the Minehead by-election is one of my favourite Python sketches.  It opens with Idle as a monumentally boring man who, along with his wife, has arrived at a boarding house run by a nice lady (Jones).  Idle had a knack for writing long droning monologues, of which this an excellent example, as he describes in great detail exactly how they traveled down.

Johnson: Well, we usually reckon on five and a half hours and it took us six hours and fifty-three minutes, with the twenty-five minute stop at Frampton Cottrell to stretch our legs, only we had to wait half an hour to get onto the M5 at Droitwich.
Landlady: Really?
Johnson: Then there was a three mile queue just before Bridgewater on the A38. We usually come round on the B3339 just before Bridgewater, you see…
Landlady: Really?
Johnson: Yes, but this time we decided to risk it because they’re always saying they’re going to widen it there.
Landlady: Are they?
Johnson: Yes well just by the intersection, there where the A372 joins up, there’s plenty of room to widen it there, there’s only grass verges. They could get another six feet…knock down that hospital… Then we took the coast road through Williton and got all the Taunton traffic on the A358 from Crowcombe and Stogumber …

This could have made a decent little sketch on its own, but when the Johnsons enter the dining room they meet three strange characters who spin the sketch into a totally different direction.  Mr Hilter (Cleese), Ron Vibbentrop (Chapman) and Heimlich Bimmler (Palin).  All three are dressed in full Nazi regalia, which makes their attempts to hide their identities by slightly changing their names even more ludicrous.

Chapman has the least the do, Palin has a great monologue (“How do you do there squire, also I am not Minehead lad but I in Peterborough, Lincolnshire was given birth to, but stay in Peterborough Lincolnshire house all during war, owing to nasty running sores, and was unable to go in the streets play football or go to Nürnberg. I am retired vindow cleaner and pacifist, without doing war crimes“) but the bulk of the sketch rests on Cleese’s shoulders who is suitably manic as Adolf Hitler, forced to be polite to people he obviously considers to be his inferiors.

I love the concept of Hitler relaunching his quest for power via the Minehead by-election, as well as the puzzled stares of passers-by (who I assume weren’t extras and were just members of the public) as Hilter’s election campaign makes its way through the streets.

The 127th Upperclass Twit of the Year Show is another well known early Python sketch (it was re-filmed for And Now For Something Completely Different).  Cleese is a suitably hysterical commentator and he starts by introducing the runners and riders.

Vivian Smith-Smythe-Smith has an O-level in chemo-hygiene. Simon-Zinc-Trumpet-Harris, married to a very attractive table lamp. Nigel Incubator-Jones, his best friend is a tree, and in his spare time he’s a stockbroker. Gervaise Brook-Hampster is in the Guards, and his father uses him as a wastepaper basket. And finally Oliver St John-Mollusc, Harrow and the Guards, thought by many to be this year’s outstanding twit.

|n order to be crowned champion they have to complete a number of demanding tasks, such as walking in a straight line, kicking the beggar, reversing their sports car into an old woman, insulting the waiter and finally shooting themselves.

Palin is suitably grotty as Ken Shabby, who has come to ask Chapman for his lovely daughter’s hand in marriage.

Father: Mr Shabby… I just want to make sure that you’ll be able to look after daughter…
Shabby: Oh yeah, yeah. I’ll be able to look after ‘er all right sport, eh, know what I mean, eh emggh!
Father: And, er, what job do you do?
Shabby: I clean out public lavatories.
Father: Is there promotion involved?
Shabby: Oh yeah, yeah. (produces handkerchief and cleans throat horribly into it) After five years they give me a brush… eurggha eurgh … I’m sorry squire, I’ve gobbed on your carpet…

The final sketch (featuring Chapman as a politician who has fallen through the Earth’s crust and is forced to continue his broadcast whilst swinging upside down on a rope) doesn’t really engage, although Chapman is game to dangle about.  But overall this a strong show, particularly with the Minehead by-election and the Upper-Class Twits.

Next Up – Episode Thirteen – Intermission