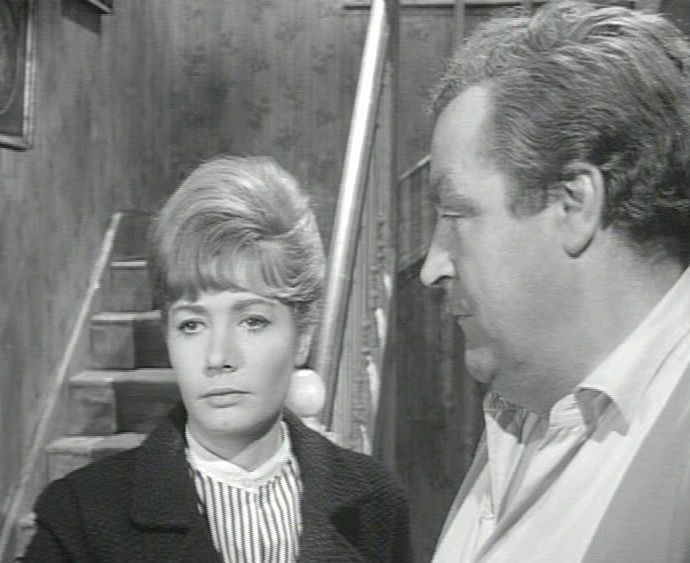 Netta and Michael Penn (Ann Bell and Richard Carpenter) are a young couple very much in love.  At present they’re forced to live in a single room but dream of owning a house of their own.  So when Michael wins seven hundred pounds on the football pools, it seems their dream will come true.

But Michael makes the mistake of mentioning his win to his landlord, Will Rikker (John Barrie).  Rikker, a violent and unpleasant man, asks Michael for a loan of one hundred pounds and when Michael refuses he attempts to steal the money anyway.  Michael discovers him and a fight breaks out – brought to a conclusion when Michael hits his head on the fireplace and is instantly killed.  Rikker’s now got the money, but he also has several problems – he has to dispose of the body, pacify his wife Liz (Megs Jenkins) who learns of his crime and deal with the suspicions of Netta, who can’t understand why her husband suddenly seems to have left her …..

John Barrie would spend a great deal of the 1960’s playing two very different policemen.  Firstly, he was the Victorian Sergeant Cork (between 1963 and 1968, although some of the later episodes had been recorded some years prior to their eventual transmission) and then he moved into the modern age to play DI/DCI Hudson in Z Cars (during 1967 and 1968).  Because of this, it’s a nice change to see him on the other side of the law for a change, and Will Rikker is a splendidly villainous creation.

From the first moment we see him it’s plain that he’s simmering over with resentment and anger.  He snaps at his wife, takes a drink (even though it’s fairly early in the morning) and threatens the Penns dog with violence.  Liz reminds him that the Penns pay them to look after the dog whilst they’re at work, but this cuts no ice with Rikker.  Leslie Norman’s direction favours close ups – especially during the aftermath of the fight – and this works very well as Rikker’s sweaty, anxious face tells its own story.  And with a large part of the episode taking place inside the house, the close-ups also help to add a degree of claustrophobia.

If we have many verbal examples of Rikker’s character, there are also non-visual clues too.  The rooms he shares with Liz are shabby in the extreme, whilst Netta and Michael’s room is spotless.  So whilst the young couple have clearly taken the trouble to ensure that their living environment is as pleasant as possible, Rikker simply doesn’t care about his.  Presumably if he’s got enough money for drink then he’s not too bothered about outward appearances (which is also reflected in his unkempt dress sense).

Richard Carpenter would later be better known as a writer, penning the likes of Catweazle, Dick Turpin and Robin of Sherwood, but during the 1960’s he pursued a successful acting career with a string of appearances in many popular series of the day.  Michael isn’t too much of a part – not really requiring a great deal from Carpenter – but even with his limited screen-time he manages to make Michael seem a likeable and decent chap, which gives his death a certain impact.

It’s Ann Bell who has to carry the second half of the episode, as she continues to puzzle over her husband’s absence.  She reports his disappearance to the police but they don’t seem too interested to begin with, not really surprising since there’s nothing to go on.

Given the sort of storyline this is, where no crime – at least initially – seems to have occurred, Gideon and the others exist very much on the periphery.  So there’s the opportunity to dwell a little on Gideon’s home life (he’s forgotten his wife’s birthday) whilst at work he berates his subordinates for errors in other cases.  None of this impacts on the main plotline, but something had to be found for him to do, otherwise it would have been a thin week for John Gregson.  Gideon does get involved later on, after Netta pleads with him to investigate the case, although Netta herself (and her dog, Skipper) are really the ones who first work out that Rikker is the guilty party.

Thanks to John Barrie’s monstrous performance and Ann Bell’s equally good counter-performance as the innocent ensnared by Rikker’s machinations, The Wall is one of the best of the series.