Skip to content
HomeOut of the Unknown (BFI DVD Review) 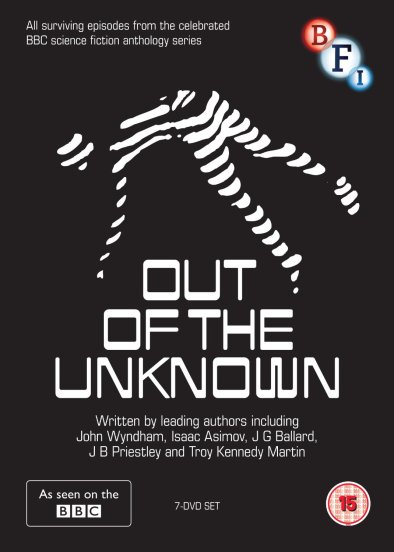 As I’ll be posting individual reviews of each episode as I move through the set during the next month or two, I’m going to take a quick look here at the content in general, the picture quality and also examine the special features.  The episodes and special features are spread across the seven discs like this –

The video was restored by Peter Crocker and the audio by Mark Ayres.  Both names will be familiar to some people via their work on the Classic Doctor Who DVD range, but the PQ on OOTU is a little more variable than the Doctor Who releases.  Crocker discusses the various reasons why this is the case in the booklet included with the DVD.  For the majority of the B&W episodes, existing tape transfers were used and then cleaned up as much as possible, although some (like Tunnel under the World) had so much damage that a full restoration was impossible.  Generally though, the picture quality is as good as could be expected.  The film sequences on some stories are out of phase (a common occurrence on material of this age) but it’s difficult to see how, given the time and budget, things could have been any better.

The menu screens are quite simple, with a static image and no music.

Apart from the audio commentaries (where the ever-cheerful Toby Hadoke teases reminiscences from both actors and technical staff) and a new 42 minute documentary, the most substantial extras are four reconstructed episodes.  Anybody who’s ever seen a Doctor Who recon will be familiar with how three of them (Beach Head, The Naked Sun and The Yellow Pill) are presented.  Available publicity photographs (along with a little CGI) have been married up to the original soundtrack to produce a pretty watchable experience.  The audios all sound pretty good (and subtitles can be switched on if there’s ever any muffled dialogue).  The audio of The Naked Sun is incomplete, so subs help to explain what’s happening during the audio-less sections.  Photographs for The Uninvited are thin on the ground, so the audio for this recon is matched up to the camera script.

Below are a number of screenshots from a variety of episodes. Although I’ve only scratched the surface of this release, it looks an impressive package, with a healthy selection of special features which help to place the original stories in context.