Although the rigidity of The Two Ronnies’ format was sometimes mocked (especially by Not The Nine O’Clock News) it’s always a surprise when a show does depart from what we expect.  The 1982 Christmas Special doesn’t have the usual introductions and farewells (so no “In a packed programme tonight” or “And it’s goodnight from me and it’s goodnight from him”).

Instead we’re pitched straight into a musical number with the Rons dressed as Chas and Dave, entertaining a pub audience with a reasonable facsimile of a typical Chas and Dave song.  It’s entertaining stuff, not only for the cut-away shots of Christmas celebrations but also for the performances of the extras in the pub (some of whom seem to have more enthusiasm than others).

Next door are Sid and George.  Sid guessed that George was in the snug as he saw everybody moving away from there (escaping from the smell of George’s feet) something which George denies.  “There’s nothing wrong with my feet. I’m on the odour eaters now”.  Sid tells him “I had them once. They weren’t half hard to swallow”.

There’s a lovely performance by David Essex of A Winter’s Tale (live and with a full orchestra accompaniment).  Ronnie B doesn’t get his usual monologue, but Ronnie C’s chair ramblings are present and correct.

The film sketch features Ronnie B as a man who travels back in time (thanks to the mysterious Ronnie C) and alters his own personal time-line, so that he was never born.  Thankfully, since it’s Christmas, all is resolved and he ends up back with his wife (Brigit Forsyth) and family, together with a new appreciation of how good his life is.

At just 45 minutes, this is quite a compact special.  Nothing particularly outstanding, but it’s all good solid Christmas fare.

Ronnie C in the chair 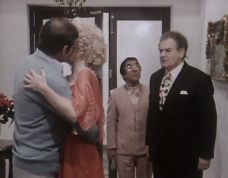 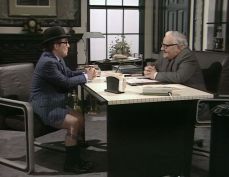 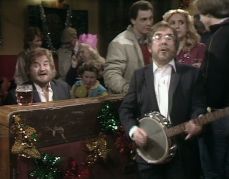 One thought on “The Two Ronnies Christmas Special 1982”