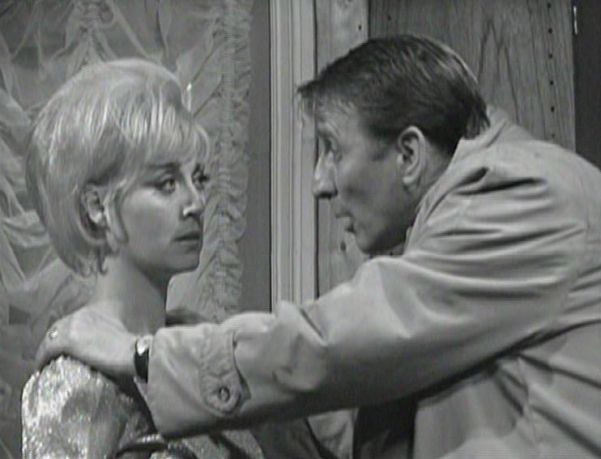 Chief Librarian Paul Ainsworth (Leon Sinden) hires Frank Marker to find out how a picture of his wife Marie (Sylvia Kay) ends up in the Library’s photographic competition.  It’s a tasteful nude portrait (taken from behind) which copies a famous painting – and has been dubbed the Bromsgrove Venus.

Ainsworth is much older than his wife and Frank puts his finger on the nub of the matter.  “You think you don’t deserve her, don’t you? She’s beautiful and French and clever and you’re just a ordinary middle-aged Englishman”.  His first port of call is John Ingleby (Timothy Carlton) who entered the photograph in the competition.  Frank has to work hard to discover the truth and come to a conclusion that will keep the Ainsworth’s marriage intact.

The Bromsgrove Venus is the last surviving ABC episode and the only story to exist from the third series. There’s plenty to enjoy here – such as Frank blackmailing Ingleby in his quest to find out who took the photo.  He knows Ingleby didn’t (he just saw it on display in a local photographic shop, recognised Ainsworth’s wife and pinched it) but he’s no compunction in engaging his unwilling assistance to help to solve the mystery.

The trail sends Frank to a box number at a newsagents where he meets his match.  All of his persuasive charm cuts no ice with the old lady behind the counter (Daphne Heard) who chases him out of the shop with her broom!  Marie is more successful with her (she gives her money) and she manages to get the address of the box number.

Marie then visits Frank with the address (she can’t bear to go herself) and explains that she’s been blackmailed for years – she pays five pounds a month to this box number.  It’s maybe the only weakness of the story that Marie would independently decide to engage Frank’s services (unaware that her husband already has).  The box number leads Frank to a dance studio where he professes a desire to brush up on his Tango skills!  And he’s not a bad mover.

Given how few episodes exist from the first three series, it’s difficult to gauge the overall quality of Public Eye’s early years – but based on the little we do have and the later Thames series, it does seem an awful pity that so much was wiped.

Series four will see Frank Marker relocate to Brighton following his release from prison.  But that’s another story.