Skip to content
HomeDoomwatch – DVD now due for release April 2016 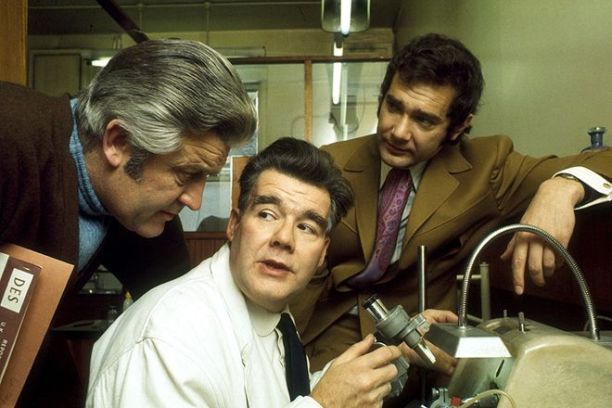 Update 27/10/15 – I’m delighted to say that Doomwatch will be released on DVD by Simply Media in April 2016.  More info here.  That happily means that this post, written when a DVD release looked unlikely, is now out of date.  I’ll leave it up though, as some of the info about the archive status of the series may be of interest to some.

As you’ll see, my thoughts were that if any company was going to take a risk on the series it would have been the BFI.  I certainly wasn’t expecting Simply to do so!  But credit to Simply for taking the plunge and I hope that the sales are healthy – if so, it might encourage them to continue digging through the BBC archives.  My DVD review can be found here.

Doomwatch has long been a series that many fans of British telefantasy, and indeed fans of British archive television in general, have wished to see released on DVD.  But it remains unreleased.  Why is this so?  I thought it was worth discussing some of the possible reasons and debating whether this is likely to change in the future.

Firstly, like a great many archive BBC programmes, a major stumbling block is the BBC themselves.  BBC Worldwide (and previously 2Entertain) have tended to only release archive programmes that they expect will sell well (classic Doctor Who, comedies such as Dad’s Army, Fawlty Towers, etc).  This was highlighted a few years back when BBC America released the Douglas Wilmer Sherlock Holmes stories.  2Entertain stated that they didn’t plan to release it in the UK, as they considered it was uneconomic to do so.

BBC Worldwide’s policy is the complete opposite from a company such as Network.  Over the last decade or so, Network have released a staggering amount of titles drawn from the ITV archive.  It must be said that many of them can’t have sold in particularly large quantities (unless I’ve dramatically under-appreciated the popularly of the likes of Yus My Dear for example!).  So Network seem to be happy to make a small profit on a large number of titles, whilst BBC Worldwide appear to be interested in making a larger profit on fewer titles.

This, of course, is frustrating for those of us interested in British archive television.  One of the solutions would be for other companies to licence BBC material – and in recent years there has been a notable increase in this.  Acorn DVD (Z Cars, Dixon of Dock Green) and Simply HE (Softly Softly: Task Force) are two companies that have a growing selection of BBC DVD titles.

And after a gap of many years, the BFI have also started to release BBC titles again.  Last year they had a season of programming entitled Days of Fear and Wonder which covered not only screenings but also DVD releases such as Out of the Unknown, The Boy from Space and The Changes.  They are also planning to release the Douglas Wilmer Sherlock Holmes later this year.

Inevitably, when the BFI announced the Days of Fear and Wonder titles, it was hoped that Doomwatch would be amongst them – but sadly this was not to be.  It would have fitted in with the other programmes released, but as we’ll see, its non-appearance may be due to the amount of work required on some episodes before they could be released on DVD.  First though, let’s see exactly what remains in the archive.  Existing episodes are highlighted in bold –

Looking at the list above, the first series has a fairly decent survival rate, series two is complete whilst series three is very patchy, with only three existing episodes – although one of them (Sex and Violence) is an interesting curio since it was never transmitted.

But things start to get complicated when we look a little closer at what formats the surviving episodes exist on.  The original videotapes remain in the archives for the following episodes – The Plastic Eaters, Project Sahara, Re-Entry Forbidden, The Devil’s Sweets, The Red Sky, The Battery People, Public Enemy, Waiting for a Knighthood, Hair Trigger and Sex and Violence. So all of these stories exist in a high quality format.

The original videotapes for the other existing stories were wiped in the 1970’s, but luckily NTSC 525-line recordings were made and sold to Canada, who returned them to the BBC in the early 1980’s.  These were then converted back to PAL 625-line recordings, although by then they were already at least three generations down (i.e. the original PAL 625-line tape was convered to NTSC 525-line tape which was then converted back to PAL 625-line tape).  Each conversion would degrade the picture (motion would be blurry, for example) but whilst the picture quality wasn’t perfect, it was still pretty watchable and these copies were broadcast on UK Gold in the 1990’s.

A process called Reverse Standards Conversion (RSC) was developed several years ago and it was designed to restore something of the natural PAL videotape look to programmes like these.  All of the BBC archive holdings of converted 525 NTSC tapes were processed with RSC, but unfortunately many of the original NTSC tapes were then junked – leaving only the new, raw RSC conversions.

The RSC conversions require grading before they can be issued on DVD and this seems to be one of the major factors in preventing the release of a Doomwatch DVD.  All of the Doomwatch RSC episodes can be made ready for DVD release – but it will cost time and money.  And it appears that the amount of money required for grading is greater than the potential profit of a DVD release, so at present it seems that these stories are fated to remain in the archive.  It does seem a shame that the 525 NTSC tapes were wiped, as it would have been possible for them to be released.  They wouldn’t have looked great, but at least they would have been watchable.

The 625 PAL episodes (comprising a good selection from the first series, one episode from series two and the three existing episodes from the final series) could be released on their own though.  And there is a possibility that B&W film recordings of the stories that now only remain as raw RSC dubs are still in the archive.  Black and white copies of these episodes would be better than not having them released at all.  Of course, the best scenario is that we get a fully-restored release, along the lines of OOTU.  For that possibility, the BFI would seem to be our best hope.