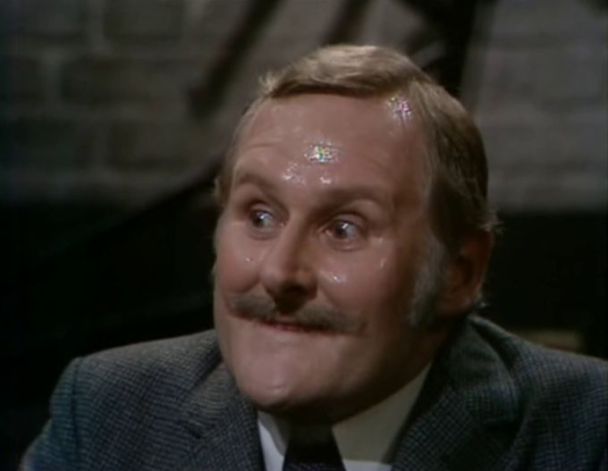 Peter Vaughan as Horace Dorrington in
The Affair of the Avalanche Bicycle & Tyre Co. Ltd by Arthur Morrison
Adapted by Julian Bond.  Directed by James Goddard

Horace Dorrington (Peter Vaughan) is a private detective who always puts his own interests first.  The information he’s gleaned about a new bicycle company should provide him with a good payday, provided he can outwit an opponent who’s just as double-dealing as he is.

Series one of The Rivals of Sherlock Holmes leant heavily on stories from Arthur Morrison.  There’s another one with Horace Dorrington to look forward to (The Case of the Mirror of Portugal) as well as three stories which Morrison wrote for his other sleuth, Martin Hewitt (Peter Barkworth).  Although not all of those adaptations actually featured Hewitt, which we’ll discuss when we get to to them.

Morrison only wrote seven stories featuring Dorrington and they were published in magazine form in 1897 and were also collected into a book the same year entitled The Dorrington Deed Box.  It can be downloaded here.

Whilst Morrison’s earlier detective, Martin Hewitt, was a fairly conventional sleuth, Horace Dorrington is a much more interesting character.  He’s unrepentantly amoral and is happy to stoop to any means necessary (be it blackmail, murder or theft) in order to achieve his ends.  Such a character gives plenty of scope for a good actor and Peter Vaughan is perfect casting.  Vaughan is a master of sinister charm (for example, his brief, but career-defining appearances in Porridge) and this comes over very well here.  Dorrington is able to appear affable when it suits him, but his true nature shows through from time to time.

There’s a good example of Dorrington’s unscrupulous nature early in the story.   He’s been able to recover a series of incriminating letters stolen from the lovely Mrs Chalmers (Sheila Gish) but he sorrowfully informs her that he had to pay the blackmailer two hundred guineas to get them back.  When she tells him that she would have happily paid double for their recovery, we see a momentarily spasm of pain on his face.  Which is understandable after we learn that he stole them from the blackmailer, so he’s made a tidy profit! This is typical of Dorrington, he’s happy to do the right thing if there’s a decent profit in it for him.

Dorrington is debating whether to invest in the Avalanche bicycle company.  Bicycles are the coming thing and large profits can be made, but he wants to know more.  He cultivates the friendship of Stedman (John Carlisle) who works for a rival company, the Indestructible Bicycle company.  Stedman tells him that he wouldn’t invest in Avalanche himself, although if an Avalanche bike wins the big race on the weekend things would be different.

Gillet (Paul Angelis) is the favourite for the race and since he races for Indestructible, Stedman invites Dorrington to see him train.  As they watch, there’s a nasty crash and Gillet is carried off injured.  It clearly wasn’t an accident, so who was to blame? The boss of Indestructible, Mallows (John Stratton), offers a reward for information leading to the arrest of the perpetrator, but Dorrington has his eyes on a bigger prize.

The Affair of the Avalanche Bicycle & Tyre Co. Ltd is an enjoyable fifty minutes, mainly thanks to the slimy performance of Peter Vaughan.  Also worth watching are Kenneth Colley and Petronella Barker as his very much put-upon employees, Farrish and Miss Parrott.

Unfortunately for Dorrington, things don’t work out quite the way he’d hoped for.  But he lives to fight and scheme another day and as the episode ends we see him consoling another young woman who’s lost some incriminating letters.  He tells her not to worry, as he’s had plenty of experience in this field ….

Next Episode – The Duchess of Wiltshire’s Diamonds