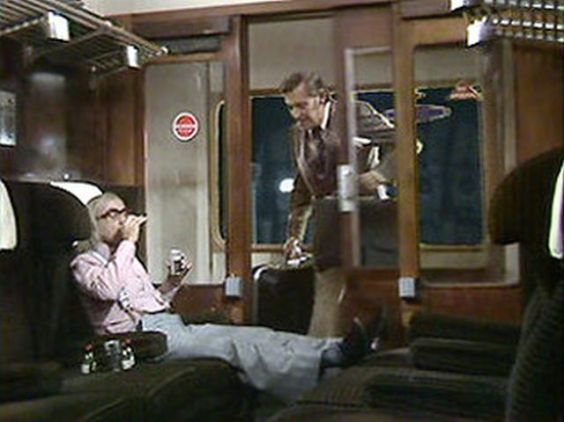 Albert Cakebread (Warren Mitchell) has had a good day at York Races.  On the train back to London, he flashes his winnings (over two thousand pounds) in the bar and offers to buy everyone a drink.  This catches the attention of one of the passengers, Basil Trenchard (Gerald Flood).

Later on, Trenchard, along with two other people (played by Alister Williamson and Robert Dorning), asks Albert if he fancies a friendly game of cards to while away the journey.  Albert agrees, as does another passenger in the carriage (a businessman played by Robin Parkinson).  In order to keep things fair, Albert asks the imposing figure of the Bishop (Lockwood West) to deal the cards.

It’s obvious that Flood and his two friends are con-men who plan to fleece the ebullient Albert out of his winnings.  Each hand reduces Albert’s money little by little, so that by the last hand he desperately stakes everything he has  The others do as well and it seems that Trenchard is going to walk away with the lot.  But amazingly, it’s the mild-mannered businessman (Parkinson) who actually has the winning hand and he scoops the whole pot.  The twist is that he, Albert and the Bishop are also a gang of con-men (who have managed to outfox the other three by being a little more subtle).

Big Deal at York City boasts an interesting performance from Warren Mitchell who affects an accent which I believe is a West Country one.  Why he didn’t use his more familiar London tones is a bit of a mystery, unless it was supposed to lull the three marks into believing him to be a country bumpkin.  His character certainly comes over as something of a simple, trusting soul (although as we see that isn’t the case at all).

Gerald Flood (bad King John, or at least something that looked like him, in the Doctor Who story The Kings Demons) is rather good as the card-sharp who spies what he thinks is an easy mark, only to be taken to the cleaners himself.  Another solid performance comes from Lockwood West as a man of the cloth who seems to gain a great deal of knowledge about poker as the game goes on!

Although Mitchell’s accent and slight overplaying is a little distracting, Big Deal at York City is an entertaining twenty-five minutes that brings the Galton and Simpson Playhouse to a close.  Although the quality of the series was a little variable, the first-rate casts in each episode do help to sometimes lift the material.  It’s not Hancock or early Steptoe standard by any means, but it’s certainly worth a look.