Skip to content
HomePublic Eye – My Life’s My Own 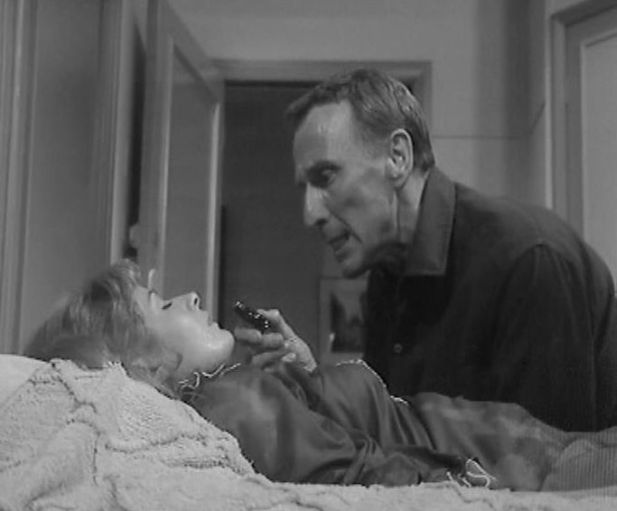 After three very Marker-centric episodes, My Life’s My Own offers a change of focus – as somebody else’s problems take centre-stage.

Early on, Frank has a meeting with his probation officer, Jim Hull (John Grieve).  There’s the possibility of another labouring job, but it’s clear that Frank’s heart isn’t really in it.  He tells Hull that eventually he’ll probably return to his old job as an enquiry agent although he admits that it’s never going to earn him a fortune.  “Often, the big chunks of money can be for something quite trivial.  I mean a couple of hundred quid for finding out who’s stealing in a factory.  What, two day’s work.  And then you can spend a week or more putting the whole world straight for somebody, for a tenner.  Because that’s all they can afford.”

The possibility of doing a great deal of work for little or no reward is also the theme of this episode.  Shirley Marlowe (Stephanie Beacham) unofficially becomes a client of Frank’s after a failed suicide attempt (although no money ever changes hands).  His motivation for attempting to help her is characteristic of him (and maybe he sees something of him in her – they both appear to be loners operating on the fringes of society).

Shirley turns up at the boarding house looking for a room.  Mrs Mortimer’s away (looking after a sick relative) and Frank’s initially reluctant to let her in.  When she tells him she simply can’t walk the streets he agrees to let her have a room.

There seems to be something odd and off-key about her, although Frank either doesn’t pick up on it or maybe he considers that it’s not his problem.  Is the fact he didn’t spot the signs of her distress a motivation for his involvement afterwards?

She’s fond of her transistor radio, which blares out the latest pop hits.  But when it’s still playing at three in the morning, Frank’s concerned – and he breaks her door down.  He finds Shirley unconscious, with a glass containing the dregs of a cocktail of drugs nearby.  Whatever else he is, he’s good in a crisis and he drags her to the bathroom, forces her to vomit and waves some smelling salts under her nose.  He also shakes her violently and slaps her hard across the face several times, which may not be in the first aid manual!

This eventually brings her around, although she’s still very groggy.  When Mrs Mortimer returns she asks Frank why he didn’t call an ambulance.  He doesn’t have a particularly good answer, merely that he thought he could cope.

But as events later seem to spiral out of control, he begins to question his judgement – maybe he decided to take charge because he’s been used to dealing with people’s problems for so long or possibly it was to spare her family the distress of the publicity and the inevitable official enquiries which would follow.

Frank takes her out and walks her up and down Brighton seafront (a nicely atmospheric sequence).  As it’s three in the morning this attracts the attention of a passing police car, but luckily they don’t stop.  When she’s more recovered, Frank’s able to tease her story out of her – and it seems to revolve around a married man called Chris.

Frank finds a letter addressed to a Dr C Nourse (Gary Watson) and goes to visit him and his wife.  Dr Nourse confirms that Shirley used to work for them, as a nurse for his wife, but she recently left.  He seems unmoved by Shirley’s suicide attempt (claiming that it wasn’t serious – if it had been then she wouldn’t have left the radio on for Frank to hear).  His wife seems much more upset, and the penny only drops as he leaves – her name is Chris, his name is Charles.

This is a fairly progressive theme for a mainstream late 1960’s drama and it’s handled subtly and well.  The episode is largely a two-hander between Alfred Burke and Stephanie Beacham, both of whom give fine performances.  Burke is his normal, excellent, self – excelling in the scene where Marker frantically tries to bring Shirley round, for example.

Roger Marshall’s script also provides a meaty role for Beacham.  It means she has to be disheveled and distinctly unglamorous for most of the story – but she’s certainly game for this and turns in an affecting performance as a vulnerable girl who’s prone to sudden changes of mood.

There’s two possible endings to this story – a happy or an unhappy one.  Either she makes another suicide attempt and succeeds or she gets on with her life.  It’s slightly surprising that her decision is taken off screen and therefore is reported second hand to Frank at the close of the story – but I suppose this allows the focus to be put back on him. And although this denies us a final scene between Burke and Beacham, it does bring My Life’s My Own to a decent conclusion.