Skip to content
HomeQuatermass II – Episode One – The Bolts

For those people, like myself, who like to tick off the elements of the Quatermass serials that were later “borrowed” for Doctor Who, episode one of Quatermass II is a very happy hunting ground.  This story clearly made a strong impression on Robert Holmes, as some fifteen years later he lifted key elements from it when scripting Jon Pertwee’s debut, Spearhead from Space.

The opening, with a radar technician tracking a mysterious object, is one such blatant lift – as is the sight of the object (a meteorite) landing in a field and its subsequent discovery by a local yokel.   The fact that the meteorite was intact before it hit the earth (an extremely rare occurrence) is also common to both series as is the notion that it was hollow.

The Bolts is an efficient opening episode as not only does it have strong continuity links to The Quatermass Experiment, it also very effectively sets up the premise of the new story.  Captain John Dillon (John Stone) was the army officer on the spot when the meteorite was tracked.  It’s not the first time that such objects have been observed and he’d like to investigate further – but there’s a complete ban on such investigations.  He surmises this is because of the flying objects scare of the previous year, which generated panic stories in the newspapers and suicides from people who feared that the end of the world was nigh.  The real reason will be uncovered later in the story ….

Dillon is curious and luckily he knows just the man to help him – Professor Quatermass.  Dillon is going out with Quatermass’ daughter, Paula (Monica Grey) so he’s able to speak to the Professor straightaway.  Monica Grey is another rather clipped, emotionless actress (similar to Isabel Dean) but Stone’s Dillon is rather more natural and he works well with Quatermass during this episode.

As for Quatermass himself, John Robinson stepped into the role at the last minute (following the sudden death of Reginald Tate).  It’s probably fair to say that Robinson wouldn’t be many people’s favourite Quatermass – as there’s something rather off-putting about his rather wooden delivery.  It’s been suggested that his rather uncomfortable performance was due to the fact he was a last minute replacement for Tate, but as he gives a similar performance in other series it seems to be just his acting style.

Although QII moves away from the concept of space exploration via rockets, as seen in the first serial, it’s still touched upon in this first episode – and this provides a strong link to TQE.  In TQE we saw the problems with the first rocket (resulting in the deaths of the three astronauts) and there’s a similarly unhappy fate for the second rocket (named Quatermass II). It exploded seconds after it was launched from its Australian base and the resulting nuclear fallout contaminated a wide area, as well as killing everybody within its immediate radius.

It’s another bitter blow for Quatermass and he confides to Paula and Dr Leo Pugh (Hugh Griffith) that this disaster spells the end for the rocket programme.  Its ultimate aim was to produce a fleet of rockets to build a colony on the Moon, but this dream is now in tatters.  “It won’t be easy, will it, to face the fact that we’re out of the race?”

Whilst the history of the space programme during the 1950’s and 1960’s tends to concentrate on America and Russia (for obvious reasons) there were times, especially during the 1950’s, when the British space programme had brief moments of life (such as the Blue Streak project).  But rising costs meant that by the late 1950’s the Blue Streak was cancelled, and QII was somewhat prescient in forecasting that lack of government funding would be the major reason why Britain never developed a credible presence in space.

With the future of his rocket looking grim, Quatermass seems only too pleased to see Dillon and be presented with a mystery.  Together they travel down to talk to the man who discovered the meteorite, Fred Large (Eric Lugg) and his wife (played by Hilda Barry).  Fred’s in a very uncommunicative state and Quatermass and Dillon beat a hasty retreat.  Although we don’t see Mr and Mrs Large again, their closing scene (with Mrs Large worriedly wondering what’s happened to her husband) is a slightly uncomfortable one, since it raises the possibility that these meteorites have the ability to change people’s personalities.

Stopping off at a local pub, Quatermass questions a local man, Robert (Hebert Lomas).  He seems to have a bee in his bonnet about “government men” and how they ruin everything – but Quatermass is intrigued by the news that a secret installation has been built nearby, at Winnerden Flats.  Admittance is strictly forbidden and there are armed guards to reinforce this.  Quatermass and Dillon nevertheless decide to take a look.  The complex (like the Quatermass II rocket earlier) is rendered with some nice modelwork by Jack Kine and Bernard Wilkie, but there’s little chance to take it all in before the pair find another meteorite.

This leads into the cliff-hanger, which is a little bodged, but still quite effective.  Quatermass looks at Dillon and reacts in horror.  “There’s something on your face!”  Unfortunately, John Stone doesn’t react at all until after Robinson has spoken, which is a bit sloppy (but it’s live television, so you can’t expect perfection).  Robinson then has to hold his expression of shock for about ten seconds whilst the first few credits roll (this was a skill that you’ll often see performed during the 1950’s and 1960’s – as actors had to stop dead whilst the credits were overlaid.  The closing credits of Police Squad! are an excellent parody of this).

John Robinson may be a bit of a cold fish, but otherwise this is a good opening episode with plenty of mystery and the promise of some further twists to come. 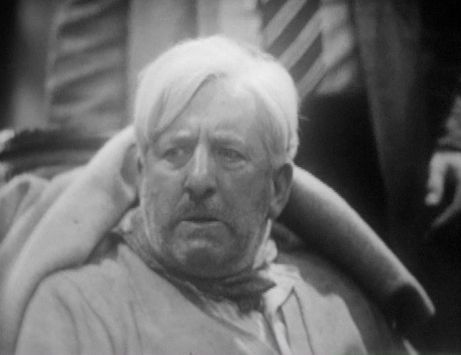 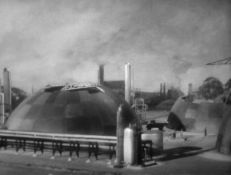 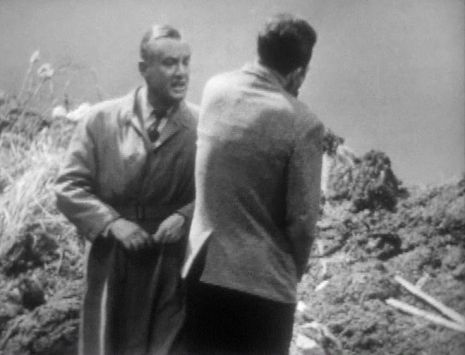 “There’s something on your face!”