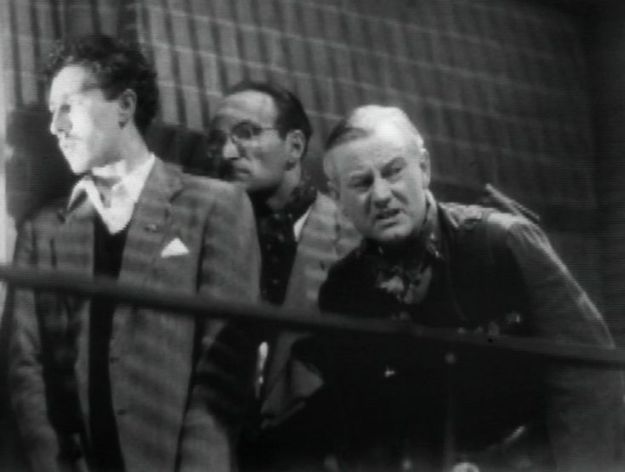 One of the impressive things about Quatermass II is that there isn’t an episode where the action sags.  Normally, with a six part serial you’d expect it to tread water during the middle, but we’ve reached episode five and it’s still ticking along nicely.  This is probably due to the variety of supporting actors that we’ve seen.  As I’ve previously touched upon, any ally of Quatermass tends to have a fairly limited life expectancy – therefore most only feature for an episode or two.

The plus side of this is that there’s a constant influx of new characters to keep the narrative moving.  And in The Frenzy, the likes of Paddy (Michael Golden), Mac (John Rae) and Ernie (Ian Wilson) take centre-stage.  In the decades to come, television drama would be taped out of sequence (which would mean that an actor could appear throughout a serial like this but record all their scenes in a few days).  But back in days of live television this obviously wasn’t possible – hence actors pop up in a few episodes and then aren’t seen again.

Paddy, Mac, Ernie and a number of others make their way down to the plant to demand answers.  The zombie-like guards aren’t able to reassure them, so a fight breaks out.  Although the film sequences for this episode are quite murky (and somewhat murkier than the other episodes) it seems pretty clear that Paddy initiates things.  He grabs a rifle from one of the guards and begins firing.  What’s particularly interesting is that when Quatermass meets up with the men later (they’ve barricaded themselves into one of the rooms in the plant) Paddy insists that the guards fired the first shot.  Quatermass agrees with him, but does he believe Paddy or is he simply happy to agree in order to keep the men on his side?  There’s several different ways the line could have been spoken, but Robinson’s delivery is rather rushed and flat – a pity, since there’s seems to be a little bit of subtext here which was never developed.

Quatermass and the others are able to cut off the gas supply to the dome.  This begins to have an effect, as witnessed by the messages relayed to them via the tannoy.  The voice offers various inducements if they come out, such as promising that nobody will be harmed and that the injured will be taken care of.  “Music while you work” is also pumped through (a sequence that Kneale remained fond of).  Whilst Quatermass is desperately attempting to find a solution, it’s a nice counterpoint to have the scene scored with the sort of easy listening music that would be played during their normal shift patterns.

Eventually, the voice makes an offer that Mac finds irrestiable.  It offers to show them any part of the plant – Mac wishes to look at the main dome.  Quatermass tries to tell him that he’s going to his death, but he doesn’t believe him.  Along with a few others, he leaves the room and shortly after it’s clear that there’s a blockage in the pipeline.  It becomes horrifyingly obvious that Mac and the other men have been shoved down the pipeline (and turned into a pulp) in order to try and stop Quatermass’ sabotage.  After this, events lose a little coherency – as Quatermass is able to escape quite easily (and he finds Dr Pugh outside, waiting for him).  They return to the rocket and debate their next move.

Throughout the later part of The Frenzy there’s a very sharp sense that the world is tightening around Quatermass and his small group of friends.  It’s difficult to trust anybody now (and Dr Pugh is acting a little oddly at the end, which implies that he’ll be the next to go rogue).  Although the plant at Winnerden Flats has been largely destroyed, there’s still several more in other parts of the world, so the danger is far from over.  The rocket appears to be their only hope – but the return of John Dillon seems to scupper that.

Dillon, under alien control, has taken possession of the rocket.  Given what I said earlier about the number of actors who only appear in an episode or two, his re-appearance here does come as something of a surprise (he hasn’t been seen since the opening moments of episode two).  With the rocket now in alien hands, everything seems lost – which sets us up nicely for the sixth and concluding episode.