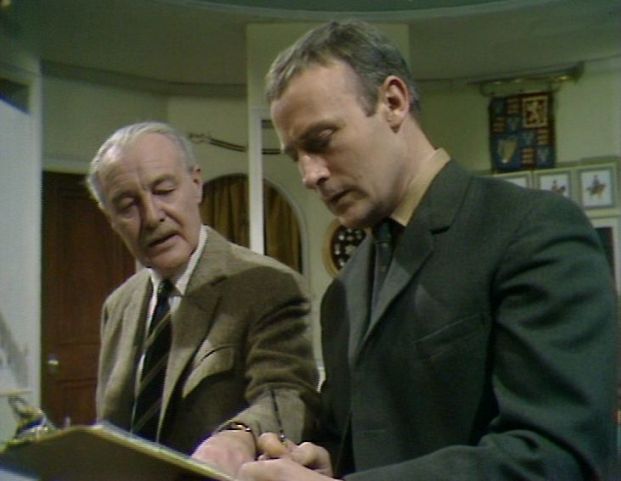 Away from the Section, David Callan has one major interest – model soldiers and fighting war-games with them.  Given that his job involves killing (and usually it’s the dirtiest and most squalid kind) it’s worth wondering if his love of re-creating famous battles from history is a yearning for the time when conflict was maybe a more honest and chivalrous pursuit.

Like the Armchair Theatre pilot, A Magnum for Schneider, Act of Kindness sees Callan tackle an opponent across the tabletop field of battle and it provides us with a very interesting clash of personalities.  Heathcote Land (Anthony Nicholls) isn’t a spy or an enemy agent – he works for a company that exports tractors worldwide (one of their biggest markets is Russia).

When Land receives incriminating photographs showing Donovan Prescott (Ray Smith) in bed with a young woman, he demands Prescott’s resignation.  Prescott refuses and tells him that since the photographs (taken on his last trip to Russia) must have been made by the KGB, he should tread very carefully.

Smith (a familiar face, thanks to his appearances as the acerbic Spikings in Dempsey and Makepeace) is very Welsh here (the odd “boyo” is thrown into the conversation).  He’s presented as a laddish man-about-town, but he also appears to have a patriotic side (since he did some unspecified low-level work for British Intelligence).  It’s this connection that makes Hunter keen that Land shouldn’t make the photographs public and so Callan is tasked to stop him by whatever means necessary.

Since Land also has an interest in model soldiers and war-games (or “toy soldiers” as Hunter dismissively calls them, much to Callan’s irritation) Callan is the obvious choice to tackle him.  “You really are a bastard aren’t you?” he says, less than happy that the one pastime he has which is separate from the Section has now been compromised.  After Callan leaves the office, Hunter confides to Cross that whenever Callan is angry, he remembers what happened to his predecessor ….

There’s one very clumsy piece of plotting in the story. This occurs just after Callan has introduced himself to Land and the pair of them begin to chat about model soldiers and battles.  For some reason, Callan is using the alias of Tucker (which is odd, since we learn in Where Else Could I Go? that Callan isn’t his real name anyway).  As Callan and Land start fighting a practice battle at the model soldier convention, Lonely passes by and refers to him as Mr Callan.  This, of course, instantly sets alarm bells ringing for Land.  It’s a rather sledgehammer way to raise Land’s suspicions and it’s a pity that something more subtle couldn’t have been done.

Later, we see Callan and Land prepare to fight a battle in the business-man’s impressive war-room.  There are two battles going on at once (the one between the model armies and the other between Callan and Land themselves).  The pair indulge in a fair bit of verbal jousting, each of them skirting around the issues, but it becomes clear that both know exactly what the other is thinking.

Eventually, Land comes to the point and calls his opponent Callan.  But even with this acknowledgment that Callan isn’t all he says, the battle goes on.  For those who favour the more action-orientated episodes, this one might seem to be a bit slow – but the battles between Callan and Land (although they don’t involve guns) are fascinating nonetheless.

At one point in the story, Prestcott tells Callan that if he wants to blackmail Land then he’d have to create something, since he seems to lead a totally blameless life.  As the pressure increases to protect Prestcott, all possibilities are debated by Hunter, Cross and Callan.  Cross favours taking Land out of circulation (either temporarily or permanently).  But a visit by Land to a toyshop might just provide them with the leverage they need …..

Anthony Nicholls (probably best known for sporting a rather unconvincing beard as Treymayne in The Champions) gives an excellent performance as the moral and principled Heathcote Land.  He shares a fair amount of the story with Woodward and the pair spark off each other very well – their conflict is definitely the highlight of the episode.  Ray Smith is rather less convincing as his business rival, but then it wasn’t such a well-crafted part.  This was the second and last of Michael Winder’s scripts for Callan (he previously wrote the stunning series two finale Death of a Hunter).

Act of Kindness must be something of a rarity for a Callan story, since it doesn’t feature any deaths, but that doesn’t stop it from being another intriguing story – thanks to Woodward and Nicholls.