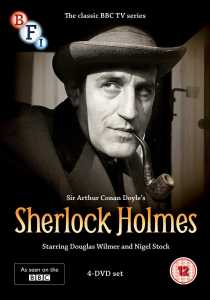 The Douglas Wilmer Sherlock Holmes series (broadcast during 1964 and 1965) wasn’t the first time that the BBC had brought the Great Detective to the screen. Alan Wheatley and Raymond Francis had starred as Holmes and Watson in a short series of six adaptations, broadcast live in 1951.

Wheatley would later call it the most difficult job of his career – the adaptations had been structured in such a way that little time was left for the actors to get from one set to the next or make costume changes. According to Wheatley, the worst example of this occured in one of C.J. Lejurne’s dramatisations when “in one particular scene she finished up with a sentence from me, and opened the next scene also with a sentence from me, in heavy disguise, with no time at all for a change!”

With no effective way for recordings to be regularly made from live broadcasts in the early 1950’s, we’ll never know exactly how good (or bad!) the 1951 series was, as no visual or audio record exists. But we’re much more fortunate with the Wilmer series – since eleven of the thirteen episodes exist in their entirety (later, we’ll discuss how the BFI have dealt with the two partly missing stories).

The stories adapted for the first series of Sherlock Holmes (a second, starring Peter Cushing as Holmes with Nigel Stock continuing as Watson was broadcast a few years later) are as follows –

The Speckled Band (18 May 1964). This was transmitted as an episode of the Detective series.

With the complete canon to cherry-pick stories from, the above list is an interesting selection. Some of the choices are no surprise, since they’re amongst the most popular of ACD’s tales (the likes of The Speckled Band, The Copper Beeches, The Red-Headed League, The Six Napoleons and The Man With the Twisted Lip) although it’s surprising that a few others (The Retired Colourman and The Disappearance of Lady Frances Carfax, for example) were chosen ahead of arguably stronger fare.

Of course, had the series continued, then maybe the ultimate aim would have been to record all of the fifty-six short stories and four novels. This is something that no British series has ever done (the Granada series with Jeremy Brett came close – but by the time Brett died, there were still more than a dozen unfilmed stories).

By the mid 1960’s, television no longer had to be transmitted live, since it was possible to pre-record. However, it was still often recorded “as live” (shot in long continuous takes with recording only pausing for serious technical problems or when it was impossible for the action to continue from one set to another without a pause).

Sherlock Holmes, like the majority of BBC drama of the period, was made largely in the studio (captured on 405-line videotape with exteriors shot on film). Since videotape was very expensive, the tapes would be routinely wiped in order to record new programmes – so virtually everything that still exists from these years does so thanks to film copies that were made (either for overseas sales or because the programme was so technically complex that it had been decided to edit and transmit it from a film dub).

Anybody who knows a little about British television of this era will be aware that the survival rates of programmes can be frustratingly inconsistent – so we’re very lucky that virtually all of the Wilmer series exists (Cushing’s BBC Holmes run is sadly much less complete).

Something else which the archive television fan will be aware of is that the existing film prints of any series tend to vary in quality – which can be for several reasons. It may be because the prints were “biked” from country to country (when a particular country had finished broadcasting it, as per agreements with BBC Enterprises they then forwarded it onto the next country in the chain) and so the print would have suffered wear-and-tear (dirt, damage, etc). Or it might be due to the telerecording process used (The Speckled Band was the only one of the Wilmer series to be recorded with the ‘suppressed field’ process – a system that produces a noticeably lower picture quality).

The upshot is that whilst watchable, previous releases (such as the Region 1 DVD) left a little to be desired on the visual front. This BFI DVD features restored versions of all episodes and does offer a good upgrade. Although it’s true to say that it could be better (it’s not up to the standards of the frame-by-frame restorations and VidFIREd black & white Doctor Who stories, for example) it’s important to understand that the budget for restoration will only stretch so far.

If you have the BFI release of Out of the Unknown, then the restoration carried out here is comparable – certainly every story now looks better than it did on the Region 1 DVD and various picture flaws that were previously very evident (a tramline scratch on a long section of The Devil’s Foot, for example) have either been fixed or made much less obvious. With more time and money the episodes could have been improved even more – but when so many programmes of this era languish unreleased in the archive (and of the few that are released, many don’t receive any restoration) the picture quality of these episodes are generally very pleasing.  Peter Crocker, of SVS Resources, should be applauded for his efforts, considering the limited time and budget he had to work with.

If the improved picture quality is one reason to upgrade, then the strong selection of special features is certainly another. Chief amongst these are the inclusion of the existing footage from the two incomplete episodes – The Abbey Grange and The Bruce-Partington Plans (which is very welcome since neither story was represented on the previous DVD releases).

The first half of The Abbey Grange no longer exists, so it’s completed with a newly shot sequence of Douglas Wilmer reading an adaptation of the story. The second half of The Bruce-Partington Plans is missing from the archives and it’s been completed with an off-air soundtrack syncronised to extracts from the camera script. Neither is a substitute for having the complete episode (and it might have been wise to cut-down Wilmer’s piece to camera for The Abbey Grange) but it’s certainly much, much better than nothing.

Like Out of the Unknown, Toby Hadoke and producer John Kelly have assembled a mouthwatering series of commentary tracks with directors Peter Sasdy and Peter Cregeen as well as actors Douglas Wilmer, David Andrews and Trevor Martin across five episodes.

Wilmer’s involvement (on two commentaries, a 22 minute interview and the first half reading of The Abbey Grange) is particularly welcome. The BFI should be applauded for including so many good supplementary features, as these help to place the original programmes in their correct historical and cultural contexts.

From Tuesday onwards, I’ll be blogging a quick review of each story (where I’ll go into more detail about the merits of both Wilmer and Stock) but suffice it to say that if you’re a fan of Sherlock Holmes or simply a fan of 1960’s British television, then this is must buy. Good picture restoration and a quality selection of bonus features help to enhance a very strong series. Hopefully sales of this will be good enough to persuade the BFI that other BBC series of the same era deserve similar treatment.

But for now, I’d strongly recommend picking up a copy of this classic series. 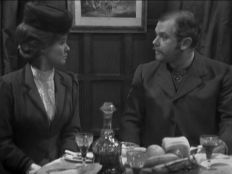 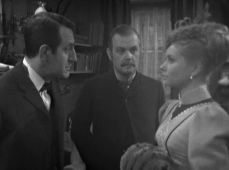 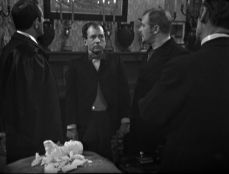 The Disappearance of Lady Francis Carfax

The Man With The Twisted Lip