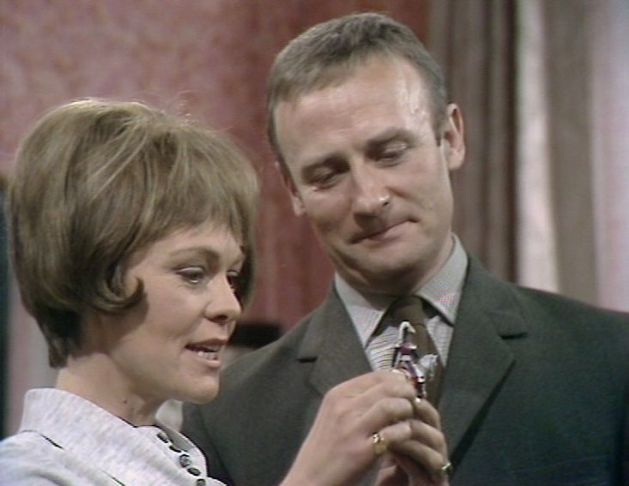 Callan’s in love.  Those familiar with the parameters of the series will be probably be able to guess that his happiness is going to be very short lived.

Lady Lewis (Zena Walker) is the widow of Sir Colin Lewis, the youngest Foreign Secretary for a century.  Whilst his death hasn’t left her penniless, her financial situation is certainly a little strained (she has two sons to put through public school. which isn’t cheap).  So when the smooth-talking documentary film maker Rene Joinville (Tony Beckley) approaches her with an offer of ten thousand pounds to appear in a programme about her husband, it seems to be the answer to her prayers.

But Hunter doesn’t want the documentary to go ahead.  Sir Colin knew too many secrets and he fears that whilst Lady Lewis won’t deliberately betray any confidences, the skillful Joinville will be able to tease them out of her.  It’s interesting that. for once, the Section doesn’t have all the facts.  Joinville is a Russian agent, but this vital piece of information isn’t discovered by them until very late on.  Had they known, of course, then things might have turned out very differently.

Hunter assigns Callan to warn Lady Lewis off.  He thinks that blackmail might be a good method, but Callan is rather more subtle than that.  He appeals to Lady Lewis’ sense of duty and also hints that the establishment would view the programme with extreme disfavour.  Woodward is delightfully bashful in this scene –  he’s slightly hesitant and occasionally stumbles over his words.  We tend to see Callan as the forceful man of action, so this is a good insight into his softer side.

There’s an instant attraction between them, sparked by Callan’s love of model soldiers.  He promises to bring one to show her at a later date and once he leaves she starts to swot up on the subject.  Given how totally different they are as characters, it’s a little difficult to believe in this sudden romance – but Woodward and Walker are both so good that they make it work.

Unfortunately for Callan, he never progresses beyond a rather chaste kiss.  Since Lady Lewis won’t take part in the documentary, Joinville is ordered to kill her.  He’s told to use a gun favoured by the Section – that way they’ll be blamed and the resulting furore will be something of a propoganda coup.

The killing is carried out and when Callan receives the news it’s possible to see the light go out of his eyes.  He instantly changes back into the cold, remorseless killer and you’re left in no doubt that he will avenge her death.  Initially Cross is a suspect, but he’s cleared and when the truth about Joinville is discovered, Hunter gives the younger man the task of bringing him in.  Callan queries whether he has to be brought in alive and Hunter is quite clear that, yes, he’s not to be killed.

Cross’ bungled attempt to apprehend Joinville is another example of just how inexperienced he is.  He gives Joinville plenty of warning by making a hash of picking the lock on his hotel-room door and then is very easily disarmed.  Luckily for him (although Cross doesn’t see it like that) Callan is outside the window and deals with Joinville.  When he’s finished, Joinville is very dead.

Suddenly – At Home was James Mitchell’s third script for series three. I’ve always had a soft spot for this one – partly because, along with Breakout, they were the first episodes of Callan that I ever owned (they were released on video in the late 1980’s).  Whilst it’s a bit of stretch to accept the instant relationship between Callan and Lady Lewis, there’s plenty of incidental pleasures.  Tony Beckley sports an outrageous French accent as Joinville.  He gives a slightly off-kilter performance, but it does work (where a more naturalistic turn might not have).  Zena Walker impresses as Lady Lewis – she plays her as calm and charming, which makes her sudden, violent death all the more shocking.

Piers Haggard’s direction is quite noteworthy, with some well chosen shots.  At the start of the story we see Joinville preparing to accept an award for one of his films – and the camera shoots through the award as he’s speaking to Lady Lewis (creating a quadruple image).  Also, when Callan first meets Lady Lewis, part of the scene is shot directly at a mirror, so that we see a reflection of the characters, before the camera pans off to focus on them.  Plus there’s a number of close-ups (which help to create a claustrophobic atmosphere, especially in the immediate aftermath of Lady Lewis’ murder) and some interesting low-angle shots (these make fairly standard sets look a little more interesting).

It’s another very solid episode in an impressively consistent series.