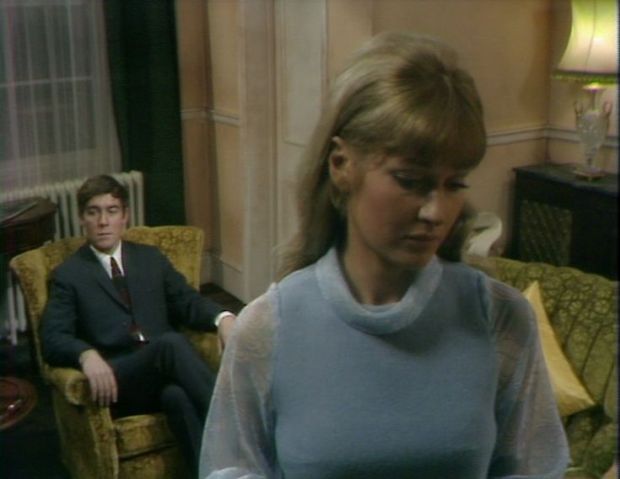 In Callan’s world, the innocent often have to suffer. They frequently find themselves used as pawns, sacrificed in a game they don’t even know they’re playing.  God Help Your Friends is a prime example of this – it also demonstrates Callan’s disdain for the work he has to do.

Hunter tells Callan and Cross that the engagement between Beth Lampton (Stephanie Beacham) and Mark Tedder (Michael Jayston) has to be stopped.  Beth works as a top-level interpreter for NATO whilst Tedder is suspected of being an agent for the opposition.  Hunter accepts that they have no definite evidence about Tedder, but the merest hint of suspicion is enough to make their union highly undesirable.

It’s not a job that Callan relishes, so he spends the episode in a very bad mood, taking every opportunity to rile Hunter and Cross.  Callan and Cross spend their time digging for dirt on Tedder and then making sure that Beth knows about it.  This isn’t a problem for Cross, who shares none of Callan’s scruples,  although he does come to believe that if they end the relationship it will be for the girl’s benefit.

At the start, we see that Beth and Tedder are very much in love.  But once a little suspicion and paranoia are introduced, even the strongest relationships can be destroyed.  Hunter is keen for them to achieve this as quickly as possible, but he’s adamant that he doesn’t want anything untoward to happen.  Callan bitterly reassures him that “there are other ways of killing people than with a bullet.”

Hunter assigns Cross to keep an eye on Beth (posing as a time and motion expert) whilst Callan roots around for incriminating evidence.  Initially, Callan assumes that Hunter will want him to romance the girl, but by assigning Cross we can assume that the intention is to infer that Callan’s getting slightly too old to play the lover ….

Beth is a nice girl – possibly too nice and innocent for the world she’s found herself in.  She’s surprised that, despite her sensitive job, her immediate superior wants to know about her engagement.  Given this, it seems clear it would never occur to her that the security services would be at all interested in her or her fiance.

Mark Tedder is a smooth, charming man (played to perfection by the always impressive Michael Jayston).  We never discover if he was actually an agent or not, but that’s not the point of the story.  In the shadowy world of the Section, there’s no judge or jury (although there’s certainly plenty of executioners).

As good as Russell Hunter always was (and Lonely has some nice moments in this one, especially in his first scene, when he’s dressed in a very smart suit, complete with umbrella!) by this point it was sometimes difficult to include him in the episodes without stretching credibility to breaking point.  During the first series (when Callan was still officially out of the Section) Lonely was a useful character, since he could obtain things (such as guns) which Callan couldn’t get any other way.

But by series three he doesn’t fulfill any function that a trained member of the Section couldn’t provide – so it’s sometimes harder to justify his presence.  For example, Callan asks him to break into Tedder’s flat and look for anything that could be used against him.  Callan then waits in the street below and only goes up to the flat once Lonely signals that he’s found something.  Lonely’s ability as a burglar is well-known, but do we really believe that Callan couldn’t have picked the very simple lock on the door or that he’d let Lonely search the flat by himself?

This does, however, give us the one moment of levity in the story – as Lonely excitedly thrusts a series of red-hot letters into Callan’s hand.  “Now the bird that wrote that, that is terrible, that is shocking, she’s got no shame. Now read that, read that.”

But the letters (referring to an old love-affair before Tedder met Beth) don’t do the trick and so Callan has to resort to other methods.  Eventually they succeed, but by the end of the episode there’s no particular cause for celebration.  The final words of the story go to Woodward and once again he delivers the goods.

God Help Your Friends was William Emms’ second and final script for Callan (he also wrote the wiped story The Running Dog for series two).  Active as a writer during the 1960’s and 1970’s he contributed to a number of popular series, such as Redcap, Public Eye, Doctor Who, Mr Rose, Ace of Wands, Z Cars and Owen M.D.

Peter Duguid would eventually direct eleven episodes for Callan, of which this was the eighth.  His direction here is unshowy and straightforward, but he manages to capture good performances from both Beacham and Jayston (who carry many of the key scenes).  Woodward is pushed more into the background, but he’s a constant, brooding presence and plays  Callan’s disgust with the job (and with the way it turned out) to perfection.