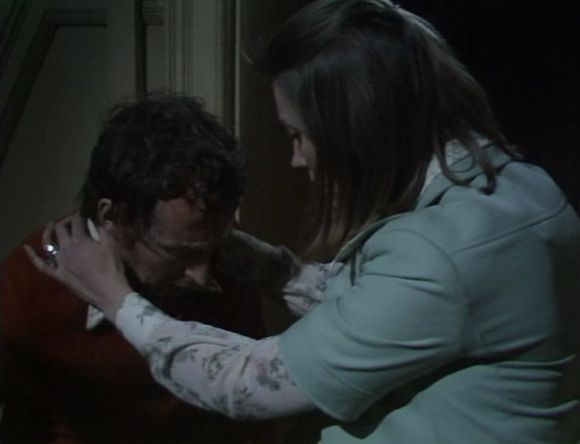 Vic’s been in a depressed state for a while and this culminates in an apparent suicide attempt (although Greg isn’t convinced – he believes that if somebody wants to shoot themselves then they don’t miss).  But if it wasn’t a genuine attempt, maybe it was a cry for help.

The crippled Vic regards himself as a useless encumbrance, but Greg has a plan which involves stressing how important it is that Vic continues to teach the children everything he knows.  If Vic feels that his teaching is of value then hopefully this will help his shattered self esteem.

But the return of the spoilt Anne threatens Vic’s sanity and stability.  Anne was the woman who left him for dead and he’s vowed his revenge ever since Greg rescued him from the quarry.  Now that fate has thrown the two of them together again, the outcome is far from certain.

Revenge was the third story in Vic’s trilogy (which began with Genesis and continued with Spoil of War).  Given that he’s the key figure in the story, the production was dealt a major blow when Terry Scully was unable to continue in the role (he suffered a nervous breakdown).  A replacement had to be found at the last minute and Hugh Walters managed a very credible job of filling the void.  Vic’s suicide attempt was written in at the start of the episode.  It was a useful device which enabled his face to be scarred and this helped to disguise the change of actor.

Survivors started shooting in the middle of winter, which was of was of benefit to the early episodes as the bleak weather suited the mood of the initial stories.  But by now the survivors are beginning to get organised and the bright sunshine we see here (and in the previous episode) are a subtle reminder of rebirth and renewal.

The opening moments are particularly nice as most of the community set off to make hay.  There’s something rather idyllic about this (although given how we’ve seen most of the characters suffer during the course of the series, you know that any happiness is going to be short lived).  But there is a twist to this apparently innocuous scene – Vic’s inability to help is the trigger which pushes him over the edge.

And the arrival of Anne, along with Donny (Robert Tayman), obviously doesn’t help.  Donny has a tanker of petrol, which the community desperately needs, but how can they offer shelter to Anne after the way she treated Vic?

Hugh Walters gives a cracking performance as Vic. Scully’s take on the episode would have been interesting to see, but Walters is a more than adequate subsistute.  It would have been easy to overdo the melodrama, but Walters is restrained and focussed, managing to express Vic’s constant anger in a very subtle way.  Myra Francis’ Anne is just as objectionable as ever.  She’s also still clearly desperate to hang on to any shred of civilisation she can – even going so far as to wear a fur coat in the middle of summer!

Their eventual meeting is the key to the episode, but it’s wisely held back until the last ten minutes or so.  It gives another chance for Walters to shine as he pours out the story of Anne’s abandonment of him to the whole community (whilst Anne sits there silently).  If he’s expecting contrition or compassion from Anne then he’s sorely mistaken.  She tells him that “I thought you were finished.  If you’d have been a horse or a dog, I’d have shot you.”

One of the problems with series one of Survivors is that a large cast of regulars were added to the second half of the run – this influx meant that many of them remained rather undeveloped.  Vic does get a chance to take centre-stage here, but afterwards he moves into the background again (and then dies off-screen in the series two opener).

Thanks to Hugh Walters and Myra Francis, Revenge is a compelling episode.  The shot of Anne walking away from the community (as the credits play) is a very effective visual way of bringing this part of Vic’s story to a conclusion.