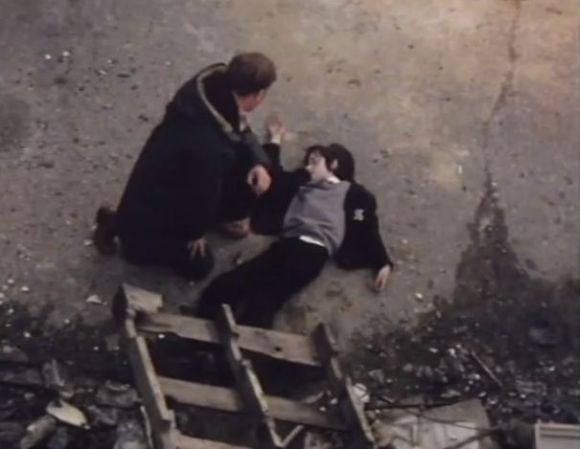 Tucker’s still very much a loose cannon. His latest trick is seeing how often he can throw his woodwork chisel into a piece of wood – which is rather dangerous to say the least. The fact that the teacher remains oblivious to this no doubt would have upset those watching at home who already found him and some of the other pupils to be less than ideal role models.

His next wheeze is to persuade Benny to explore an abandoned building which he claims is an ammo dump. Rather unexpectedly, Justin asks to join them. Tucker’s reluctant (since the incident at the swimming pool) but Benny is happy for him to come along, so Tucker eventually agrees.

The abandoned building offers plenty of scope for unusual camera angles and tension is ramped up by mysterious noises (which turn out to be a cat!) But the abandoned building isn’t quite as abandoned as it seems – two workman turn up. As the three boys attempt to escape, Justin loses his footing and falls.

At first glance, it looks as if he might be dead. But it would have been a daring move (and probably a step too far) to kill off a pupil so early in the run. Although at the time the first series was made it was far from certain that a second would go into production, so you could argue that they had nothing to lose.

But after the fall-out that occurred over the swimming pool incident, they were probably wise to ensure that Justin only suffered broken bones and concussion. We’d have to wait a little longer before the series started killing off its pupils.

Mrs Jenkins and Mrs Green are called to the school and it’s refreshing that neither find fault with the school – they both put the blame onto their children (whilst also accepting that they have to shoulder responsibilty as well). After some deliberation it’s decided that only corporal punishment will fit the bill – and this is enough to finally wipe the smile off Tucker’s face (although, brave to the end, he does insist that he can take more punishment than Benny!)