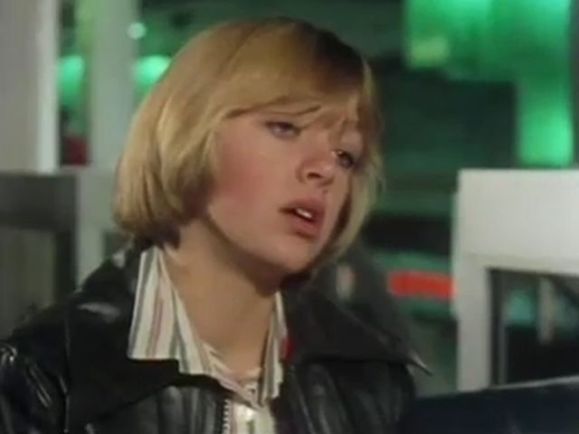 The fall-out from Miss Summers’ resignation is still rumbling on. The staff, led by Mr Baxter, go on strike – which means that the children get an unexpected day off. This gives Mr Garfield a nice line where he bemoans that “nobody thinks about me. I never had this trouble with Mr Starling.” Most of Graham Ashley’s dialogue is matter-of-fact (he was never given the same comic material that, say, Timothy Bateson would later enjoy) so his deadpan delivery here is all the more memorable for its rarity.

Cathy and Madelin decide to go out somewhere. Cathy does offer Trisha an olive branch by asking if she wants to join them, but Trisha’s not interested. Madelin’s later comment that Trisha is a “stuck up bitch” is a little jarring – it’s a mild enough profanity (and pretty much every real school-child would have used far worse) but it’s still a surprise to hear it uttered in a BBC children’s series.

The pair head for the local shopping precinct. This is a lovely slice of late 1970’s Britain, complete with piped music, and we’ll see it again in series three (during the episode where Antoni Karamanopolis dies). Madelin decides that a bit of shop-lifting will pass the time and Cathy reluctantly agrees.

The first things that Madelin steals are a couple of apples (Cathy puts hers in the bin, which is a telling moment). They then take some empty record sleeves, to put on their bedroom walls. After this, it’s time for the big one – as they steal some clothes from the Clockwork Orange boutique (I wonder if this was a real shop or if the name was scripted? I hope it’s the former!)

As might be expected, they don’t get away with it – although if they had left when Cathy suggested, they might have done – for some reason Madelin decided to hang about, giving the shop assistants time to check that some of their stock was missing. A chase ensues and eventually the pair are cornered – but not before the sneaky Madelin has put the stolen top into Cathy’s bag and blamed her for the crime.

Many of the topics we see in the early series of Grange Hill will be done again in later years (some several times). Mainly this is because certain themes, such as shop-lifting, always remain relevant. And in the future I think the subject was handled a little better and with more depth than we see here.

Cathy is told at the end of the episode there will be no further action and Mr Mitchell advises her to settle her differences with Trisha. With Cathy’s delinquent streak only lasting two episodes it does feel rather rushed. When Grange Hill next tackled shop-lifting (about a decade or so later) the story was allowed more time to develop which meant that the ramifications for a character who had previously (like Cathy) led a blameless life carried greater weight.