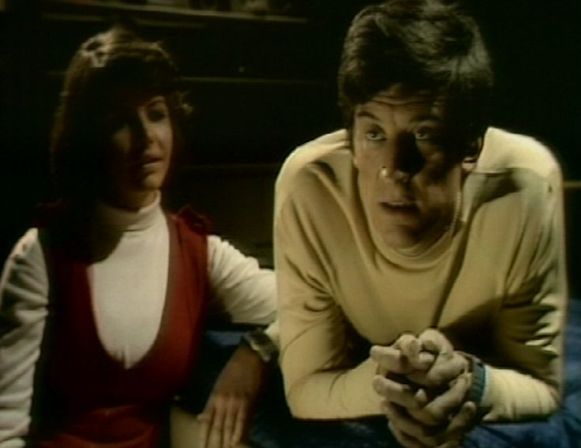 Moonbase 3 is under pressure.  Part of the reason for the base’s existence is to carry out scientific research projects – several look promising, but Caulder needs one of them to show definite results.  And the sooner the better since Franz Hauser (Victor Beaumont) is on the way from Earth for an inspection.

Hauser is one of the people responsible for Moonbase 3’s appropriations budget.  If Caulder can’t prove that any progress is being made, it’s possible their funding will be drastically cut.  Mineralogist Peter Conway (John Hallam) may be close to a breakthrough, but he tells Caulder that nothing’s certain yet.  When Caulder complains that they’ve spent too much money for negligible results, Conway counters that that’s the price you pay for research.

Stephen Partness (Tom Kempinski) is also working hard and seems close to success in his field.  Partness has ruffled more than a few feathers, including Caulder’s, but if he can come up with something then presumably all would be forgiven.

Outsiders was the second script penned by John Brason.  Whilst the three previous episodes have all had their dark sides, Outsiders is the bleakest yet as there’s precious little comfort that can be taken from the conclusion of the story.

Peter Conway seems, at times, to be a deeply unhappy man – although his lapses into melancholy are only temporary.  But Dr Smith has noticed his changing moods and is concerned.  It doesn’t appear that his problems are connected to the stresses of living on the Moon – it’s probable that he would feel the same back on Earth.  Conway is just grasping for the reason why – there must be some other truth, he says, than just scientific truth.  During the course of an intimate counseling session with Helen in his cabin he remarks that “I can see that a tap for water is a great convenience, but something went out of the world when we stopped going to the communal well.”

Hallam’s excellent in this scene, as he is throughout the story.  Helen decides he’s a man out of time – a romantic – who seems to be cast adrift in a hostile environment.  She ends their discussion by kissing him on the lips.  It’s notable that this is the second episode in a row where she’s become attracted to one of her subjects.

The uneasy compromise between pure scientific research and the necessity to generate a profit is an interesting theme which is well developed here.  Given the expense of space research, it’s reasonable that the European government would seek to try and recoup as much money as possible – but research isn’t something that can be hurried (or if it is, then mistakes can occur).

But everything seems to be going Caulder’s way when both Conway and Partness announce that they’ll be able to demonstrate their successful processes to Hauser. However, Partness has faked his work in order to try and keep his career afloat.  He was on the verge of something, but the pressure of having to produce instant results meant that he resorted to subterfuge in order to buy himself a little more time.

It doesn’t take long before the truth comes out, although Caulder is able to keep it away from Hauser.  And whilst Caulder is a moral and honest man, he has no scruples in covering up Partness’ falsifications for the good of the base.

Conway’s breakthrough is highly significant, but he’s become increasingly detached and decides that he no longer wishes to continue living.  He dons a spacesuit and walks out onto the Moon’s surface, leaving the following note behind.

It is the coming of a new age in which I have no place. The new truths are not my truths. I think I am the perennial dodo. I belong to a thing like Athens, a mother of a mode of life which shall renew the youth of the world. A thing like Nazareth. Change is a delusion. It is of new things that Men tire, of fashions and proposals and improvements. ‘Tis the old things that are forever young. I have no place here. It is time to leave.

The death of Conway does give Partness a second chance.  Caulder was initially planning to send him back to Earth as soon as possible, but partly because Conway respected him, Caulder allows him to stay and finish his research.  It’s about the only crumb of comfort that can be taken from the events of the episode.

Outsiders might just be my favourite episode of Moonbase 3, thanks to the fine performance of John Hallam.