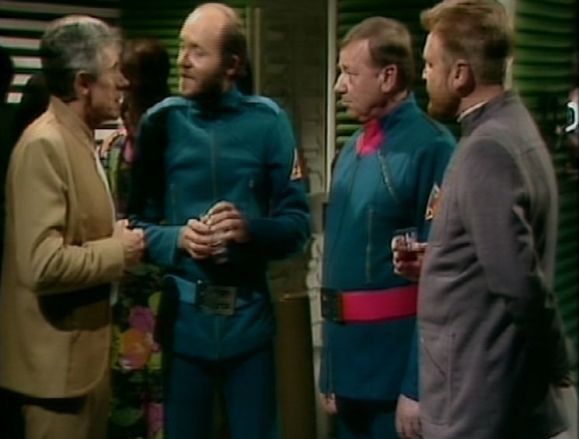 Moonbase 3 hosts a reception for a group of Russian dignitaries.  Their party includes the top cosmonaut Colonel Dimitri Gararov (Milos Kirek) who’s delighted to finally get the chance to meet Tom Hill.  In his day Tom was a notable astronaut and Gararov makes no attempt to hide the admiration he feels for him.  As he said, during training whenever a tough question was posed, he’d ask himself what Tom Hill would have done in such a situation.

The leader of the Russian Moonbase, General Alexis Trenkin (George Pravda), has an interesting meeting later with Caulder.  Caulder is very keen to try and interest the Russians in a joint project.  Since Europe are very much the poor relation in space, teaming up with the Russians on a prestigious venture would be a certain way to increase their funding.  Trenkin casually tells him that for 350 million they could be a partner in a proposed manned flight to Venus.

But any thoughts of co-operation seem to be unlikely after Tom runs into difficulties whilst on a routine mission to service a malfunctioning satellite.  A faulty computer command has sent his capsule spinning out into deep space.  He can be rescued, but it would take a top astronaut to do so – somebody like Gararov.

Trenkin flatly refuses to send him as Gararov is soon to depart for a new orbital station, so he’s not prepared to risk his life.  But Gararov decides to go anyway, which naturally pleases Caulder – but Trenkin’s displeasure becomes apparent when he requests that Caulder is removed from command during the remainder of the rescue mission.  Lebrun therefore takes charge, but since he’s already questioned the wisdom of the mission, will he be prepared to make the right call at the critical moment?

After a run of episodes with similar themes, John Lucarotti’s Castor and Pollux makes a refreshing change.  For once, there’s no unstable personalities – instead the drama comes from the rescue mission.

The debate over how to rescue Tom highlights the differences between Caulder and Lebrun.  Caulder will not accept for even a moment the possibility that a rescue is impossible and he’ll do anything in order to make it happen.  If it means that his cherished dream of collaboration with the Russians is scuppered, then so be it.

Lebrun, on the other hand, maintains an icy detachment for most of the story.  He professes to be sorry about Tom, but he considers that he’s as good as dead – and if so, why risk more lives in a futile rescue attempt?  The irony is that he’s the one who finally orders Gararov to make the very risky manoeuvre that ultimately saves Tom’s life.  He later says that it was the logical choice, but it was still a gamble – and had it not worked it would have been his career on the line.

Castor and Pollux is a good story for Barry Lowe.  Tom Hill’s by far the most naturalistic of the male leads (Donald Houston’s Caulder frequently lurches over the top whilst Ralph Bates’ Lebrun tends to be rather wooden) and this episode helps to fill in some of his back-story.  A respected and highly experienced astronaut, his current work on Moonbase 3 might be seen as something of a comedown, but Caulder is well aware just how important he is.  As he says, it’s Tom that keeps them all alive – and in the unforgiving vacuum of space that’s a vital skill.

Moonbase 3 was never the fastest paced of series and it’s fair to say that this episode is slower than most.  Since the bulk of it revolves around Tom’s problems, there’s an awful lot of scenes showing people gazing anxiously into monitors whilst Tom flicks buttons in his capsule.  Modelwork is also fairly limited, which probably reflects the series’ fairly low budget.

It’s always a pleasure to see the dependable George Pravda.  Born in Hungary, he carved out a very decent career playing a variety of East European nationalities, including Russians of course.  And whilst he stumbles over a few early lines, Milos Kirek is solid as Gararov.

Although the current political climate is rarely touched upon during the series, we can assume that by 2003 (the year in which Moonbase 3 was set) the Cold War has ended.  There seems to be no mistrust of the Russians, for example, and Caulder’s desire to work with them (plus Trenkin’s comment that if the Europeans aren’t interested in a joint venture to Jupiter, they’ll approach the Americans instead) confirms that.

With the fairly down-beat endings we’ve seen so far, you could be forgiven for expecting this one to finish badly as well.  But for once, there’s a positive outcome – Tom is rescued and both he and Gararov make it back safely.  Trenkin is pleased and this demonstration of European/Russian co-operation only seems to have strengthened any possible future alliance.