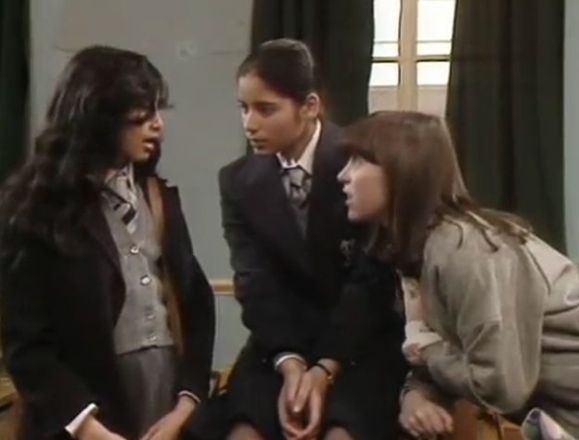 A new girl, Fatima Bibi (Belgit Gill), is placed in the care of Sudhanami Patel (Sheila Chandra).  This seems to be because Fatima doesn’t speak any English and the assumption appears to be that Sudhanami will be able to communicate with her.

But it becomes clear very quickly that Sudhanami isn’t going to make any headway.  Mrs Conrad (Margaret Stallard), the teacher responsible for working with pupils who need to increase their English language skills, is quick to grasp the gulf between Fatima and Sudhanami.  Sudhanami comes from Uganda and Fatima hails from East Pakistan.  The unconscious racism on the part of the other members of staff who’d obviously assumed they’d be able to communicate is never directly commented upon, but is clear enough.

Grange Hill has, from the first episode, been a multi-cultural school, but it’s rarely something that’s been a central part of any ongoing story.  True, Benny did receive taunts about the colour of his skin in some of the early episodes, but he was also bullied because his family was poor.  This episode is therefore notable since it attempts to deal with two thorny topics at once – the problems of how those newly arrived (like Fatima) integrate into British society but also how the people already established (like Sudhanami and her family) adapt to the culture around them.

Fatima is a one-shot character and won’t be seen again after this episode.  This it’s a bit of a shame, since there would have been some mileage in showing her develop.  But Sudhanami does remain a semi-regular for a while (up until the end of series four).  She’s rarely central though, so this is really the one episode where she moves to the heart of the story.

Her father, Mr Patel (Minoo Golvala), wants to transfer her to an all girls school.  He seems to be almost a caricature of a traditional Indian father – he hates the fact that she goes to school with boys, listens to pop music, etc.  All this does rather beg the question as to why he allowed her to go to Grange Hill in the first place.

Although a strict traditionalist (he expects her to help in the shop and is reluctant to allow her to spend time with her friends outside of school hours) it’s clear that he does genuinely love her and has (or at least he believes he has) her best interests at heart.  As for Sudhanami herself, she’s somewhat submissive and is happy to follow her father’s directions.  If he decrees that she will take part in an arranged marriage sometime in the future, then that’s what will happen.

This may be an accurate, although not terribly progressive, portrait of the times – but it’s notable that as the series progresses we’ll tend to see children who will be much less prepared to toe the family line.  Instead they’ll be keen to embrace all that Western culture can offer, irrespective of what their parents may say.

Although this is a fairly serious episode, there are a few lighter moments.  Trisha and Cathy are aghast to find that Miss Mooney and Mr Sutcliffe are engaged – Cathy earlier remarked that Mr Sutcliffe “wouldn’t marry a thing like that”!  Trisha and Cathy also attempt to teach Fatima some useful phrases such as “Flippin’ ‘eck” and “Shut yer mouth”.

Tucker’s artistic flair is put to good use again when he designs a cut-out figure for the school fair.  The teachers line up to put their heads through the opening and have to suffer wet sponges being thrown at them.  It’s all for a good cause, so they can’t complain, and naturally the pupils are delighted for the chance to take their revenge – especially on Mr Baxter!