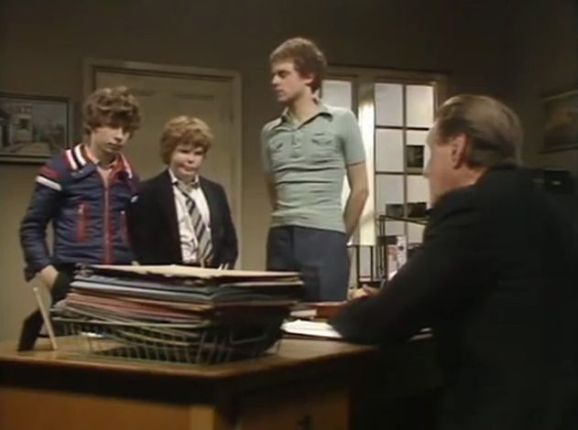 The attempt to establish a permanent Outdoor Centre picks up a little pace in this episode.  Mr Hopwood has found the perfect place (the pupils already visited there in episode three).  The owner of the property was impressed by the way the pupils helped to put out the fire during their last visit (although if he knew they were responsible for starting it in the first place he may not have been quite so understanding!)

But since he remains in ignorance, he’s happy to let the property for a nominal fee for the next year – provided the school can find the money to repair the derelict building.  This, of course, is where the problems begin.  Funds for extra-curricular activities have always been difficult to come by – and the early 1980’s was an especially cash-fraught time.  Mr Keating, deputising for the (by now always) absent Mr Llewellyn doesn’t dismiss the plan out of hand, but it’s obviously going to be a considerable struggle to bring these plans to fruition.

The main part of the episode revolves around Pogo’s money-making plan to establish his own school tuck shop (since the official one still hasn’t been approved).  This does mean turning his mother’s kitchen upside down in order to keep making all the cakes he needs in order to fulfill his orders.  When poor Mrs Patterson surveys the mess she says that whilst she was happy for him to make a few cakes she didn’t realise he’d be attempting to rival Mr Kipling!

Pogo and Duane’s free enterprise did have the tacit approval of Mr Sutcliffe, who was also a willing customer.  In fact, the original clamour for alternative food arose after Mr Sutcliffe blocked Mr Garfield from arranging the tables in the canteen for lunch.  Mr Sutcliffe was taking a drama class at the time and didn’t understand why the caretaker had to disrupt his class when it was only mid-morning.  Mr Garfield, being the inflexible man he is, was happy to walk away and do it later – though this meant delaying the start of lunch and thereby creating a whole group of willing customers for the few cakes that Pogo and his friends already had on them (which they made earlier on in their cookery class).

Sadly, Pogo’s tuck shop comes to an ignominious end after Mr Keating becomes aware of it.  He starts by giving a dressing down to Mr Sutcliffe, who he says should really have known better, but then he has some good news.  The school tuck shop will be going ahead – and Mr Sutcliffe, Pogo and Duane seem like the ideal people to help run it (they’re clearly not in a position to refuse).

And Mr Keating also has some not-so good news for Pogo and Duane – a series of detentions as well as an essay to be written by them entitled “the problems of private enterprise in an authoritarian society”!