Once Blake, Avon and Jenna have learnt a little about the new spaceship they’ve “acquired” (and also tangled with the mysterious super-computer Zen) they set a course for the prison planet Cygnus Alpha.  Once there, Blake is keen to free as many of the prisoners as he can – he needs a crew to start fighting the Federation.  But the charismatic ruler of Cygnus Alpha, Vargas (Brian Blessed), needs new recruits to serve his god and he isn’t going to give them up without a fight …..

Cygnus Alpha is a story of two halves.  Later we explore Cygnus Alpha and Vargas’ weird religion, but to begin with we follow Blake, Avon and Jenna as they start to evaluate the Liberator and slowly begin to understand its capabilities.  Blake remarks that the design is alien – it certainly doesn’t appear to be of Federation origin.  In story terms of course, it’s handy for Blake’s small group to have such an advanced ship – otherwise their battle against the Federation would have been rather brief.

If you accept this as a dramatic requirement, then you also have to turn a blind eye to the fact that the Liberator has a well stocked arsenal of weapons and a teleport system which means they never have to land the ship, handy that!  At this point, they can only remove one gun each (“single function isomorphic response” as Avon puts it) although this is a convention that’s later blithely ignored.

The teleport system is the closest link to Star Trek – and as in the American series it’s a device that is frankly just too useful.  The ability to teleport anybody out of danger at any time is a problem, so during the course of the series we’ll see various ways used to limit its power.  Sometimes the Liberator will be forced to leave teleport range (because of incoming Federation ships) and on other occasions, like here, the loss of a teleport bracelet will prevent a quick escape.

One oddity in this story is that at the end there appears to be two teleport areas.  We see Blake, Vila and Gan appear in the usual one and then Vargas seems to materalise in another teleport area on the opposite side.  Although it’s possible this is just a bad piece of editing, since this secondary teleport area (if that’s what it is) is never used again.

Shortly after finding the guns they encounter Zen (voiced by Peter Tuddenham) for the first time.  As he’s got such a clear personality it’s no surprise that Blake later claims him as one of the seven.  But as the following exchange illustrates, Zen has boundaries that he’s not prepared to cross.

BLAKE: Zen, how does the teleport system work?
AVON: Would its function be injurious to our species? Have you the necessary data?
ZEN: Wisdom must be gathered, it cannot be given.
AVON: Don’t philosophise with me you electronic moron. Answer the question.

Zen doesn’t answer Avon’s question which infuriates him no end.  Avon vows to reprogram the computer, but it’s probable that he’s met his match. 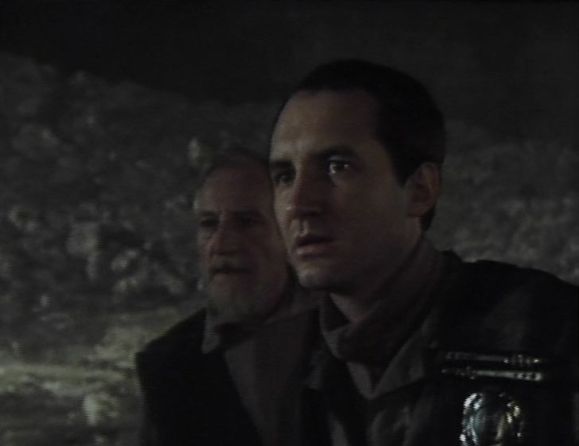 Down on the surface of Cygnus Alpha things are grim – as might be expected of a penal planet it’s a pretty bleak environment.  There is a smidgen of civilisation though – led by Vargas and Kara (Pamela Salem).  They, and the others, worship their god in a quasi-medieval setting.  New prisoners (or as Kara refers to them “new souls for the faith”) are therefore always welcome – though it may not come as a surprise that Vila’s far from keen.  When Gan spies a building, he asks Vila what he thinks.  “The architectural style is early maniac” he responds.

Apart from Gan and Vila, we see a couple of new prisoners – Arco (Peter Childs) and Selman (David Ryall).  Well, I say new, but they must have been aboard the London, so we have to assume they were always just out of shot in the previous episode. Either of these actors would have livened up Blake’s crew (I certainly would have taken Arco over Gan).

Whilst Blake’s recruiting members for the cause on Cygnus Alpha, Jenna faces a moral dilemma aboard the Liberator.  She’s discovered a room with untold riches, which certainly appeals to Avon.  He’s keen to take the money and run as he tells her that Blake would “look upon all this as just one more weapon to use against the Federation. And he can’t win. You know he can’t win. What do you want to be, rich or dead?  We might never have this opportunity again.”

Jenna agrees, although she decides to wait for an hour to see if Blake contacts the ship.  But when it comes to the crunch she can’t leave him – and neither, it appears, can Avon.  Why Avon doesn’t jump ship at the next available port with as much wealth as he can carry?.  Could it be that he too is beginning to believe in Blake’s crusade?  It seems improbable, but Avon’s motivations aren’t always easy to read (compared with how transparent Blake is) so it’s hard to say for sure.

The surface of Cygnus Alpha might only be a quarry, but the location benefits from extensive night shooting, atmospheric dry ice and some decent matte effects.  The interiors are more conventional and look like they could have been drawn from stock, but are reasonably solid.

Just two episodes after the nihilistic opener, we’re into something totally different here. Cygnus Alpha is much more conventional adventure series fare – complete with an over-the-top villain in Vargas. Brian Blessed could do this sort of performance in his sleep (possibly he did!) and whilst he’s undeniably a powerful actor, it’s hard to take Vargas very seriously as we know it’s only Brian Blessed dialing it up to eleven.

By the end of the story, Blake has been able to rescue Vila and Gan, so his band of brothers has got slightly bigger. It still seems that they’re very few to be thinking about launching an all-out attack on the Galactic Federation, but for a true fanatic like Blake that’s not something that’s going to bother him. 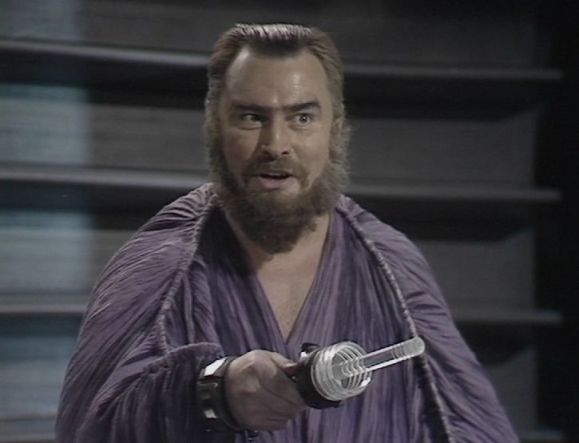