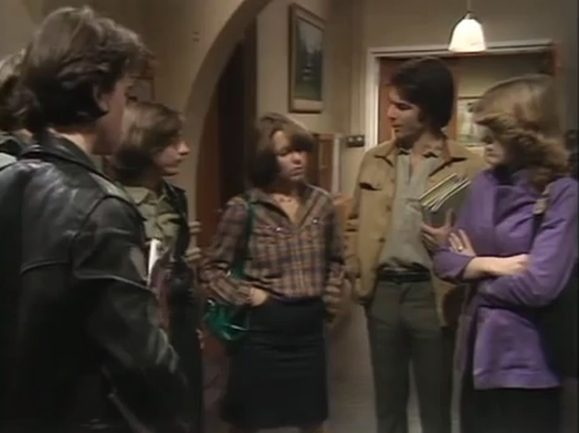 Trisha and Cathy are still irritated at not being allowed into the school until the fifth and sixth-formers let them in. One obnoxious older pupil (played by Peter McNamara) is especially officious, although Trisha takes her revenge by aiming a swift kick at his shins as she walks past him!

The plan of action, headed by Trisha and Susi, continues to rumble on – as they attempt to organise a fact-finding mission to establish whether everybody is in favour of common rooms. It’s not easy going though and Susi begins to have doubts about the effectiveness of what they’re doing.

This then leads into a very interesting two-handed scene between Tucker and Susi. Since they’re diametrically opposed characters it’s rare that they’ve ever shared any scenes together. What’s even more noteworthy is that Tucker is supportive towards her. He tells her he has no doubts about his abilities (he’s in the library working on his design for the cover of the school magazine) and urges her to have more confidence as well. Had any of the other pupils been present it’s unlikely he would have been so forthcoming, so this offers a nice insight into the more thoughtful side of Peter Jenkins.

Of course, when the others are around Tucker can’t help himself by bragging that his design is bound to win the competition. Such obvious boasting naturally irritates Doyle and together with his two new henchmen – Robo (Neil Rogers) and Macker (Alan Gibson) – he plans to do something unpleasant to Tucker’s design. This is signposted so clearly that it’s a little surprising when it doesn’t happen – and a further wrong-footing move happens in the next episode (somebody does destroy it, but it’s not Doyle).

There’s a small, but significant, character moment when Doyle senses that the others are reluctant to help – he reminds them that he’s paying them so he expects their full co-operation. Is Doyle such an awful person that he can’t even find a single friend without a monetary inducement? It’s just a throwaway touch, but it’s quite illuminating.

We also get a taste of the song that Cathy, Ruth (Paula Harris) and Gerry (Karen Saunders) will be performing in the next episode.

Re-watching this episode, something which stands out is that both Miss Mooney and Susi McMahon are present but neither utter a single word. It does seem strange to have two regulars in the studio but for them both to remain mute – so maybe scenes for several episodes were shot on the same studio day? That would make some sort of sense.

In many ways this episode is merely setting the ground for the next one – which will conclude a number of plotlines (notably it’ll see the final confrontation between Booga and Tucker).