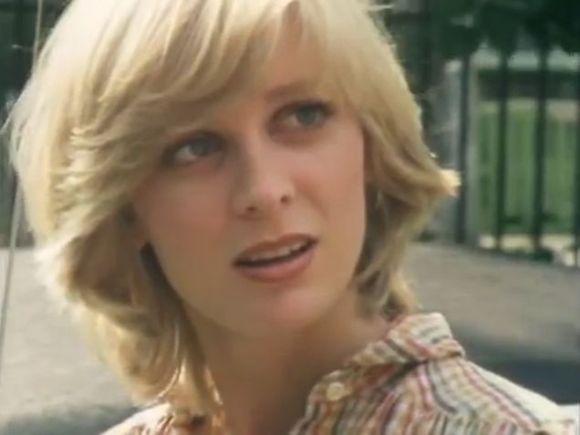 Danny Taylor (Peter Hopwood) is a Grange Hill archetype – the money-making entrepreneur.  He doesn’t reappear after this episode though, which makes me wonder if he was drafted in as a late replacement for Pogo – who’s already shown an interest in get-rich schemes (which fail dismally, of course).

Danny’s wheeze is to organise a lottery, but he falls foul of Gripper who has his eyes on the main prize.  The most interesting part of this section of the episode are the opening moments – Stewpot calls round for Danny and is waved into the house by Danny’s father (who is obviously something of a wheeler-dealer himself).  Danny has inherited his father’s drive to make money and this is viewed with irritation by Stewpot.  He reckons that within a few years Danny will be sitting behind a desk and making money from other people’s efforts.  Stewpot tells him that come the revolution things will be very different!

When Gripper’s not attempting to rig the lottery (although it’s interesting that his plan is somewhat elaborate – in years to come he’d just have taken the money) he’s running foul of Mr Baxter on the football pitch.  After Gripper harshly tackles Matthew Cartwright, Mr Baxter makes it plain that he won’t tolerate any repetition.  And if it did happen again, Gripper would be the one on the ground and Mr Baxter would be standing above him, putting the boot in.  Nowadays any threat of violence from a teacher to a pupil would be viewed as an empty one – but 1981 was a different era and Gripper takes Mr Baxter’s words seriously.

Karen Stanton (Carey Born) makes her only series four appearance.  She cuts a very woebegone figure as she confides to Claire that all is not well at home – thus sowing the seeds for a later episode featuring Karen’s brother, Andrew.

Miss Lexington continues to be an object of fascination for many of Grange Hill’s pupils.  Duane’s puppy love is quite evident (he’s always popping up and asking to carry her bags) but there’s other examples as well.  Two older pupils use their time in Miss Lexington’s computer club to program a rough approximation of the female form with the words “Sexy Lexi” next to it.  But when Miss Lexington sees it she simply gives them an indulgent smile and moves on.  Is she something of a tease or simply unaware of the effect she has on certain people?  However you want to interpret her character there’s no doubt that Allyson Rees’ wide-eyed performance is terribly appealing.

Miss Lexington’s later run-in with Mrs McClusky is a highlight of the episode.  What makes their clash so intriguing is the fact that they’re such different character types – Miss Lexington is relaxed and carefree whilst Mrs McClusky is strict and unyielding.  The headmistress views the scruffy appearance of Miss Lexington’s class with extreme disfavour and she tells the younger teacher that their planned trip to the Silicon Chip factory is cancelled.  Mrs McClusky is simply not prepared to let such an untidily dressed bunch of pupils represent the school.

This is the first step in Mrs McClusky’s desire to bring back school uniform.  That obviously wouldn’t go down well with the pupils, but on the evidence of these early series four episodes it’s plain that Mrs Clusky is someone who is always determined to get her own way …..