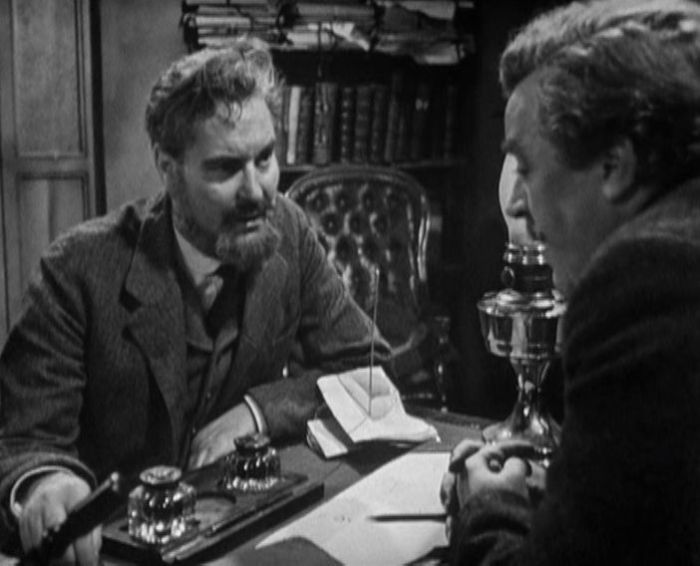 The army are called in to keep the peace during an industrial dispute – but when one of the strikers is shot dead it falls to Cork to investigate.  However, what appears to be a straightforward case turns out to be much more complicated.

Cork is the only man for the job, according to Supt. Nelson.  This irritates Inspector Bird who offers to lead the investigation himself – the way Nelson hurriedly turns down his kind offer is a clear indication that Bird (whilst Cork’s superior in rank) is decidedly his inferior as a police officer!  After Cork leaves, Bird has to grudgingly admit that he’s a decent officer, but believes (as does the audience, no doubt) that his abrasive manner will not go down well with the army bigwigs.  Nelson does give Bird another reason as to why he chose Cork.  Apart from his undoubted investigative qualities, Cork’s public profile continues to rise and his verdict, when reprinted in the newspapers, will carry more weight than most.  It’s another indication that the Sergeant enjoys something of a celebrity status, although it’s not something he trades on.

Like Cork and Marriott, the audience comes to the investigation with no knowledge as to exactly what happened.  Although the episode opens with the strikers confronting the army, when the shot was fired the camera was elsewhere.  Was the murdered man an agitator (as Major Edwards says), in the wrong place at the wrong time or killed for another reason?  Edwards (Basil Henson) makes his position clear from the start.  “The army doesn’t have to give reasons for what it does, it conducts its own investigations and I advise you to leave well alone before you find yourself in trouble. Clear?”  No surprise that Cork isn’t at all intimidated and instead continues to ask questions.

The murdered man, Strong, had been keen to stand up for his rights.  His brother Alf (John Boyd-Bent) makes this point forcibly to Cork and the union leader Ned Fisher (Charles Morgan) agrees (Morgan would become a very familiar face in the later run of the series, he returned for a lengthy spell as Supt Rodway).  The resentment felt between the workers and the management is spelled out by Fisher.  The workers were striking for an extra four-pence a day – and with the fruits of their labours (luxury furniture) being sold for a healthy profit, this seems a reasonable request.

Although Major Edwards and Cork didn’t exactly hit it offer when they first met, they do reach a rapprochement after Cork proves that the private soldier who claimed to have shot Strong couldn’t have done so.  Strong was killed by a revolver bullet, not one fired from a rifle, and the soldier had lied to cover up that he’d lost his rifle in the melee.  So could the factory owner Charles Robinson (Neil Arden) be responsible?  His dislike of Strong was well known and his death certainly seemed to meet with his approval.  If not Robinson, then Cork will have to cast his net even wider – maybe one of Strong’s fellow strikers pulled the trigger?

It’s probably not too surprising that the murderer turned out to be someone close to home – Cork was a fairly traditional series and a straightforward theme of social unrest would have been rather outside the series’ remit.  Instead, we have a reasonably satisfying whodunit with a light dusting of social history (poor working conditions, the army called in to keep the peace, etc).

The Case of Soldier’s Rifle was the second of two scripts by Bill Macllwraith (the first was The Case of the Two Drowned Men).  Interestingly, Macllwraith would later work on another Victorian detective series – Cribb.  Based on the novels by Peter Lovesey, it would be easy to imagine that Lovesey had been influenced by Cork (although he’s never said so).  But for anyone who enjoys Cork, Cribb is also well worth your time.

John Boyd-Bent (Alf) gives a rather broad performance, as does Jane Wenham as Strong’s widow, Ivy.  I wonder if this was more down to Macllwraith’s scripting, since The Case of the Two Drowned Men also had its fair share of histrionics?  The whodunit angle isn’t as satisfying as some of the other episodes, as the characters aren’t as well drawn (so don’t invite our sympathy or interest) but it’s still an amiable enough way to spend fifty minutes.