Skip to content
HomeArthur C. Clarke’s Mysterious World – The Riddle of the Stones 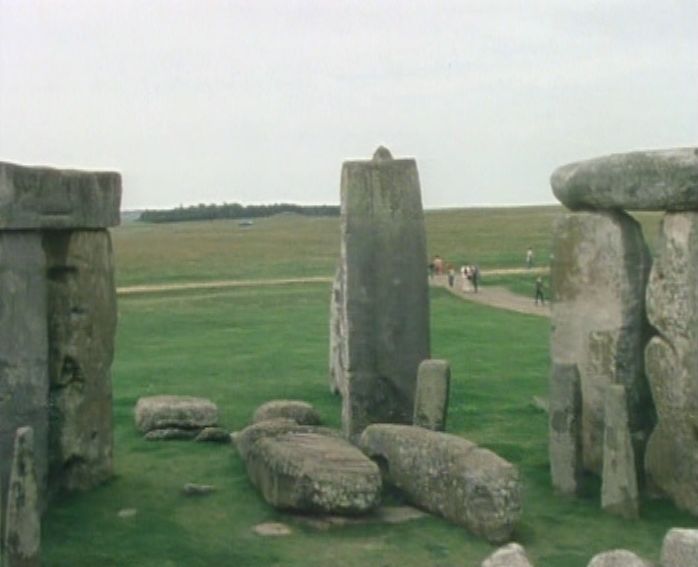 “Why did the people of prehistoric Britain set up the great stone circle on Salisbury Plain? What is the meaning of Stonehenge? Were Britain’s other rings of stone centres of an unknown Pagan cult? Were they places of sacrifices and death? Were they observatories where, four thousand years ago, astronomers plotted the courses of the sun, moon and stars?”

This edition of Arthur C. Clarke’s Mysterious World sets up a great many questions, so it’ll be interesting to see if it can come up with any answers.  But what’s clear from the start is that Arthur has little sympathy with “latter-day druids” who have claimed the likes of Stonehenge for themselves.  “Their association with stone circles is the invention of eighteenth century romantic writers.  The druids flourished a thousand years after the completion of Stonehenge, so to confuse them with stone circles is like mixing up the Battle of Britain and the Battle of Hastings.”

The megalithic tomb at Newgrange in Ireland is described as an almost unknown wonder.  Built over five thousand years ago it’s certainly an impressive sight.  Professor Michael O’Kelly, who was responsible for restoring it to its former glory, describes how he began to believe that the ancient builders of Newgrange had designed it in such a way as to allow the rays of the sun to illuminate the tomb on certain days – most especially the 21st of December (the Winter Solstice).  He describes how, on the 21st of December 1967, he stepped into the tomb to prove his theory.  This turned out to be correct, as he witnessed the chamber being illuminated with the bright winter sunshine.  This webpage has more detail on both Newgrange and Professor Kelly.

That Newgrange was designed to take account of the movement of the heavens seems clear and it’s also been supposed that some stone circles were created to serve as observatories – allowing ancient astronomers to use them as gigantic calendars (back then, knowing what time of the year it was would have important in many ways).

It’s a little odd to watch somebody clambering over the top of Stonehenge – it’s hard to imagine that happening today.  Richard Brickerhoff did so to test a theory that the strange bumps in some of the stones were evidence of a particular type of astronomical practice that had been carried out thousands of years ago.  It’s a nice enough theory, but doesn’t really convince.  Although Arthur admits that some stone circles do show evidence of astronomical alignments, he suggests that most could be nothing more than meeting places.

Some places continue to baffle though, such as Avebury in Wiltshire.  Containing multiple stone circles, it’s a particularly impressive construction feat – especially when you consider how difficult it would have been to move stones that weighed sixty tons (hundreds of people would have been required to move just a single stone).

The mystery of the stone circles is nicely summed up by Dr Aubrey Burl.  “It’s like reaching out into the darkness, you can go so far but in the end you can never touch them. You’re always reaching for a shadow.”  When so many experts are only too happy to spin extravagant theories, it’s refreshing to hear from someone who doesn’t claim to have all the answers.