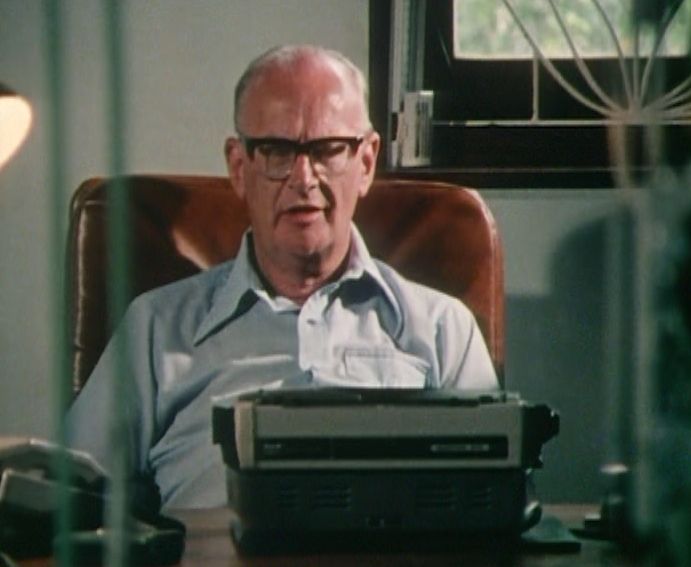 “Why do stones move all by themselves in California’s Death Valley? Can frogs and toads really live for centuries entombed in solid rock? Do the mountains of Mongolia still harbour neanderthal man?”

The last episode of Arthur C. Clarke’s Mysterious World, Clarke’s Cabinet of Curiosities, is a handy way to include some strange mysteries that might not fit in with the themes of the earlier editions.

It begins in Death Valley, California where tracks in the ground indicate that rocks seem to have dragged themselves across the arid desert surface.  What adds to the mystery is that in the hundred years or so since the phenomenon was first noted nobody has actually seen them move.  Dr Dwight Carey’s theory involved abnormal weather conditions – which was certainly on the right track – although it wasn’t until recently that the mystery was finally laid to rest.  The solution can be found here.

Crail in Fife is our next destination, where the topic of ball lightning is examined.  This had already been discussed briefly in the first edition (we again see the footage of the plucky cafe owners and hear the tale of the speedy exit of the man with the wooden leg!) but here there are also theories proposed as to what it might be.  Professor James Tuck, who helped to create the atomic bomb, had been working on experiments in America to artificially create ball lightning.  He certainly generated something – which he admits may or may not have been ball lightning – but the debate about what ball lightning actually is rages on.  Even today there’s no common consensus, but this webpage has some of the more recent theories.

The Minnesota Iceman is a strange story.  It surfaced in the late 1960’s and was purported to be a neathandal man encased in ice.  He became something of a minor celebrity, appearing at numerous fairs and sideshows, before mysteriously vanishing again – although he returned to the limelight fairly recently.  The fact that he’s never been made available for rigorous scientific research would tend to indicate that he’s a fake, but reports of neathandal men spotted in Mongolia suggest that maybe, just maybe, the Minnesota Iceman was real.

Frogs encased in solid rock is another odd mystery for which there’s no answer.  In his closing piece to camera, Arthur says that “even if we solved all the mysteries in this series there’s plenty more where they came from. For our universe is not only more mysterious than we imagine, it is more mysterious than we can imagine.”

Even after thirty five years, Arthur C. Clarke’s Mysterious World still stands up.  If some of the mysteries now have solutions, there are still plenty that don’t and, as previously touched upon, whilst the twenty five minute running time of each edition means that many topics could only be touched upon briefly, the series still managed to cover a considerable amount of ground.